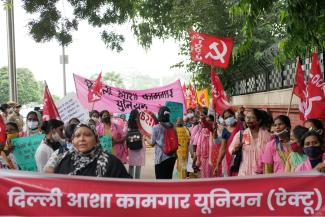 The Covid 19 pandemic has brought to the forefront the importance of ASHA workers in running and sustaining the public health care system. Since the pandemic broke out ASHA workers have been working as frontline workers against the coronavirus outbreak, performing important tasks like disease surveillance, reaching out to infected patients with medicines, conducting daily temperature checks in neighbourhoods and encouraging people to get vaccinated against the virus. But little is known about the fact that most of the work done by ASHAs goes unnoticed and is grossly underpaid. To begin with, ASHA workers were meant to carry out tasks around healthcare for children and pregnant and young mothers. But during the course of the pandemic, they have been made to bear the brunt of most of the work in the public health system with little or no pay and zero recognition of the risks they have taken by putting their own lives in danger while carrying out their responsibilities. An overwhelming number of ASHA workers across the country did not even get basic equipment like masks, face shields, gloves and sanitizers during the covid pandemic. On top of being perennially underpaid, receiving just Rs. 3000 as honorarium for their regular work, they received a pittance of Rs. 1000 as bonus for the extra work they performed during the pandemic. Despite this they have received scant recognition for the crucial role they performed as frontline workers.

To highlight the apathy with which they are regarded, the Delhi ASHA Kamgaar Union affiliated to AICCTU, conducted a sample survey of over 200 ASHA workers across 10 dispensaries in Delhi. The findings of the survey paint a stark picture of the underpaid and exploitative working conditions that ASHA workers have to face day in and day out. It also shows that little respect that is paid to the labour of ASHA workers who work in undignified work conditions. The important findings of the survey are as follows:

• Nearly all the respondent ASHA workers said they have no fixed working hours and are on call 24x7, which means they are perennially on standby mode to respond to any emergency. While they are on call throughout the day, they receive no allowance for this. They do not get and not even entitled to, any overtime payment.

• 86% of the respondents said they do not receive a fixed remuneration for the work they do. This is despite the fact that ASHA workers who were surveyed had an average work experience as ASHA of six and a half years. This clearly means that the problem of not receiving any fixed remuneration is a long standing one.

• Most ASHA workers are supposed to receive Rs. 3000 per month as honorarium. This is much lower than the legally mandated minimum wages for workers. The sheer cruelty of this becomes starker when seen along with the finding of the survey that 30% of the respondents said they are the only earning member in the family, which means their family survives on the Rs. 3000 they earn as honorarium.

• In addition to the pittance they receive as pay, 66% of ASHA workers surveyed said some amount is regularly deducted from their monthly pay on some pretext or the other.

• On an average each ASHA worker covered 550 households as part of their work during the covid pandemic performing a variety of tasks. For this work they received an average of Rs. 180 per ASHA worker pointing to the fact that remuneration paid to ASHA workers are completely arbitrary, unjust and irregular.

• 90% of the respondents said there are no restrooms available for their use in the dispensaries.

• About 45% of ASHA workers said they regularly face misbehaviour and harassment from their superiors at their workplace.

• Family members of many ASHA workers were infected with the virus both in the first and the second wave but barring a few exceptions, ASHA workers got no help from the government for their treatment.

From the above findings a clear picture emerges of the underpaid and exploitative nature of the work that ASHA workers do. Trade unions of ASHA workers and trade unions in general have been saying for years that ASHA workers are one of the most underpaid and overexploited members of the working class. Despite the invaluable service they have provided during the course of the pandemic, only lip service has been paid to them without guaranteeing their rights and dignity. The findings presented here are preliminary findings from the survey conducted by the Delhi ASHA Kamgaar Union.

A detailed report will be released very soon.