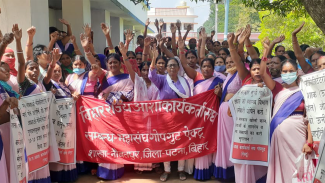 On the call of Joint Platform of Scheme Workers, ASHA, Anganwadi, Mid-Day Meal workers and various other sections of scheme workers unitedly held a successful one-day all-India strike on 24th September 2021 on demands including immediate demands of safety at workplace, risk allowance and insurance cover for Covid duty and long pending demands of regularization and recognition as workers, minimum wages, social security, pension and also against privatization. The strike across the country - from north to south and east to west - was massive and extensive with spirited involvement and good mobilization of workers at the grassroot levels, block and village levels, in various forms of action programmes. The strike also received a good media coverage (print, electronic and social media), particularly at state levels. The one-day strike clearly reflected the growing anger and resentment among scheme workers and their fighting mood against the conditions of slavery and against the inhuman treatment being meted out to them by the governments, particularly Modi led union government during the whole period of Corona.

Com. Shashi Yadav, Convenor of All India Scheme Workers’ Federation (affiliated to AICCTU), in her statement, termed the strike as historic and congratulated scheme workers for the success of the strike who braved various kinds of threat and intimidation and overcame all hurdles posed by the government administrations everywhere. She also congratulated the cadres of all unions for their tireless efforts in making the strike successful and extended greetings to the central trade unions, farmer organisations and various other organizations and common masses for lending support to the strike. She called upon scheme workers to remain prepared for bigger struggles in future.

In the national capital, “Delhi ASHA Kamgar Union” organized a protest march-cum- demonstration at Mandi House which saw an impressive and spirited participation of around hundreds of ASHA workers from a dozen different places. Protestors condemned the Delhi Police, which came under union government, for denying permission to take out a rally from Mandi House to Jantar Mantar and the Modi government for keeping the capital and the country in a state of an undeclared emergency. The protest was addressed by Comrade Rajiv Dimri, the General Secretary of AICCTU among others and by many ASHA workers. After the protest, a 5-member delegation, led by the union leader Shweta Raj and AICCTU state president Santosh Roy, met the Union Labour and Employment Minister Bhupendra Yadav, submitted a memorandum and apprised him of the demands of the strike. Preceding the strike, a campaign, “Postcard to the PM” highlighting the demands of ASHA workers was also organised on 17th September, the birthday of Mr Narendra Modi.

In Bihar, the strike was observed extensively across the state by workers of ASHA, Mid-Day Meal (Vidyalay Rasoiyas) and Anganwadi. The workers of various state schemes also joined with enthusiasm. Tens of thousands of workers participated in demonstrations and sit-ins, braving restrictions imposed by the government under the pretext of forthcoming panchayat elections. The strike of ASHA and Mid-Day Meal workers was led by comrades Shashi Yadav, leader of Bihar Rajya ASHA Karyakarta Sangh and Saroj Chaubey, leader of Bihar Rajya Vidyalay Rasoiya Sangh. Around 2 dozen districts including Patna were most affected by the strike of ASHA workers. Similarly, big demonstrations of mid-day meal workers were held at district and block headquarters in more than a dozen districts. In Bihar also, a strike preparation campaign was conducted in the form of meetings and conventions.

In U.P, thousands demonstrated at several places under the banner of AICCTU and affiliated unions of ASHA, Mid-Day Meal and Anganwadi workers while the most impressive participation was witnessed in Rai Bareli, Allahabad, Lucknow and Kanpur. A Demand Charter also was submitted to the authorities in all centres.

In Uttarakhand, the entire state including major cities like Nainital, Haldwani, Bajpur, Dehradun, etc., witnessed huge demonstrations by scheme workers, particularly ASHA workers led by AICCTU affiliated unions under the leadership of comrades Kamla Kunjwal, Rita Kashyap, Kailash Pandey and others. It is to be noted that only in the month of August this year, ASHA workers went on a strike, jointly with other unions including CITU, for about a month. Still, they never even hesitated a moment to join the all India strike too.

In Jharkhand, impressive demonstrations of mid-day meal workers were held in more than six districts including Dumka, Latehar, Mohanpur under the banner of Jharkhand Rajya Vidyalay Rasoiya Sangh led by com. Geeta Mandal.

In Orissa, big demonstrations were were jointly organised at Bhuvneshwar and Bhadrak districts. An impressive demonstration of mid-day meal workers was also held at Rayagada (Gunupur) by AICCTU led unions.

Scheme workers, led by AICCTU affiliated unions, observed strike and held demonstrations at various places across the country, including Raipur and Korba in Chattisgarh, Dibrugarh in Assam, Kolhapur in Maharashtra and North 24 Parganas in West Bengal.