West Bengal: Uncertainty in the Future of Jute Workers 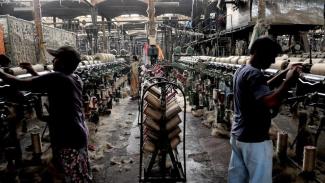 Agrave crisis is looming large in the jute industry of Bengal on which thousands of workers families and a vast section of jute growers depend on to earn their bread and livelihood. The century-old traditional labor-intensive industry employs more than 2.5 lakh workers. Of late, the textile ministry of central government informed the state that procurement from the industry will be slashed due to the dearth of gunny bags and 45 percent of synthetic bags will be allowed for packaging wheat in the forthcoming rabi season. This has sent ripples across the industry as well as within the labour and finance department of the state government.

During the tenure of late Prime Minister Rajiv Gandhi, parliament passed The Jute Packaging Materials (Compulsory Use in Packaging Commodities) Act,1987, by which the government is required to consider and provide for the compulsory use of jute packaging material in the supply and distribution of food materials as these bags are eco-friendly and bio-degradable. This Act came into force to prevent the usage of synthetic bags for packing food grains. Now, to appease the powerful lobby of synthetic bag producers, the central government has diluted the above Act. This would have a telling effect on the jute industry.

The jute industry is predominantly dependent on the government sectors that purchase jute bags to the tune of around Rs 7,500 crore every year for packing food grains. It enjoys a captive market for the last couple of decades and the decision to slash orders would have a disastrous effect upon the industry, particularly, on the workers. This decision of the union government will open the door for indiscriminate suspension of work, reduction in shifts and in workforce and in throwing tens of thousands of jute workers out of employment. A few months ago, when the second wave of Covid spelled a catastrophic effect on the state's economy, the traders of raw jute cum owners of the jute mills declared suspension of work in more than 15 jute mills rendering 40- 45 thousand workers out of employment under the pretext of shortage of raw jute. All the functional trade unions were of the opinion that the unscrupulous jute traders and hoarders deliberately created this artificial crisis and appealed to the Jute Commissioner of India (JCI) and the state government to take stringent action against illegal hoarding. The trade unions stated that if mills were shut due to shortage of raw jute, it would tantamount to encouraging lay-off and not suspension of work. The labour department do not entertain the disputes raised under Industrial Disputes Act, if it is suspension of work.

Neither previous regime of the Left front government nor the incumbent Mamata government has taken any constructive steps for amelioration and development of this industry till date. This agro-based industry and its eco-friendly product has gained tremendous popularity globally and the demand for value-added jute goods, luxury bags, curtains, dress materials have increased manifold. The property of tensile strength of jute aids in its use in a proper mix for repairing roads and embankments. Yet, the state government and owners of the mills continue to be the prisoners of the old mental framework and could not re-invent jute for purposes other than packaging. No steps have been initiated to modernize the industry or plan for diversification of its products.

This sector is predominantly controlled by the middleman-turned-supplier of raw jute, under the disguise of employer, and is looted and plundered only with an aim to earn super profit within a shortest period. The sector is exploited for accumulating capital and the capital is re-invested into other greener pastures, in turn, leaving the industry in a dry and anemic state. The Ministry of Textiles, in its report, has indicated that the annual turnover of the jute industry is over 10,000 crores of rupees. However, the industry spent only Rs 270 Cr, i.e., a paltry 2.7 percent of its annual turnover, on modernisation and technological upgradation. This is the only organised sector in the state where seven to eight types of wage patterns exist. The state government, despite promising to formulate jute policy and grade and scale, during the last tripartite agreement in 2015, has miserably failed to implement it.

Law of the land is alien to this sector. Whopping PF and gratuity dues are still plaguing the industry. The data placed by the government of West Bengal reveals that the man-days lost due to illegal lockout is 100 per cent and fatal accidents are the highest in the industry. For the first time, National Jute Board carried out a survey and found the average income of workers' household is Rs 11,015 per month. Maximum households (57.4 percent) have reported monthly income between Rs 5,001 to Rs 10,000. Only 6.4 percent have income above Rs 20,000 per month. Indebtedness is a common problem among jute workers. The survey points out 54 percent households are in debt.

Tea and Jute are the only two remaining labour-intensive industries that earn huge revenue annually but criminally neglected for decades together. The industrial relations in this sector is medieval and informal employment still predominates. Engaging workers sans statutory benefits is becoming the norm of the day. In the last assembly elections of West Bengal, the jute workers voted overwhelmingly against BJP all over the state. The jute workers responded to the industrial strike called by the CTUs and have a militant legacy of resistance. Cutting across all political lines, trade unions of various political hues have forged a broad unity and this is the strength of the jute workers movement in the state. Stormy days are ahead, and the united trade union movement has many a challenge to confront in the days ahead.