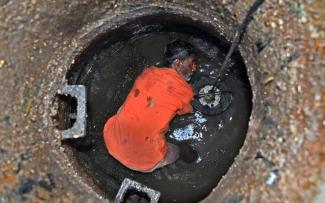 Passing a detailed order in a public interest litigation filed by the All India Central Council of Trade Unions (AICCTU) before the High Court (HC) of Karnataka in respect of immediate cessation of the inhuman practice of manual scavenging, the Court stated – “It is made clear that, henceforth, there will be no more manual scavenging in the State of Karnataka ignoring the statutory provisions of the Act of 2013 and Rules of 2013. Meaning thereby, the scavenging shall be done only with aid and assistance of the equipments which are mentioned under the Rules framed under the Act of 2013”. Further, The HC cast the responsibility on District Magistrates to create awareness amongst all officer of local bodies to ensure compliance of statutory provisions as contained under the Act of 2013 and the Rules of 2013 and held that in case of non-compliance of the statutory provisions under the Act of 2013 and Rules of 2013, the District Magistrate shall be held for contempt proceedings as the District Magistrate was the authority who has been made responsible under the Act of 2013 for rehabilitation of such manual scavengers. The Court also directed that apart from payment of compensation of Rs. 10 lakh to workers who had died in Kalaburagi and Ramanagara in 2021, their families had to be rehabilitated under Section 13 of the 2013, Act.

Further, on September 17th, 2021, the Bombay High Court directed the Maharashtra Government to disburse compensation to the families of Sri. Govind Sangaram Chorotiya, Sri. Santosh Kalsekar and Sri. Vishwajit Debnath, who all died cleaning a septic tank in December 2019. Seeking compensation and rehabilitation under the Prohibition of Employment as Manual Scavengers and Their Rehabilitation Act of 2013, the wives of the three Dalit workers had petitioned the Bombay High Court, which directed the State Government to pay the compensation within four weeks and to submit an elaborate rehabilitation plan for the families. The Court further directed the State Government to empower and make local governments responsible to ensure compliance with the legal provisions.

‘Right to sit’ for Workers in Tamil Nadu

The Tamil Nadu government tabled a bill in their legislative assembly to make it mandatory for all establishments to provide seating facilities for its employees, and the same was passed unanimously on 13.09.2021. This will benefit and bring relief to thousands of workers who are employed in the service sector, including those in shops, showrooms, housekeeping, security, among others. Thousands of workers are put through this inhuman situation who end up suffering from severe health impacts due to the inability to sit during their working hours.

This Bill seeks to amend the Tamil Nadu Shops and Establishments Act, 1947 by proposing to add sub-section 22A which reads - “The premises of every establishment shall have suitable seating arrangements for all employees so that they may take advantage of any opportunity to sit which may occur in the course of their work and thereby avoid ‘on their toes’ situation throughout the working hours.”

This issue was discussed during the State Labour Advisory Board in September 2019 and received unanimous approval from all its members. However, the same came to be tabled in the form a Bill after two years, hence before the legislative assembly. Tamil Nadu is the second State, after Kerala, that has raised the basic ‘right to sit’ concern of workers.

Dismissing a writ appeal filed by Tata Coffee Limited, the Karnataka High Court held that as per Supreme Court’s judgment in Jaipur Zilla Sahakari Bhoomi Vikas Bank Ltd. v. Ram Gopal Sharma [AIR 2002 SC 643], the Appellant failed to establish that they had made the payment of one-month salary in compliance of Section 33(2)(b) of the Industrial Disputes Act, 1947 when an application was made before the trial court to obtain approval to dismiss the Respondent Workman. Throughout the trial, the Appellant had not produced any document or acknowledgment whatsoever to show the mandatory compliance with the provision. The Appellant had only made claims that they had sent a payment of one-month salary via money order. There was no reference made in regard to whether the workman was served a copy of his dismissal order either. Therefore, the High Court upheld the order of the Industrial Tribunal which had ordered reinstatement of the workman.

Penalty for Not Maintaining Records Under Minimum Wages Act

The Labour Enforcement Officer found some discrepancies in compliance with the Minimum Wages Act during his inspection of an ATM which was being maintained by the Applicant who had entered into an agreement with State Bank of India, who then served a notice on the Applicant to remove the discrepancies. The Applicant responded to this notice stating that he is not liable to maintain the register or records with regard to minimum wages or to display the notices as he is a petty contractor. Dissatisfied with the response, the Labour Enforcement Officer filed a criminal complaint against the Applicant under Section 22A of the Minimum Wages Act, 1948, which the Applicant sought to be quashed before the Madhya Pradesh High Court. The High Court then dismissed the petition stating that even if he is a petty contractor, he cannot escape liability under the Minimum Wages Act.

Employee Can Challenge T&C of Employment

In a batch of appeals filed by Associate Professors and Assistant Professors, who had work experience of 15 to 17 years and were substantively appointed after going through the process of selection provided under the Uttar Pradesh State Universities Act, 1973, the Supreme Court of India held that the professors shall be treated as substantively appointed teachers and members of service for all practical purposes and are entitled to pay-scale and consequential benefits on par with regular professors. The bench also stated that as the bargaining power vests with the employer and the employee is left with no option, but to accept the terms and conditions dictated by the management, it is open for the employee to challenge the conditions if it violates the statutory requirement and can raise questions when they are aggrieved.

These professors of HNB Garhwal University were substantively appointed on contract basis despite going through a process of selection as per the Act and had challenged the arbitrary conditions of the letter of appointment restricting it to be on contract basis for three years which is in contravention to the Act.

The court said that since these teachers have gone through the process of selection provided under the scheme of the Act regardless of the fact whether the post is temporary or permanent in nature, at least their appointment is substantive in character and could be made permanent as and when the post is permanently sanctioned by the competent authority.

Software Engineers fall under the definition of workman under Section 2(s) of the Industrial Disputes Act, 1947

In the context of deduction under Section 80JJ(AA) of Income Tax Act, the Karnataka High Court was faced with the question as to whether the employees in software industry are covered by the definition of 'Workman' in Explanation (iii) to section 80JJAA of the Act read with section 2(s) of the Industrial Dispute Act.

The Court while referring to the order of the Supreme Court in Devinder Singh v. Municipal Council, Sanaur [Civil Appeal No.3190/2011 dt. 11.04.2011 before Supreme Court] held that under Section 2(s) of the ID Act, the definition of a workman is very wide inasmuch as the said definition would cover any person who has the technical knowledge, self-skilled in an industry.

It held that the software engineer was a skilled person, a technical person who is engaged by the employer for hire or reward, and hence would also come within the purview and ambit of workman under Section 2(s) of the ID Act so long as such a person does not take a supervisory role.

The Court also held that the concept of the workman has undergone a drastic change and was no longer restricted to a blue collared person but even extends to white-collared person. It held that while a couple of decades ago, an industry would have meant only a factory, but today industry includes software and hardware industry, popularly known as the Information technology industry.