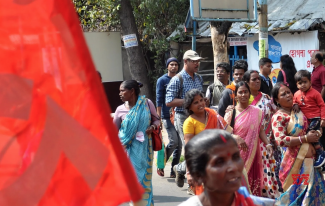 Amidst threats, intimidation and contempt the mid-day meal workers participated in the protests across the state of West Bengal. Since last August, they submitted petitions in different blocks of the state. At the protest held in Kolkata on 7th-8th July, the mid-day meal workers highlighted that both the central and state governments are following a policy of neglect towards the education of the poor. While the entire programme is facing serious crisis, the central government is curtailing the budgetary allocation. This will have a telling effect on the programme. In effect, the Right to Education Act, 2009, is violated by the state itself. School dropouts have increased in post-Covid scenario. Child marriages are increasing day by day. The West Bengal government has failed to protect the welfare of mid-day meal workers. Although the state government says there is lack of funds, it has sanctioned huge sum to clubs and Durga Puja committees this festival season. And when it comes to paying ex-gratia to the workers, the Mamata government has sternly refused.

West Bengal is the only state in the country where the workers have been working for paltry sum for past ten years sans any increment even after putting in twenty years of service. The allowances are not paid regularly. Threats of retrenchment, lack of dignity and job insecurity are looming large.

Nearly 2.5 lakh workers of the state joined the agitation. The West Bengal Randhan Karmi (Mid-day meal) Union organised demonstrations and submitted memorandum to the State Labour Department and District Labour Department. The workers joined the protest in Polba-Dadpur, Pandua of Hoogly district with main demands of issuing identity cards for the cooks, grants during festivals, increment in allowance, payment of allowance through bank account, formation of welfare board for cooks under the initiative of the labour department.

A memorandum was given by Bagnan of Howrah District. Calcutta district workers presented their demands to the chairman of the District Primary School Sansad. The workers of Haringhata, Nadia district will give memorandum in general meeting. The MDM workers from Habra-1, Habra-2, Deganga, Barasat-2, and Gaighata of North 24 Parganas district joined the protests in groups at the blocks throughout the month of September. On 13 September 2022, AICCTU took the initiative to issue a mass memorandum to North 24 Parganas Joint District Labour Commissioner. The Commissioner agreed to the demands in principle and assured to forward it to appropriate authority. Despite the inclement weather, the workers from far and wide gathered at the blocks. This resoluteness and militant mood of rural-urban marginal workers will keep the movement alive.

At the end of the autumn festival, the union has planned for a massive statewide protest. This struggle is on the hike in allowance and recognition as a worker. This is to safeguard the future of the workers as well as to save the education of the poor. Therefore, the leaders will strive to build and combine this struggle with other workers of the state.