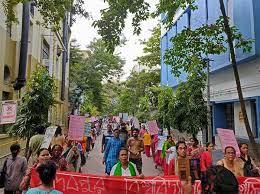 After a yearlong struggle contractual workers of Jadavpur University secured their primary demands regarding better wages, regular EPF/ ESI, bonus, paid sick leave and other work-related issues. At a time when the inflation is skyrocketing, the workers were receiving wages which was inadequate for sustenance and much lesser than the accepted wage rates in state government aided institutions.

Aggravating it further, the third party contractors were not depositing EPF/ESI at the end of the month and some even refused to pay EPF/ESI and bonus while the university authority had paid them as per the rules. When the second wave of Covid became worse, the agencies forced the workers to work extra hours on a lower wage rate and if they refused to comply, they were immediately terminated. Even in hostile conditions, they worked in silence until cases of assault started in the university.

Particularly, the security guards working in the night shift were frequently assaulted either by strangers or by the goons of dominant political party. The maintenance staffs regularly worked extra hours and were not paid for it. They worked seven days a week but were unpaid if they fell ill for a day or two. Their appeals for justice went unheard for a long time. These abysmal conditions were the prime factors that led the workers to initiate a sustained and organized movement against the authority’s undemocratic actions that systematically alienated them in the workplace.

Series of rallies and protest demonstrations were held in front of the administrative building since January. They continued their protests despite repetitive threats from administration and the ruling party led unions. Several attempts were made to weaken the movement, but the workers continued to march forward by defying every obstacle.

It took the authority four months to address the workers and a committee was formed to resolve the issues immediately. After a series of meetings and negotiations, the university finally released a circular on 30 August regarding the initiation of necessary procedures that will ensure revised wage rate along with other benefits by adhering to the latest government order. Instructions have been given to release uniform guideline that will protect the rights of the workers.

In the recent times, we are witnessing rapid contractualisation of government jobs. As the new labour codes have already been passed, it has given the authorities and the contractors a chance to try out new forms of exploitation that were unforeseen. Not only in Jadavpur University, even in Calcutta University or Presidency, Viswa Bharati or JNU - workers are fighting against the draconian laws and wage inequality everywhere. It would not be an overstatement to say that these protests indicate the beginning of a new phase of working class movement in government education sector.

The movement in JU was primarily centered around economic demands but gradually it has brought forth the real picture of undemocratic work environment prevailing in the campus as a whole. The workers managed to gather unprecedented support from the student community as well as scholars. As they began participating in rallies along with the workers and raised slogans against corruption, against curbing of democratic rights and for social security - it was immediately transformed into a movement that fought for a democratic campus where everyone’s economic, political and social rights were secured.