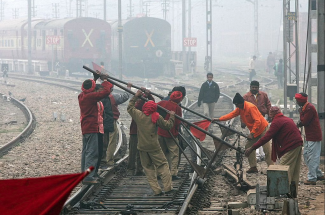 “What about those who are employed? Constitutional Lawyers assume that the enactment of Fundamental Rights is enough to safeguard their liberty and that nothing more is called for. They argue that where the State refrains from intervention in private affairs—economic and social—the residue is liberty. What is necessary is to make the residue as large as possible and State intervention as small as possible. It is true that where the State refrains from intervention what remains is liberty. But this does not dispel the matter. One more question remains to be answered. To whom and for whom is this liberty? Obviously, this liberty is a liberty to the landlords to increase rents, for capitalists to increase hours of work and reduce rate of wages. This must be so. It cannot be otherwise. For in an economic system employing armies of workers, producing goods en masse at regular intervals someone must make rules so that workers will work and the wheels of industry run on. If the State does not do it, the private employer will. Life otherwise will become impossible. In other words what is called liberty from the control of the State is another name for the dictatorship of the private employer.”

During the early period of industrialization, the industrial establishments faced problems of labour recruitment on account of lack of labour mobility, caste and religious taboo, language, etc.. Unable to solve these problems led employers to depend on middlemen who helped them in recruitment and control of labour. These middlemen or contractors were known by different names in various parts of the country.

Contract Labourers were considered as exploited section of the working class mainly due to lack of organisation on their part. Due to this, the Whitley Commission (1860) recommended the abolition of contract labour by implication. Other Committees were:

“We now come to the question whether the tribunal was justified in giving the direction for the abolition of the contract system in the manner in which it has done so. In dealing with this question it may be relevant to bear in mind that industrial adjudication generally does not encourage the employment of contract labour in modern times…”

The Supreme Court of India observed that contract labour should not be employed where:

In the Second Five Year Plan, the Planning Commission stressed the need of improvement in the working conditions of contract labour and thus, recommended for a special treatment to the contract labour so as to ensure them continuous employment where it was not possible to abolish such type of labour.

It was discussed at various meetings of Tripartite Committees at which the State Governments were also represented and the general consensus of opinion was that the system of contract should be abolished wherever possible and practicable and that in case where this system could not be abolished altogether, the working conditions of contract labour should be regulated so as to ensure payment of wages and provision of essential amenities.

Based on these views “The Contract Labour (Regulation and Abolition) Act, 1970” was passed by both the Houses of Parliament and received the assent of the President on 5th September, 1970 and it came into force from 10th February, 1971.

The Supreme Court, in AIR India Statutory Corporation Vs United Labour Union and Others [1997 LLR 305 (SC)] ruled that by "necessary implication" the Principal Employer will be under statutory obligation to absorb the Contract Labour on abolition of the Contract Labour system.

This was overturned in SAIL Vs National Union Water Front Workers and others (2001 LAB. I.C. 3656] decided by the constitution bench of the Supreme Court. The Court ruled that in section 10 of the CLRA act there is no implicit requirement of automatic absorption of Contract Labour by the Principal Employer in the concerned establishment on issuance of notification by the appropriate Government under section 10(1) prohibiting employment of Contract Labour in a given establishment. However, the Court observed in case a contract between the Principal Employer and the Contractor is found to be not genuine but a mere camouflage, the so-called Contract Labour will have to be treated as employees of the Principal Employer and shall be directed by the industrial adjudicator to regularize the services of the Contract Labour in the concerned establishment. However, such cases will be dealt under the Industrial Disputes Act and not under the CLRA.

In Hindustan Steelworks Construction Ltd. v. Commissioner of Labour [(1996) 10 SCC 599] the Supreme Court held that there was no provision under those rules which made the principal employer liable for payment if the contractor contravened that condition.

The casual approach of exploitation of the contract labour is something unbelievable. Rarely does a case of this nature reach the apex court for adjudication. Since it had reached it, the court should have seized the opportunity to do justice and should not have so easily let the principal employer off the hook. The reason behind the enactment of the contract labour Act was to regulate conditions of these vulnerable section of workers by regulating their working conditions with a view to progressively eliminating the system altogether.

After the SAIL judgment, another decision which the proverbial final nail in the coffin of contract labour was the Uma Devi case of 2006. In this judgment, the Supreme Court held that regularisation of services of daily-wage workers amounted to back-door entry and hence was prohibited by the Constitution. Thus, as a consequence of this judgment, establishments continued to employ daily-wage employees free from the fear of being compelled to regularise them. In fact, in Uma Devi case, the Supreme Court effectively prohibited the High Courts and Supreme Court from directing the regularisation of such workers. This judgment also served as a weapon in the hands of the employers to deny any claims of regularisation by contract workers as well.

“19. The provisions of Industrial Disputes Act and the powers of the Industrial and Labour Courts provided therein were not at all under consideration in Umadevi's case. The issue pertaining to unfair labour practice was neither the subject matter for decision nor was it decided in Umadevi's case."

In Oil and Natural Gas Corporation v. Krishan Gopal, 2020 SCC OnLine SC 150, decided on 07.02.2020]: The bench of Dr. DY Chandrachud and Ajay Rastogi, has called for the reconsideration of the abovementioned division bench verdict in Oil and Natural Gas Corporation Limited v Petroleum Coal Labour Union,  and has, hence, referred the matter to a larger bench, on, inter alia, the following question:

“The limitations, if any, on the power of the Labour and Industrial Courts to order regularisation in the absence of sanctioned posts. The decision in PCLU would, in our view, require reconsideration in view of the above decisions of this Court and for the reasons which we have noted above.”

It remains to be seen which way the Supreme Court decides this reference.

The Supreme Court has repeatedly held that the system of contract labour is nothing but an improved form of bonded labour[2] and that it is nothing but a new technique of subterfuge adopted by employers in recent years in order to deny the rights of the workmen under various labour statutes.[3] It is necessary that immediate steps be taken to  enact law on lines of the Assam Industrial Establishments (Conferment of Permanent Status to Workmen) Act, 1985 conferring permanent status to workmen who have been in continuous service, whether daily wage employees, contract or casual for a period of 180 days in a period of 12 months.