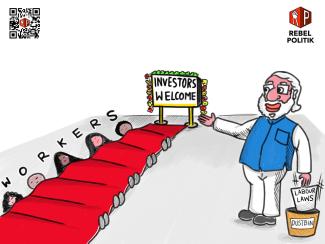 As the Modi government prepares to implement new labour codes which undermine rights of the working class, it is simultaneously trying to portray itself as the emancipator of workers. In his inaugural address to the National Labour Conference, Prime Minister Modi argued that the new labour codes are designed to deliver workers from “slavery” of the past. According to him, the Centre has taken initiatives to abolish laws dating back to "the period of slavery". These laws, he argued, reflect slavery mentality and therefore needed to be amended. He added further, "the country is now changing, reforming and simplifying such labour laws...which will ensure empowerment of workers through minimum wages, job security, social security and health security".

While the Prime Minister was busy propagating these goebbelsian lies, a report of International Labour Organisation (ILO) titled 'Wage and Minimum Wage in the time of COVID-19' tells us what is really happening on the ground. According to this report, informal workers in India suffered a 22.6 per cent fall in wages, even as formal sector employees had their salary cut by 3.6 per cent on an average during the pandemic. This report also mentioned that the real wage growth in India was one of the lowest in the Asia Pacific, lower than even Pakistan, Sri Lanka and Vietnam.

In purchasing power parity (PPP) terms, India's average monthly gross wage of $215 was third from the bottom amongst the 30 countries that are part of the Asia Pacific region in 2019, placed just above Bangladesh and the Solomon Islands. The ILO report states that India's wage grew by a paltry 2.8 per cent in 2015, 2.6 per cent in 2016, and 2.5 per cent in 2017 – a gradual fall in two successive years, while it remained flat in 2018. One should note here that the ILO did not put out a number for rate of wage growth for 2019 in India. The ILO report further stated that following years of poor inflation adjusted wage growth, India is experiencing a net negative rate of wage growth, as wages fell further in 2020. This, the report points out, will surely impact the process of economic recovery and poverty alleviation efforts in the post-Covid era.

Even when compared to its immediate neighbours such as Pakistan, Sri Lanka, China and Nepal, India’s performance in terms of real wage growth was poor. Arup Mitra, Professor of Economics at the Institute of Economic growth, New Delhi pointed out, "the ILO report [considers] the first few months of the lockdown and if it takes the past eight months [into consideration], then the fall of the formal sector salary will be much more than 3.6 per cent”. Therefore, Mitra argues that the ILO figures, alarming as they are, are actually a gross undervaluation because millions of jobs were lost and those who did not lose jobs had to face pay cuts. The crisis of real wage growth was silently pushed under the carpet by the powers-that-be to aggressively push for pro-corporate labour reforms.

Even as the real wages of Indian workers are falling, the collective profit of listed companies at the Bombay Stock Exchange (BSE) in 2021-22 soared to 9.3 lakh crores, which is an increase of more than 70 per cent over the previous year and nearly three times more than the average profit earned every year for a decade before the pandemic (between 2010-11 and 2019-20). During the first year of the pandemic (2020-21), the profit of these listed companies had touched a record 5.5 lakh crores, more than double the preceding year. But the profits that accumulated during the second wave of pandemic have surpassed all previous records.

There are a couple of factors behind this exponential rise in profit. According to CMIE, "raw material costs shot up by 40.1 per cent YoY; power and fuel costs were up even higher by 47 per cent, and purchase of goods was up by 30 per cent". Though the operating costs of the companies increased, this did not keep pace with the wage and salary bills. During the pandemic, vast numbers of workers were retrenched and not all were re-inducted. Newer employments are low paid and the number of contractual, informal workers increased substantially. With far less workers and increased workload, the productivity has increased. Tax cuts and other concessions showered on the big corporate houses have further given a fillip to corporate profits. On the other hand, Rs 10.72 lakh crores of NPAs have been written off by public sector banks and out of this, Rs 2.03 lakh crores was written off during the first wave of pandemic.

In his speech to the National Labour Conference, Modi argued that a work from home ecosystem and flexible work hours and systems like flexible workplaces should be considered as opportunities for increasing the participation of women in the labour market. What, however, is the ground reality that Modi tries to conceal? According to data compiled by the World Bank, the proportion of working women in India dropped from 26 per cent to 19 per cent between 2010 and 2020. In India, the female labour force participation fell so steeply that India is now in the same league as war-torn Yemen. Though women in India represent 48 per cent of the population, they contribute only around 17 per cent of the GDP, compared to 40 per cent in China. The Global Gender Gap Index for 2022 was released by the World Economic Forum on 24 August this year, and it ranks India at 135 out of 146 countries. In 2021, India was ranked 140 out of 156 countries.

Clearly, despite what Prime Minister Modi tries to propagate, the ‘Amrit Kaal’ he talks about, is marked by stark inequality and poverty faced by millions of Indians. The Indian economy is heading towards an abyss, even as all democratic institutions have lost their relevance.