Pushbacks against Capital: Corbynism and its Lessons for Us 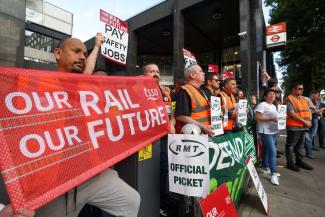 The British Railways have been witnessing a series of strikes this year over long-running dispute on pay, jobs, and conditions. There was one on 27 July. Strikes have again been planned for 15 and 17 September.  More than 40,000 union members will strike, the Rail, Maritime and Transport union (RMT) has said, warning it will “effectively shut down” the entire rail network.

Notwithstanding the crushing of the historic strikes of the 1970s and 80s, working class militancy never died in Britain. However, over the last five years, such militancy has found a powerful ally in a new frame of political thinking, broadly termed as Corbynism.

Corbynism emerged in the wake of the economic crisis of 2008 in whose aftermath both the Conservative Party and the Blairite Labour Party adopted pro-capital stances. Powerful autonomous grassroots movements emerged as a result of peoples’ sufferings and these found allies within the Leftist section of the Labour Party, most notably in Jeremy Corbyn. Corbyn eventually won the leadership contest within the party in 2015, due to his socialist proposals and brought the idea of a new economic order into mainstream of British political discourse even without such proposals.

Through various back and forth developments, including Labour’s stunning election defeat in 2019, Corbynism has managed to retain a substantial amount of space in British politics and society. Even though the post-2019 leadership change in the Labour Party has temporarily subdued the socialist bent, the party continues to be a site of sharp ideological struggle. So strong is the fear of an immediate socialist reassertion within the Labour Party that recently Sam Terry, a Labour frontbencher, was removed from his position in the frontbench merely for appearing in a picket line during the railway strikes.[1]

In the 2017 elections, Labour presented a blueprint for a completely different society that promised to undo the harm a decade of austerity had unleashed upon the country and to push back the drastic neo-liberal reforms undertaken during the 1980s. The blueprint was largely retained for the 2019 election. Promises like the plan to nationalize fiber broadband and give every home free, high-speed internet access became immensely popular. Renationalizing rail, mail, and utilities were also high on Corbyn’s agenda. Mass investment in the public services that had been decimated by central government funding cuts emerged as a cornerstone of his campaigns.

But there was more: a promise to reverse the anti-trade union laws the Conservatives had passed to prevent workers fighting for better pay and conditions, with the promise to outlaw zero-hour contracts, raise the minimum wage to £10 an hour, and extend maternity and paternity leave. These were broad and far-reaching promises, giving workers the same rights whether they’re self-employed, new to a workplace, or working part-time.

Labour’s promise to institute statutory leave for bereavement and miscarriage was remarkable, with the potential to bolster the emotional well-being of individuals when they are at their most vulnerable. Greater protections for terminally ill people and women experiencing menopause are further examples of the “pragmatic utopianism”. Labour made a hallmark of their policymaking during Corbyn’s era. The Party also sketched out a plan for a Green Industrial Revolution, creating a million jobs in the regions and towns that needed employment the most, aiming to make the economy carbon neutral by 2030. Journalist and author Dawn Foster wrote the following about this environmental policy:

The environmental policy is radical and hugely ambitious, and ushers in the promise that not only can we avert the flooding that blighted the first few weeks of campaigning, but that in doing so Britain can bring back genuinely good jobs to regions that collapsed economically after “Thatcherism on steroids” killed mining, steelworks, and shipbuilding jobs in working-class communities that had the temerity not to vote Conservative.[3]

At a juncture where the Indian left is trying to mount a serious challenge to the communal-corporate regime of the RSS/BJP, one wonders which developments at the global level can supply useful lessons and inspiration. Corbynism is certainly one of the experiments that we must observe carefully. Notwithstanding the electoral defeat of the Corbyn-led Labour Party in 2019, and the subsequent change of leadership in the Labour Party, Corbynism has left a deep imprint on British politics. It may yet end up decisively reshaping British polity and society in the times to come.

An analysis of the nature of Labour’s electoral defeat of 2019 leaves much room for optimism. Daniel Finn points out that despite losing fifty-nine seats overall, Corbyn’s party still comfortably bested the Conservatives with every demographic cohort under the age of forty-five: according to Lord Ashcroft’s exit poll, by 57 to 19 percent among eighteen- to twenty-four-year-olds, by 55 to 23 percent among twenty-five- to thirty-four-year-olds, and by 45 percent to 30 percent among thirty-five- to forty-four-year-olds. Voters old enough to remember when Margaret Thatcher became prime minister in 1979 opted for her party.[4] The strongest rejection of Thatcher’s legacy came from those who had only ever known the world she made – younger voters whose yearning for an egalitarian future remains unfulfilled.

For us, the fact that a socialist agenda can significantly influence mainstream political discourse is heartening. We are living in times when Indian politics and economics are undergoing a deep-seated neo-liberal transformation. So powerful is this transformation that many have started wondering whether “old” demands for improved state-led welfare schemes, universal public systems, workers’ rights, make sense anymore. Corbynism’s rise to prominence after more than two decades of neoliberalism is something which should give us hope.

This achievement is the cumulative result of small-scale, localized social and political struggles.[5] The Corbynism story tells us that small-scale, local struggles are capable of influencing the societal consensus over time, and they do build up to something significant. The forms of organizing which made this possible – as well as the shortcomings which stopped the Labour Party from claiming an electoral victory – needs further study.

In times when questions are being raised about the ideological efficacy of socialism in the fight against fascism in India, a close look at the Corbyn experiment throws up something interesting and important. Its interventions were the product of creative alliances between actors in electoral politics and grassroots movements on the one hand, and a sharp ideological critique of Neoliberalism based on principles rooted in Marxian socialist traditions on the other.