Sanitary workers are most neglected in Odisha 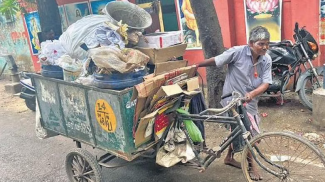 Urban bodies as principal employers must intervene to ensure their wellbeing

Sanitary workers are not like other workers of any occupation but they are also one of the most vulnerable communities among scheduled castes in India. Scavenging or sanitary work is still prevalent as a customarily caste based occupation in India. As per 2011 census the population of Hadi community in Odisha was 2.5 lakh who are largely engaged in sanitary work. They are also called by different local names such as Mehenter, Behera, sweeper and scavengers. With increasing urbanization most of them have migrated to urban locations to get engaged in sanitary work and largely concentrated in cities. In the recent past, the Government of India has identified about 60,000 manual scavengers from 18 States including Odisha. Though legally manual scavenging is banned under the Prohibition of Employment as Manual Scavengers and their Rehabilitation Act 2013, it is still in practice in many places of Odisha.

Both men and women of the community are being engaged in this occupation and the State Government is the largest and principal employer. In a caste ridden society of India, sanitary workers are looked down upon in the caste hierarchy and they are the most socially discriminated community both in rural and urban areas only because of their caste and caste based occupation. They clean toilets, clogged drains by entering manholes, carrying and cleaning, disposing off all kinds of waste, garbage, disposal of dead animals, carcasses, including human excreta. They all start work early in the morning only to keep our houses, all public places, hospitals, schools, stations, bus stops, roads, and cities clean to maintain sanitation for a healthy and clean life. In spite of modernization, this particular community people are routinely engaged in large numbers with this most hated occupation which has no social respect in public life. Some of them also additionally do drum beating, leather work, shoe making and bamboo work. But in spite of all their dedicated service to mankind what they have been getting? What is their socio-economic status?

Almost all of them live in slums for generations without homestead land and even struggle every day to access basic amenities such as safe drinking water, electricity, toilets and a house for the family. Their houses in slums routinely face eviction drives as unauthorized habitations, without a rehabilitation plan. They have been always pushed into the outskirts of the cities and displaced again and again either in the name of expansion or beautification of cities without a permanent solution to their land  and housing rights which must be recognized as basic human rights  to live a life with identity and dignity. The Prohibition of Employment as Manual Scavengers and their Rehabilitation Act 2013 is in place to abolish manual scavenging as a correction of historical injustice and indignity and to establish the right to live with dignity as a fundamental right under the Constitution.

There is a provision in Section 13(1) (c) of the Act for allocation of residential plots and financial assistance for construction of houses or a ready-built house to sanitary workers. As per the rule, there should be a State-level and district-level survey committees under the chairmanship of district Collectors with representatives of community including women, but the Odisha Government has not yet implemented it as nowhere there is such committee.

Their literacy rate is comparatively lower than other social groups. Their children become rag pickers, child labourers and largely dropouts. There has been no major change in their life even with 75 years of intuitional interventions, protective laws, and a host of schemes while we are celebrating Azadi Ki Amrut Mohachab.

Why so? It is because the popular clean drive project of our Prime Minister has not been inclusive of the concerns of sanitary workers?  In almost all urban bodies in Odisha, sanitary work has been slowly getting converted into privatization and contractual appointments and surprisingly no one has been getting minimum wage and even workers with 25 years of experience are not being treated as semi-skilled or skilled workers because sanitary works are not the skillful one. Even many of them get less than minimum wage for eight hours of hard work and no extra wage for overtime. The principal employer has no role to ensure minimum wage of these vulnerable helpless workers and Labour department has monitoring mechanism for these workers.

The kind of work they have been doing is most hazardous as they are more prone to TB, skin diseases and water borne diseases due to long exposure to dust, polluted water, wastes and unhygienic places. It is the duty of the employer to provide all kinds of protective equipment, rest and holidays and sickness leave but this has been undermined and there has been violation of all kinds of Labour laws.

They must have protective equipment such as   masks, gloves, boots, helmets and all kinds of such instruments while on the job. It has been frequently reported that some of them die in roadside manholes, soak pits and waste pits while cleaning. Unfortunately such deaths largely remain unrecorded by urban bodies; there is no data base.

The trade unions, civil society organizations and other such social identity-based bodies have made very little intervention to change the socio-economic condition of the sanitary workers.

As part of national commitment in line with the Constitution of India along with the National Commission for Scheduled Castes (NCSC), there is a special panel since 1993, the National Commission for SafaiKarmacharis (NCSK), and the National SafaiKarmachari Finance and Development Corporation (NSKFDC) since 1997 with a share capital of Rs 700 crore to look into the specific issues of scavenger communities. The NSKFDC has declared schemes for skill development, Swacha UdamiYojana, sanitary marts scheme, construction of pay and use toilet, study loan for students , and rehabilitation programme for self-employment with loan at lower rate of interest and subsidy but it has covered very little.

The Odisha SC and ST Development Finance Cooperative Corporation (OSFDC) is the nodal agency in the State for implementation of such programmes for the Safai Karmacharis. In States like Karnataka, there is also a State commission for Safai Karmacharis under the provision of the State Act to ameliorate their condition. The various public sector and private corporations are also contributing out of their CSR funds to the NSKFDC for rehabilitation work. But it is most unfortunate that the State of Odisha has been neglecting the cause of sanitary workers without any visible effort for correction of continued historical injustice against sanitary workers of the state.