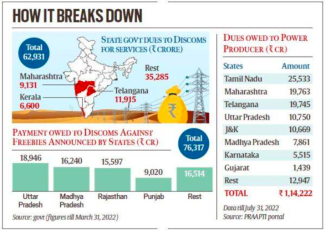 The Union Government is seeking to significantly alter the right of people to electricity through the Electricity (Amendment) Bill 2022, introduced in Lok Sabha on 8 August 2022. The Bill has now been referred to the Energy Standing Committee of the Parliament, and has seen vocal opposition from workers, farmers and political parties in the opposition. While corporations are welcoming the move, the provisions clearly reveal that the Bill, if enacted, will be a heavy blow to people’s right to electricity.

Electricity as a Fundamental Right

At the outset, it must be kept in mind that various courts across the country, including the High Courts of Kerala, Madras, Himachal Pradesh, Delhi, Orissa and Gujarat have all held that people of India have a fundamental right to electricity as a facet of the right to life under Article 21 of the Constitution. Of course, it has long been settled that the right to life is more than a right to animal existence - it is a right to a dignified life. Electricity, then, has been given the status of a necessity required to ensure the dignity of the individual. The Courts have acknowledged and recognised the relationship between power supply and development. In fact, the Madras High Court in Judgement dated 27.09.2013 in W.P. No.17608 of 2013, [T.M.Prakash and Others v. The District Collector and Anr.] held as follows:

68… Electricity supply is an essential and important factor for achieving socio-economic rights, to achieve the constitutional goals with sustainable development and reduction of poverty, which encompasses lower standards of living, affects education, health, sanitation and many aspects of life. Food, shelter and clothing alone may be sufficient to have a living. But it should be a meaningful purpose. Lack of electricity denies a person to have equal opportunities in the matter of education and consequently, suitable employment, health, sanitation and other socio-economic rights. Without providing the same, the constitutional goals, like Justice, Liberty, Equality and Fraternity cannot be achieved.”

Of course, the symbiotic relationship between electricity and development is well documented. Moreover, the fact remains that the vastly unequal society in India has resulted in a situation where 35.2 per cent of the Indian population was living in slums in the year 2018. Since the COVID pandemic, economic insecurity and inequality has only increased. This population is largely made up of workers in the unorganised sector - who fall beyond the ambit of labour legislation. It is through this lens then, that the proposed Amendments to the Electricity Act must be considered.

Multiple DISCOMS in a single area.

The most drastic change sought to be brought in is to allow multiple private players to attain licences to distribute electricity in a single area, using the existing distribution network. Effectively, this will allow consumers to choose between electricity Distribution Companies [Discoms], just like a choice between Airtel and Vodafone in the telecom sector. The Stated objectives of this change is “the need to provide choice to consumers in order to promote competition”. This is an explicit materialisation of free market ideology, which has been creeping in from the 90s, and was formalised in the 2003 Electricity Act. Now, an entitlement to a fundamental right is left to be determined by market forces!

Not only this, but such a move is directly contrary to state interest and plays into the hands of corporations. Profit motivated private players would have no reason to participate in the welfare aspects of electricity distribution, and would pounce on the commercial, profitable areas. On the other hand, the state discoms would be left with loss-making areas. Hence, the profitable areas are being freely given away for the taking and the state is left to bear the losses. This is totally senseless - but has numerous parallels in various actions of the State, including privatisation of PSUs - and is reflective of the deep commitment of the state to its crony corporate regime at the expense of the people.

Cross-subsidisation refers to the practice of imposing higher tariffs on one set of consumers in order to offer subsidised rates to another. The Bill makes an attempt to regulate such practices through the creation of a “cross subsidy balancing fund”. This fund is to be set up by state governments in supply areas with more than one distributor. Distributors will be required to deposit any surplus generated from cross-subsidisation activities into this fund, allowing Government entities to decide where to utilise these funds. This fund could be used to direct resources to areas that the private players empowered by this Bill may not be incentivised to serve. However, the practical utility of this mechanism to provide equitable access is questionable. The way this fund is utilised can further entrench the position of private players empowered by this Bill — a similar Universal Service Obligation Fund in the telecom sector was used to award contracts to private players like Airtel and Jio, sidelining the state-run BSNL.

No dispatch of electricity unless payment

The Bill also proposes that no electricity shall be scheduled or despatched unless adequate security of payment, as may be prescribed by the Union Government, has been made. There is no involvement of the State in deciding the adequacy of the prescribed security. Loss-making state discoms may not receive dispatch of electricity if they are unable to pay. And as discussed above, the state discoms will continue to perform welfare functions and cover subsidised areas. Effectively, such a provision could result in electricity for the subsidized areas being cut off, in violation of the fundamental rights of the impoverished.

A proposed clause that will have grave implications is the proviso that the failure of the commission to grant/ reject the application for licence within the time period will result in the applicant being deemed to have been granted the licence. The benefit of State inertia is therefore with private licencees, who may not even be qualified or suitable to be considered.

‘Electricity’ is an item that falls within the Concurrent list of the Seventh Schedule of the Constitution. Therefore, the State and the Union may both legislate on the issue. At present, each State has separate Grid Code and Grid commission regulations, compliant with the union Electricity Act.

Several proposals for amendment now seek to firmly establish the primacy of the Union Government. For example, applicants who seek to distribute electricity in more than one state would now be granted licence by the Central Electricity Regulatory Commission, whereas this is purely determined by the State as on date. There are also no provisions regulating any consultation / prior permission or any other mode of involvement of the State.

The Bill also proposes to remove all imprisonment penalties, while increasing fines. The Statement of Objection says that the proposal is to “decriminalise the offence by removing imprisonment provisions for ensuring ease of doing business.” A private corporation will be able to get off with payment of a fine for violations.

Hence, profit-motivated companies may even find it profitable to violate the law and pay the penalty amount as and when the same is ordered or even compound the offence for a few thousand rupees.

The entirety of the Electricity distribution system is heavily indebted. On one hand, States grant subsidies to households / categories of workers but fail to ensure the payment of due amount to the DISCOMS. The DISCOMS fail to make payments to the electricity supplier.

The Bill has been introduced at a time when the supreme court is taking up issues pertaining to provision of ‘freebies’ by States for election purposes. However, the provision of electricity at a subsidised rate or for free can never be viewed as a freebie, and is an effectualisation of the positive obligation of the State towards the fundamental rights of the individual. It cannot be gainsaid though that promises of free electricity are used as electoral tactics and there are often lapses in the due follow up, which is the allocation and payment of requisite funds to the discoms. For example, it has been reported that the BJP government in Uttar Pradesh made a pre-poll promise of halving electricity bills of farmers, and grant of free electricity for tubewells of farmers. Now, the UP DISCOM has sought Rs 2,250 crore from the government, including Rs 250 crore towards implementation of the pre-poll announcement.

The loss-making DISCOMs will now be under further pressure, and may not be able to give adequate security, leading to subsidies being eventually dropped.

The bill spells a doom to free electricity to the poor and the downtrodden in the long run. The days are not far off when subsidised electricity for agriculture is withdrawn and thus can have a greater impact on the agriculture and the farmers.

One of the demands of the farmers’ movement was the scrapping of the Electricity Bill. The Union Government had written to the Samyukta Kisan Morcha on 9/12/2021 that the Bill would be placed before Parliament only after the discussion with the Morcha. This was one of the bases for withdrawal of protests. The introduction of the Bill in the Lok Sabha is a betrayal of the promises of the Union Government, and will have grave implications for not only farmers but workers and the poor across the country. Workers must take up the cause and launch a joint struggle with farmers, Dalit and women’s organisations to ensure that the Bill is never enacted.