Being Domestic Workers  in India: No Rights in the Face of Triple Oppression of Class, Caste and Gender 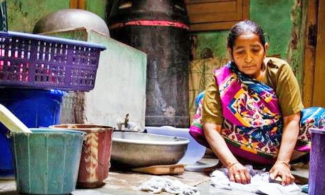 Domestic work, the labour that goes into running a house, has been probably the most unrecognised labour all over the world, throughout the history. Undermining the human hour invested in reproducing labour that generates the so called ‘value’ in the economy has been the most important tool of exploitation and bondage of women. Unfortunately, employing workers from outside the household for domestic work has not solved the problem of crass exploitation, rather it has added dimensions of class and caste based oppression to it. Employed in the `private sphere’ of the household, the domestic workers remain an invisible workforce standing outside of almost all forms of protection and are subject to the triple oppression of caste, class and gender.

The estimated number of domestic workers in India ranges from 4 million to 50 million according to available sources. Over two thirds of this are women. A vast majority of this number are Dalits. Increasing migration away from rural areas has resulted in a growing number of Adivasi women joining this work force.

Domestic workers are subject to discriminatory, feudal and casteist practices that have persisted over time. These include, but are not limited to, the provision of separate plates and tumblers, prohibition of entry into the Puja room, denial of access to toilets, denial of seating facilities and many more forms of humiliation. Caste plays its own role in worsening the situation for domestic workers coming from oppressed background. It is not uncommon to find a Dalit domestic worker being employed to clean the house, while a person belonging to the same community of the employer being employed as a cook. Several apartment complexes and gated communities have introduced rules that prohibit domestic workers from using the common lifts and common areas. The structures of caste hierarchy blended comfortably with capitalism when Kent RO issued an advertisement saying – “Are you allowing your maid to knead atta dough with her hands? Her hands may be infected”.

These practices are nothing but forms of untouchability and are, in fact, offences under the Prevention of Atrocities (Scheduled Caste and Scheduled Tribes) Act 1989, but are continuing in almost every household till this day.

The all-encompassing practice of calling domestic workers as ‘servants’ is a part of the mechanism to deny them of their rights as working class. The most basic rights such as minimum wages, weekly off and 8-hour work days are denied to them. A few state governments have notified minimum wages for domestic workers but they remain unenforced. Compelled by extreme poverty to work for less than minimum wages, domestic workers are actually working under conditions of forced labour. They are not entitled to weekly off or annual leave and any holiday taken by them is subject to deduction from their wages. They are not paid any bonus, and, instead, are offered the old clothes of the employer. The poor wages and consequent economic necessity compel workers to engage in inhuman level of over work by serving as many as 3-5 households a day.

Domestic workers perform their work in isolation without any presence of any colleagues and in the consequent vulnerable working conditions, they face a grave risk of sexual harassment. They are notionally covered under the Sexual Harassment of Women At Workplaces (Prevention, Prohibition And Redressal) Act, 2013 but the local committee to which they are required to complain, is not set up in most places, rendering the law effectively meaningless. The lack of job security also places these workers in an extremely vulnerable position and makes it extremely difficult for them to even complain against the violation of their basic rights.

Rural poverty and the consequent migration to urban areas has resulted in women from rural India, especially Adivasi women, being brought to cities to work as domestic workers through various “placement agencies”. They work as live-in workers, effectively working 24 hours a day 7 days a week. They are not provided proper food or housing facilities and are forced to remain within the confines of the place of work with no access to the outside world. The “placement agencies” are most often unregistered unregulated bodies. In several cases, these agencies require that the wages be paid to the agency and not to the worker - effectively rendering the worker a slave.

Outside the protection of the law

As mentioned earlier just a few states notified minimum wages but these remain unenforced. Domestic workers essentially stand outside the protection of the law as there are no legislation dealing with their rights – there are no laws to regulate working hours, leave and other rights that are routinely enjoyed by other workers.

The International Labour Organisation (ILO) Convention C189 - Domestic Workers Convention, 2011, recognizes that the domestic work is undervalued, invisible and particularly vulnerable to discrimination in respect of conditions of employment and of work, and to other abuses of human rights and provides for minimum conditions to ensure decent work for domestic workers. India has signed the convention but has not ratified it yet - despite several demands.

Domestic workers have faced the brunt of the COVID-19 pandemic and the lockdown. A survey by the Domestic Workers Sector Skill Council – which is under the Ministry of Skill Development and Entrepreneurship - reports that nearly 85% of domestic workers have not been paid for the lockdown period. Several workers have lost their jobs and several of them have been asked not to come stating that they would spread the corona virus.

The Standing Committee on Labour on the Impact of COVID-19 on rising unemployment and loss of jobs/livelihoods in organized and unorganized sector has found that the informal workers most hit by the Covid-19 pandemic include domestic workers. It finds that they have been under extreme distress due to low levels of income and savings, lack of employment security and access to government social protection. It also notes that the consequential effects of this would cause irreparable damage and that social security measures need to be strengthened and the Government should explore ways and means to put money in the bank accounts during adverse conditions like Covid-19.

The need of the hour is for domestic workers to organize to fight collectively against the structures that oppress them  be  it class, caste or patriarchy. π