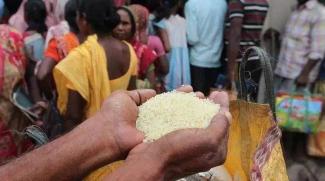 With unemployment and underemployment touching record levels and food inflation on the rise amidst the Covid Pandemic and lockdowns from March 2020, it is common knowledge that food security in India (which is placed at the 94th position out of 107 countries in the recent Global Hunger Index, GHI) has taken a further dip. This is happening at a time when the BJP government is forcibly implementing three Farm Bills which will further put India’s food security in jeopardy by pushing even procurement and distribution of food grains completely in the ‘market’ domain. Public procurement of food grains through the APMC Mandis and MSP mechanism lies at the heart of all attempts to ensure food security in India. The Modi government is now seeking to dismantle this. Ironically, the same government is depending on the APMC and MSP-based procurement to make tall claims while addressing food security during the pandemic; i.e. distribution of additional 5 Kg wheat and rice per person per month under the National Food Security (NFS) scheme after the lockdown in March 2020 and in April and May 2021. We will attempt to analyse the food security situation in India and the claims made by the government.

In the period immediately following the lockdown in March 2020, the government used its buffer stock of food grains amounting to 58.4 million tons and pulses 3 million tons (obtained through the traditional APMC Mandis) to provide an additional 5 Kg per person/month to 80 Crore beneficiaries (as per government claims) under the Prime Minister Garib Kalyan Yojna (PMGKY). These claims however should not be taken in face value. As per the figures put out by the government for the month of August 2020, the distribution of food grains under PMGKY is shown as 28,07,699.31 MT. If the number of beneficiaries was indeed 80 Crore, the food grains distribution per person/per month comes to only 3.5 Kg. And if the total food grain distribution quantity is accepted, and if it is assumed that each beneficiary received 5 Kg per person/month, then number of beneficiaries can only be 56.15 Crore. The story has not changed much this year too. If one looks at data for July 2021, either the food grain distribution per person/per month was only 4.27 Kg or the number of beneficiaries was only 68.36 Crore. In either case, it is clear that one cannot depend on all claims made by the government.

The horrific fact that migrant workers faced last year was one of the starkest indicators of the lack of food security in India. As we know all too well, within 2-3 weeks of the national lockdown, the nation witnessed the scene of crores of workers walking back hundreds of miles to reach their native state as the government machinery failed to reach them with ration and basic necessities needed for survival. The relief measures announced by the Central government were clearly not sufficient, as even those with NFS ration cards were finding it difficult to sustain their families, what with loss of earnings and absence of minimum quantities of essential food items which should have reached them through the PDS system. At best some rice or wheat was made available, but not other essentials like dals, oil, spices and sugar.

Days after the migrant crisis had hit us badly, the finance minister Nirmala Sitharaman announced an additional support of Rs. 3500 crores to provide for 5 Kg of ration per person and 1 Kg of dal per family to 8 Crore migrant workers even if they don’t have ration cards. What do these figures mean? It translates to a measly outlay of Rs. 437.50/per migrant worker, which is equivalent to a single day’s wages for unskilled work. During the second wave of Covid this year, there was no national lockdown but several states announced lockdowns and different types of restrictions. Using the excuse that there was no national lockdown, the central government its offer of 1 Kg of dal per family per month under the PMGKY, thus increasing the rampant food insecurity in the country.

According to a report in the Economic Times, the COVID-19 pandemic impacted all four aspects – availability, access, stability, and utilization – of food (Economic Times, 19 July 2020). As we have seen, the government extended inadequate relief. If one uses the official data on costs of procurement, transport and distribution, then the government has spent a paltry Rs. 2812.50 per person during the entire pandemic period (21 months from April 2020 to November 2021), even if one were to assume that the government actually provided 5 kg of food grains per person per month to 80 crore beneficiaries. This translates to an estimated expenditure of Rs. 14,062 for family of five, i.e. less than Rs 15,000 or around Rs 670 per month per family of five for the entire pandemic period. This amounts to less than the earnings of the two work days every month for most workers working in metro cities. People who have lost several months of wages receive this paltry amount to compensate. This is the reality behind the much celebrated ‘food security’ provided by the Modi government. This, in a situation wherein food grains alone cannot sustain families; 75-80 per cent of expenditure on food is through open market purchases where food inflation has already taken a toll.

The food crisis situation was made even worse by rising inflation caused by supply side bottlenecks and impact on logistics due to the lockdown situation. India’s food inflation zoomed to over 11 per cent in October 2020 from 10.68 per cent in September that year. This pushed retail inflation to over 7 per cent. Food and beverages have the highest weightage of over 45 per cent in the overall retail inflation index (The Print, 18 November 2020). For two straight months, May and June 2021, retail inflation as measured by the Consumer Price Index (CPI) grew on the back of higher food and fuel prices, and remained higher than the Reserve Bank of India’s upper tolerance level of 6%. This soaring inflation due to persisting supply side issues and bottlenecks has not given any respite to the poor.

The pandemic brought several families who were otherwise surviving without the NFS scheme to the brink of destitution. Instead of increasing the scope of NFS in this dire situation, the government of Rajasthan did the opposite. It has put new NFS registrations on hold for more than one year, adding to the exclusion of people from much needed state support. According to the state government, the number of beneficiaries allowed by the central government under the Food Security Act (4.46 crores) has already been crossed in the state; Rajasthan has 4.82 Crore NFS beneficiaries (Indian Express, 2 October 2020). According to the Food Security Act, coverage is meant to be eventually extended to 75% of the rural population and 50% of the urban population (around 67% of the total population). Currently, approximately 57.3% of the population is covered. Moreover, since coverage is not universal and updating of beneficiaries takes place only once a decade after the NSS surveys, lakhs of families are left in the lurch. At a time when a more relaxed approach towards inclusion of beneficiaries was the need of the day, the system is following a process of continued exclusion.  The need of the hour is to move towards a universal PDS system, where an exclusion criteria is laid out (government job, large land holding, building holdings etc.) rather than an inclusion criteria. This should be accompanied by a vast strengthening of the public procurement system in terms of quantity as well as variety of crops. The Modi government is, instead, taking the opposite route. π