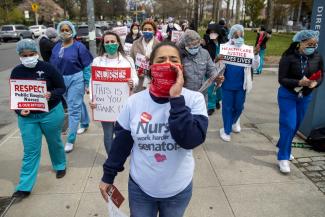 The United States (U.S.) does not have a publicly funded health care system for the entire population. More than half of the population have private health insurance provided by their employers. Medicare is a government funded program for people over the age 65 and some disabled younger population. Medicaid serves adults with income below a designated federal poverty level. In addition to Medicare and Medicaid, there are government funded health care program for children from poor families and for veterans (such as those in the U.S. armed services). Public Citizen's report has estimated that 87 million Americans were uninsured or underinsured prior to the Covid-19 pandemic. It is estimated that by February 2021, 143,000 Covid-19 related deaths may have been associated with poor or lack of health care coverage (National Center for Coverage Innovation at Families USA analyzed research from Johns Hopkins University). A study published in the American Journal of Public Health in 2019 showed that 530,000 bankruptcies filed annually were because of the inability to pay bills from medical illnesses.

Who profited from the broken health system during the pandemic?

The New York Times (NYT) looked carefully at tax filings of 60 of the country’s largest hospital chains, which received a total of more than $15 billion from the economic stimulus package during the COVID pandemic from the U.S. government's CARES Act. The article states "And together, they awarded the five highest-paid officials at each chain about $874 million in the most recent year for which they have disclosed their finances".

HCA Health Care, one of the world's wealthiest hospital chains, received $5.3 billion in bailout funds, it was worth $36 billion in 2019. Its CEO received $26 million in 2019. Tenet Health Care, another profit hungry health care system, received more than $2 billion in similar grants. A non-profit health system such as the Mayo Clinic, received hundreds of million dollars. Not only that some of these hospitals did not provide enough personal protective equipment (PPE), 36 out of the 60 chains that NYT looked at, laid off, cut back the salaries or furloughed their employees. The non-profit hospitals in the US do not pay federal or state taxes as they are supposed to benefit their communities. Politico's investigation showed that the country's top 7 non-profit hospitals collected more than $33.9 billion in 2015 while free treatment for the poor was down from $414 million in 2013 to $272 million in 2015.  The average CEO's package of a non-profit hospital in the country is $3.5 million. Average compensation to a CEO, over a 10-year period, increased by 93%, while for a nurse, the average compensation increased by a mere 3%.

"We went from heroes to

St. Vincent hospital in Worcester, a city close to Boston, is owned by a Texas based Tenet Health Care. This is a profit-oriented health corporation which posted profits of $ 413 million for the final quarter of 2020. In 2000, St. Vincent hospital nurses became part of Massachusetts Nurses Association (MNA) and won their first contract after a historic strike of 49 days - when they were refused mandatory overtime and other policies that were used to avoid hiring more nurses.

On March 8, 2021, the International Women's Day, more than 700 nurses at St. Vincent hospital went on strike after trying to negotiate with the management for several months. Their demands included better nurse to patient ratio, additional support staff to help patient care, prevent patient falls and management errors. Nurses had been highlighting the unsafe conditions for more than 2 years. Prominent signs include “ON STRIKE for safe patient care" “Healthcare - Not Profits" - a reflection of the advanced consciousness of the striking nurses. The nurses received support from various socialist organizations and communities. Tenet Health Care, in the meantime, spent millions of dollars in hiring security and replacement/scab nurses and scaled back operations at the hospital. The MNA, just a few days ago, said its members at St. Vincent Hospital in Worcester were going to accept the latest offer from Tenet Health Care that addressed many of the staffing issues until the corporation said they would not allow some of the nurses to return to work at their previous positions. The two sides are expected to return to negotiations soon with a federal mediator.

In 2020, there were 8 major strikes, more than 50% of these were by nurses across the U.S. 7800 nurses, nurse assistants, lab technicians and other workers struck work against Swedish-Providence hospital, a large so-called non-profit hospital corporation in Seattle, Washington from January 28-30. This is a giant $24 billion corporation with an $11 billion cash reserve. The demands of the workers were familiar, safe nurse-to-patient ratios, reduced workloads for housekeeping staff, safeguards against racial discrimination and for fair wages. Kshama Sawant, the progressive Seattle Council Member, was among the tens of thousands of people in Seattle who stood by the workers. She said "I stand in full solidarity with the thousands of courageous nurses and other caregivers at Swedish-Providence, proud members of SEIU (State Employees International Union) 1199NW, who are standing up for our entire community".  Sawant added, "… when you win, it will be a victory not just for the Swedish (hospital) caregivers, but for the entire working class in the region, and for the entire country". In April 2020, as the COVID pandemic was causing a huge devastation, the union and hospital management signed a contract which included wage increase, addition of more full-time positions to provide some relief for nurses and some racial justice initiatives.

More than 3600 healthcare workers died working on the frontlines during the COVID pandemic and nurses accounted for a third of these deaths. Nurses and other healthcare workers expressed frustration at work conditions that spurred strikes across the country in 2021. 1000 nurses held a one-day strike, in June 2021, for better wages and staffing at Cook County Hospital in Chicago, which served poor, largely African American population. The National Nurses Organizing Committee (an affiliate of the union, National Nurses United), reported that the strike was instrumental to a four-year labor contract announced on July 3. The union said that the Cook County Health agreed to hire 300 additional nurses over a period of 18-months, to put in place stronger infectious disease control and to implement wage increases.

The struggle for universal public funded health care for all in the U.S. has been a long-drawn battle. In 1945, 75% of Americans supported national health system which dropped to 21% in 1949 due to the powerful propaganda linking socialized medicine with the "communist" Soviet Union. In 1946, the American Medical Association worked with big insurance companies, hospital associations and pharmaceutical companies to defeat the Wagner-Murray-Dingell Bill and for a publicly funded national health insurance program. During the same period, the Congress of Industrial Organizations (CIO) expelled 11 unions led by communists. The passage of the Labor Management Relations Act – Taft -Hartley Act in 1947 was a big setback for the labor movement. It introduced several anti-labor provisions, including employment-based private health care insurance programs. While unions in Europe were waging struggles for a national health care, all the energies of unions in the US were directed towards obtaining private health care benefits for their members. This restrained the working class from waging a concerted struggle for a publicly funded universal health care. The healthcare industry is not a single entity but has several competing sectors - American Hospitals Association which represents profit hungry hospitals; the private insurance companies of a whopping $670 billion business; and also the big pharmaceutical companies. In spite of their differences, they have come together with some other groups to form Partnership for America's Health Care Future to fight ‘Medicare For All’ - a publicly funded national health care program.

What is to be done?

The unions representing nurses and other healthcare workers are big supporters of the Democratic party in the US which is a party representing the interests of big business.  According to an analysis of data from the Center for Responsive Politics, more than half of all contributions from pharmaceutical and health products industries went to politicians from the Democratic party during the 2019-2020 U.S. election cycle. The healthcare unions, while they play an important role, are only able to get some concessions and fringe benefits for their members. The COVID pandemic in the US, with more than 6,00,000 deaths has laid bare the inhuman state of health care in this wealthy country.

Just as the billionaires of the healthcare industry have developed a united front, it is important to forge unity among different sections of the working class across unions and also with unorganized workers. The challenge before the revolutionary parties and grassroots organizations in the U.S. is to develop a mass struggle either independent of the unions or in alliance with them. This should help to dismantle the private healthcare industry and to achieve universal quality healthcare for all. π