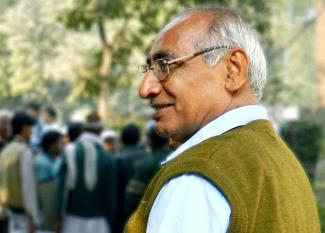 Comrade Ramkishan, a tall and veteran leader of Health Workers Movement and All India Vice President of AICCTU, suddenly passed away on 17 August 2021 while on a morning walk near his home in Shriniwas Puri, Delhi due to massive heart attack at the age of 72. He is survived by his wife, a son and a daughter. His sudden and untimely demise is a great loss to the trade union movement as a whole and particularly to the movement of health employees in the country. Till the very last, he was his usual cheerful active self, helping comrades get vaccinated, and organising health workers to highlight how Covid-19 made their exploitation and insecurity worse.

Comrade Ramkishan was born on 13 July 1949. His was a refugee family from Multan, Pakistan, which finally settled in Shriniwas Puri, after his brief stay in Haryana. He lived till his last days in a small house in this colony. Hailing from a humble, ordinary family, he had to work in a milk depot of Delhi Milk Scheme in the colony to pursue his education.

From his college days, he was a fighter for the rights and interests of people. He joined Desh Bandhu College in South Delhi for graduation around 1970. He fought for the cause of students and became President of student union as an independent candidate defying the influence of powerful unions led by RSS-backed ABVP and Congress-backed NSUI. He was also active in JP movement. Thereafter, his whole life was dedicated to the cause of the working class.

After completing his studies, he joined work at CGHS (Central Government Health Scheme) in mid 1970s as Lab Technician. His trade union journey began with organising employees of CGHS. Beginning from Delhi, he organised the CGHS employees throughout the country, led several struggles and formed AICGHS Employees Association. He was its General Secretary until his retirement. He used to give special emphasis on organising women employees and played a key role in developing the women’s wing of this association. During his journey as a fighter for the interests of working class, he came close to the communist ideology and became a member of CPI-ML in early 1980s.

Com. Ramkishan took initiative to intensify the struggles of central govt. health employees at all India level against privatization policy since 1990s, and went on to become the general secretary of Central Health Employees’ Federation (CHEF). He strived to bring employee unions of various central, state and autonomous hospitals and health institutions under one platform. This led to the formation of All India Health Employees and Workers Confederation (AIHE&WC) in 2010 and he led the confederation as its General Secretary till the last of his life.

Com. Ramkishan was instrumental in leading several struggles on the issues of health employees and against privatization and was arrested many times. The most notable struggle was the all India struggle in 2009 (just a few months before his retirement) in which he was imprisoned for more than a week. Along with movements of govt. health employees, he played leading role in struggles of private sector health employees too, the most noteworthy being the struggle of employees of Moolchand Hospital, Delhi. He played important role in formation of workers unions in other sectors too, like the DTC Workers Unity Centre. He was an advisor in Shramik Solidarity, a Hindi publication of AICCTU.

Com. Ramkishan was not confined to organising regular employees of health sector but dedicated himself to organising contract and temporary health employees in the wake of contractualisation and outsourcing, and played a key role in the formation of their unions in various hospitals and institutions finally forming Contract Health Employees Federation in the 4th national conference of AIHE&WC on 2-4 February 2020 at Jabalpur, just before the Covid-19 lockdown. He was sensitive and concerned over the ever weakening public health system of the country and the peoples’ right to health. In the last few months, he made plans to build a “Right To Health” movement in India where health workers and people could come together, recognising health as a public good and not a private relationship between profiteer/service provider and "consumer". Com. Ramkishan was an extraordinary leader of various sections of health employees and remained the flagbearer of the working class of the country.

Today, the health sector is facing the onslaught of privatization and contractualisation, the entire public health system is being demolished and its abysmal condition has been thoroughly exposed during the pandemic. In such a situation, building a country-wide movement on the most vital issue of strengthening public health and integrating with it the movement of health employees has become a primary task, and taking this task forward will be the true tribute to Comrade Ramkishan.

Revolutionary tributes to Comrade Ramkishan! It is our solemn duty to take forward the unfinished tasks he has left behind. We will continue to be inspired by his tireless dedication and commitment towards the cause of the working class.

We share our deep grief with his bereaved family, friends and comrades.