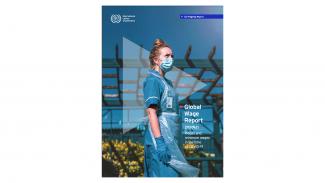 The International Labour Organization (ILO) has brought out its report on trends in global wages during Covid-19. The report examines the change in real wages across the globe in 2020-21, which is a pandemic hit period. The 2020-21 report also analyses impact of implementation of minimum wages on wage inequality.

Important Highlights from the Report

The Report endorses the widely known fact that the working class has received the hardest blow of lockdowns enforced in different countries of the world in a Pandemic hit time. The working class has all over the world faced massive retrenchment, wage cut and non-payment of wages in 2020-21. The ILO report emphasises the aspect of change in real wages, impact of minimum wages and wage inequality.

The report is divided into three broad parts - recent trends in wages, minimum wages and Inequality, and Wage policies for a people-centred recovery.

Between 2008 and 2019 real wages more than doubled in China. Among advanced G 20 economies, wage growth rate accelerated the most by 22 percent in the Republic of Korea, followed by 15 percent in Germany. In contrast, real wages declined in Italy, Japan and United Kingdom. Amongst emerging G 20 countries, China stands out with a constant rise in wages among other countries in this group. Mexico also experienced a significant growth in average real wages over this period. Nevertheless, in spite of more rapid wage growth, the level of average wages in emerging economies, remains substantially lower than that in advanced G 20 economies. Converting all G 20 countries’ average wages into US dollars using Purchasing Power Parity (PPP), exchange rates yields a simple average wage of some $ 3,780 per month in advanced economies and about $ 1,850 per month in emerging economies.

The report notes that in the last 20 years, a gap was observed between wage growth and productivity growth, particularly in some high-income countries. Overall, it may be seen that labour productivity increased (+21%) more rapidly than real wages (+ 14.3 percent) between 1999 and 2019. Thus, overall, the de-coupling of wages from labour productivity explains why the share of wages in GDP in many countries for this period remain substantially lower than those in the 1990s.

In the first half of 2020, as a result of COVID-19 crisis, a downward pressure on the level or growth rate of average wages was observed in two thirds of the countries for which recent data are available. In other countries, average wages increased, largely artificially, as a reflection of the substantial job losses among lower paid workers. The impacts of the crisis on total wages have been different for men and women. Women are disproportionately more affected in the crisis. The crisis has also affected lower-paid workers disproportionately, thereby increasing wage inequalities.

In India recent evidences suggest that wages of formal sector workers have been cut by 3.6 percent while informal workers have experienced a much sharper fall in wages of 22.6 percent (Estupinan and Sharma 2020). Similarly, studies in other countries mostly show that there has been wage-cut during COVID-19 times, though level is different based on specific conditions of different countries and policies adopted by their respective governments. However temporary wage subsidies have enabled many countries to lessen the effect of the crisis of wage inequality.

As per the Report, an estimated 327 million wage earners in the world are paid at or below the applicable hourly minimum wage. This figure represents 19 percent of all wage earners and included 152 million women. Women are over-represented among minimum and sub-minimum wage earners. The Report suggests that minimum wages can make a significant contribution towards narrowing gender pay gaps.

The report further states that the extent to which a minimum wage system may reduce wages and income inequality depends on at least three key factors: the “effectiveness” of minimum wages, the level at which minimum wages are set and the characteristics of minimum wage earners.

Using micro data for a set of 41 countries covering Africa, Asia, Europe and Latin America, simulations suggest that improving the legal coverage and compliance with the minimum wage as well as raising the level, for example, up to two-thirds of the median, have the potential to reduce income inequality significantly. The report notes that in low- and middle-income countries, where informal work is prominent, if full compliance with the minimum wage does not extend to wage employees in informal jobs, the potential reduction of inequality becomes much lower.

As mentioned earlier, impact of a minimum wage on inequality significantly depends on the level at which it is set. Results show that minimum wages are set, on average, at around 55 percent of median wage in developed countries and 67 percent of median wage in developing and emerging economies. Globally the median value of gross minimum wages for 2019 is equal to US $ 486 PPP per month. The report in one of the appendices tells that national minimum floor wage for India has been set at mere Rs 176 per day, much lower than global average. Sufficiently frequent adjustment is crucial to maintain minimum wages at an adequate level, and a very low level often reflects failure to adjust rates regularly over time. Social dialogue is at the heart of an adequate minimum wage system. As prescribed by the Minimum Wage Fixing Convention, 1970 (No 131), setting an adequate minimum wage level should involve social dialogue and take into account the needs of workers and their families as well as economic factors.

The groups most frequently excluded from minimum wage systems across the globe are agricultural and domestic workers. An estimated 18 percent of countries (29 countries) with statutory minimum wages exclude either agriculture workers, domestic workers, or both from minimum wage regulations. One of the most significant indicators of non-compliance is the high incidence of informality, which poses a major challenge for the enforcement of minimum wages. Women are generally over-represented among low paid workers and similarly, young workers aged under 25 with lower education levels and rural workers are over-represented. Regarding labour characteristics, the report shows that sub-minimum and minimum wage earners are more likely to have temporary contracts and part time jobs than those paid at higher levels. They also work more hours on an average. An estimated 46 percent of those paid at or below minimum wage worldwide are employed on temporary contracts; 14 percent of them work part-time.

Wage Policies for a People-Centered Recovery

The Report indicates that adequate and balanced wage policies, arrived at through strong and inclusive social dialogue, are needed to mitigate the impact of the lockdown-pandemic crisis and support economic recovery. In near future, the report predicts, that the economic and employment consequences of the COVID-19 crisis are likely to exert further downward pressure on workers’ wages. In this context, the report suggests that adequately balanced wage adjustments, taking into account relevant social and economic factors, will be required to safeguard jobs and ensure the sustainability of enterprises. This will also help in protecting the income of workers and their families, sustaining demand and avoiding deflationary situations.

In planning for a new and better ‘normal’ after the crisis, adequate minimum wages could help to ensure social justice and reduce inequality. The empirical study in Part II of the Report shows that when minimum wage is set at an adequate level, it legally covers those employed in low-paid jobs, and is well enforced, it helps in protecting workers against unduly low pay. Furthermore, to be most effective, minimum wages must be accompanied by other policy measures that support formalization of the informal economy, the creation of paid employment and growth of productivity among sustainable enterprises. Minimum Wage is only one in a set of policies-which include social protection and fiscal policies-that can be used to promote economic growth with social justice.