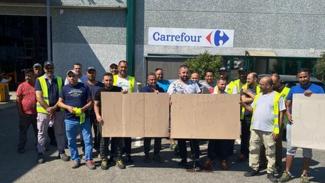 It is obvious that the militant struggles of the class-oriented trade unions bother the bourgeois class, its state, and its political representatives who blatantly violate any notion and concept of trade union and democratic rights and freedoms.  The trade unions and trade unionists are being persecuted for organizing strikes, protests, and demonstrations in the logistics sector.  They are openly and unashamedly being persecuted because they are defending their own class interests and fighting for dignified working and living conditions.

This new attack must not remain unanswered by the class-oriented trade union movement and all those who are opposing the authoritarian practices that are increasingly being imposed all over the world.

The World Federation of Trade Unions calls upon its affiliates to stand beside the trade unionists in Italy and condemn the new attacks with a protest to the embassies and consulates of Italy in their countries, sending the clear message that the workers in Italy are not alone and the attempts to subordinate the militant unions are in vain.  They cannot stop the class struggle, they never could!