Solidarity Letter: AICCTU Stands in Solidarity with the Workers of France 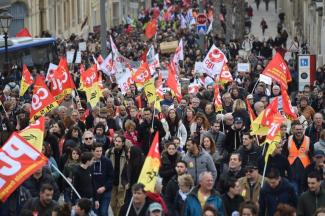 Congratulates the Working class of France for their massive Strike Struggle

On behalf of the rank and file of All India Central Council of Trade Unions (AICCTU), we extend our solidarity with the CGT- led strike struggles culminating into 18th October 2022 general strike of workers of various sectors of France against soaring inflation and wage stagnation.

We strongly condemn and oppose the French government's undemocratic, illegal tactics of requisitioning the struggling and striking workers.

Amid the COVID-19 Pandemic, we are witnessing an increasing global trend of deep nexus between governments and corporations to trample hard earned rights of the working class.  Under the false flag of economic loss, governments and corporations are spearheading a campaign of wage stagnation and job retrenchment across the world. At the same time, rising inflation and cost of living have left a devastating imprint on the lives and livelihoods of the working people of the world.

In India also, we are witnessing attempts by the far-right Modi government to destroy the rights of the working class and farmers. New labour codes, privatisation of public sector entities and crackdown on people's movement by the government in collusion with big private corporations are increasing every day. The united working class movement in India continues to resist the anti-worker moves of government.

The rich and the powerful have turned the crisis of global Covid pandemic to be an opportunity for themselves to push through the implementation of neo liberal reforms at a break-neck speed and for unleashing anti-people measures.

We congratulate the working class of France and rank and files of CGT for the historic strike against the anti-working class policies of President Emmanuel Macron. The strike in France, like many others we are witnessing across the world, will surely inspire more working class actions.

Ils ne passeront pas ! Yes, they shall not pass! It is the working class and toiling masses who create this world with their labour! The strikes and direct actions across the world are a warning message to the anti-worker forces that any moves that will adversely impact the lives of workers will not be tolerated and fought against.

Long live the Unity of Workers of World

Long live the Unity of Workers of France and India