Turn 2023, into a Year of Militant Struggles of the Working Class! 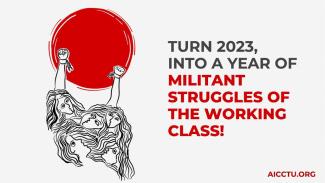 The Workers Resistance and AICCTU wish the working class of the country to turn 2023, into a year of militant struggles that is potential enough to overthrow the anti-worker Modi regime from the power in 2024 elections.

The year 2022 was a witness to brutal assaults on workers’ rights by the Modi government and also the workers' retaliation against it.

The year 2022 began with an all-India strike on 28-29 March and 2023 will begin with a call for workers' struggles through an all-India workers convention by the platform of all central trade unions in the country on 30th January.

Modi-led BJP government unleashed a comprehensive assault on the working class to favour corporates throughout the year. Privatisation of public wealth and the public sector is in full swing. The BJP is committed to selling the entire country. As privatization is not sufficient to hand over the entire country to the corporates, the Modi government discovered a new route of National Monetisation Pipeline (NMP) to hand over the infrastructures, mineral wealth and natural resources.

In order to push the working class into the vagaries of the labour market, all labour laws are being scrapped, and 4 new corporate Codes are legislated and are waiting to be enforced at an opportune moment.

The UAPA (Unlawful Activities Prevention Act), the authoritarian and undemocratic black law, is being used against workers for raising their legitimate demands, against the right to strike and to suppress any dissent against the regime.

The year 2022 was also a witness to a high degree of reverse migration. The unemployment levels have spiralled up. Worst still is the decline in the rate of labour force participation to 40 per cent. The fact that more than 60 per cent of employable persons are out of reach of the labour market is a matter of serious concern for the country’s economy.

Vision 2047, coinciding with the Freedom 100, is a fatal blow to the working class movement. Modi is dreaming of a country where workers will not have any rights, and will be treated like bonded labourers and modern-day slaves. The government is proposing a model of work similar to gig and platform workers to whom neither labour laws will be applicable nor will they be able to claim it by nature of their work. Fixed Term Employment (FTE), contract, trainee, apprentice, etc., have become a euphemism for “Hire and Fire”.

Wage loss is another major assault on workers. In the name of changing the base year for VDA (Variable Dearness Allowance), any meaningful compensation to fall in real wages and inflation is snatched away through the backdoor. The introduction of the concept of floor wages accompanied by reduced VDA is depressing wages much lower than the ‘starvation wages’ called “minimum wages”.

ILO Director-General Guy Ryder says that there can be no real recovery from this pandemic without a broad-based labour market recovery. And to be sustainable, this recovery must be based on the principles of decent work – including health and safety, equity, social protection and social dialogue." He also added that we are already seeing potentially lasting damage to labour markets, along with concerning increases in poverty and inequality.

But, Modi is creating a vast army of unemployed and a slave army of workers to suit his inhuman politics of hate and Hindutva. This was the year 2022.

The second innings of the Modi government has witnessed a historic farmers’ struggle, robust strikes of various sections of the working class and bigger outbursts of unemployed youth, among struggles of other sections of the people. These struggles on people’s issues are potential enough to overthrow the fascist Modi-led BJP regime from the echelons of power in 2024, which has emerged as a symbol of destruction, devastation, and communal hatred.

Let us turn 2023 into a year of waves and waves of militant struggles!
Let us strengthen Solidarity and Unity!
Let us fight for Liberty and Equality!
Let us Resolve to Defeat the Modi regime in the 2024 elections!
Red Salutes!