Interview: More than 8 Months of the Farmers’ Movement- The Challenges Ahead 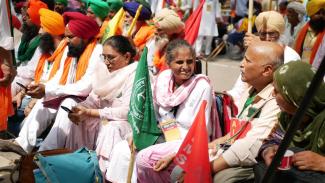 Q: Its been more than 8 months since farmers came to Delhi’s borders with their demands. Modi Government has tried to launch all kinds of offensive against the agitating farmers including its propaganda machinery, instead of engaging in any meaningful talk. How do you see the movement in coming days?

Despite all the attacks and propaganda our movement has become bigger with time. The more the Modi government and RSS-affiliates are trying to undermine our struggle, the more the government and the corporate-communal forces are failing.

The ambit of the movement is increasing and taking new forms. From organizing district and block  level programs to centralized mobilizations – at every stage the struggle is taking new forms. There’s a new freshness in the movement. It would in fact be better to say that this movement has managed to capture the imagination of all sections of the society. There is always a sense of ‘freshness’ as opposed to lassitude. The movement is increasing day by day.

There is an ongoing ‘Kisan Sansad’ which started on 22nd July. It is a kind of parallel parliament of the people; while the parliament of the electoral representatives is in session behind barricades and high walls – the people’s parliament is on the roads, among the people. It is yet another experiment being done by the initiative of the farmers’ organizations. Interestingly a ‘people’s whip’ from the farmers organization was issued to all opposition MPs (Members of Parliament) on 17th July. All opposition MPs have been asked to take up the issue of farmers and refrain from boycotting the parliament. It is perhaps the first of its kind ‘people’s whip’, which is forcing the opposition to take up the issues of farmers more seriously. Through our unity and struggle we have ensured that the voices on the roads percolate the walls of the parliament.

When the government is running away from the questions and the parliament is being suspended, common people are showing their interest in this people’s parliament. It will go on till 9th August. Every organization is allowed to send maximum five people to the Kisan Sansad. The people at the borders eagerly wait for their chance to attend the program.

Q: The farmers movement is showing us ways in which people can organize and struggle against the most oppressive of regimes, this country has seen. The government has repeatedly been trying with the help of pliant media houses to portray the movement as that of only rich farmers. Please tell us about the participation of small-marginal farmers and workers in the movement.

This propaganda of the government has failed to dent our movement. Like the general scenario, the number of ‘big’ farmers is considerably less than the marginal and middle peasantry. There are also a good number of landless labourers and youth from the cities in this movement. This movement has very consciously tried to bring different – and especially marginalized sections of the society together to fight for the cause of common people, which is evident in the forms and programs of the movement. We are consistently trying to make it even more democratic and encompassing. The movement belongs to the marginalized and hard working sections of the society. Even in Punjab most of the farmers have very little land holdings. Those who want us to see tractors as the ‘ultimate’ symbol of prosperity are deliberately trying to shield the owners of ‘private planes’ and ‘Antilias’.

Q: The ongoing Kisan Sansad  is testimony to the fact that despite mounting pressure and attacks, the joint platform of the farmers’ organizations has once again brought the issues of the farmers and workers into limelight. It is well known that the women leaders especially from Punjab and Haryana have been at the forefront of the movement be it the borders of Delhi or numerous sit-in agitations going on everywhere in the country. Can you tell us a bit more about the participation of women in the movement?

Very recently, on 26th of July – an all women’s parliament – ‘Mahila Sansad’ was organized as the part of ‘Kisan Sansad’ program. We will again see a greater participation of women in the Kisan sansad on 9th of August. This movement has seen many women martyrs among a list of more than 550 people who have sacrificed their lives. Two tribal women from Maharashtra have been martyred in this movement. Leaders like Comrade Jasbir Kaur Natt of Punjab Kisan Union have emerged as a prominent face of this movement. Medha Patkar, Pratibha Shinde, Kavitha Kurganti – all well known activists have been associated with the movement since the beginning. There has been a large participation of women from Andhra Pradesh, Telangana, Tamil Nadu, Rajasthan, MP, UP etc and not just Punjab and Haryana. Mazdoor Mukti Morcha – a leading organization of mostly dalit landless labourers has been consistently a part of this movement. A good number of women have attended the agitations under the banner of Mazdoor Mukti Morcha. Leader of landless labourers martyred.- Name of martyr -.

Q: All India Kisan Mahasabha has its presence across the country. Recently a member of AIKM was arrested in UP during a national program. What are the programs and agitations being organized in other states?

AIKM has a countrywide presence in 20 states/UT. We are at the forefront of organizing programs against the farm laws and other issues in these states. Mohammed Kalim, a physically challenged cadre of AIKM was arrested while undergoing physiotherapy at a clinic. He was beaten along with his daughter. UP’s Yogi government has been very vindictive towards our movement. Whenever there’s a program, the UP government through its police detains/arrests the leaders even before the day of agitation. Despite such crackdown programs are being planned. We have been organizing regular programs in Bihar, UP, Jharkhand, Tamil Nadu etc.

Q: What are the programs planned in near future?  Do you think the TU organizations and farmers organizations will see a better coordination and joint action in coming days?

On 14th July – a meeting of around two dozen farmers’ organizations was held in UP. AIKM has given a call of a series of programs with the slogan of ‘Teeno Krishi Kanoon Wapas Lo, Warna Gaddi Chhod Do’.  On 9th of August –a ‘Kisan Yatra’ will start from Ghosi in UP and reach Varanasi PMO on 17th August. On 1st September – a farmers rally will be organized in Sambhal. Sanyukt Kisan Morcha – has given a call for ‘Mahapanchayat’ on 5th September in Muzaffarnagar. Various district level rallies will be organized in UP in coming months. There are plans to strengthen the movement in Uttar Pradesh.

Trade Unions and farmers organizations have been continiously working together to coordinate their struggles. We have been successful in organizing some joint actions. We will try to increase this coordination in coming days – combining the demands regarding labour laws and farmers issues. π