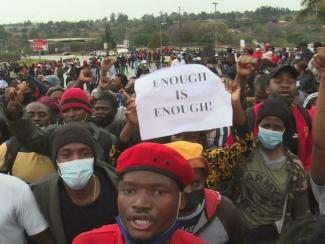 The strike witnessed heavy police repression with security forces using rubber bullets on the workers in picket lines on November 23.

The agreement states that salaries will rise by 2% each year till December 2023. In addition, if inflation is higher than that, employers will pay 80% of the difference between the 2% and the inflation increase.

Most of the metal workers are employed in the shipbuilding sector in the coastal town of Cadiz. Cádiz has an unemployment rate of 23%, one of the Spain’s highest. ν

Workers-Students Call for Democracy in Swaziland

The working class and students across southern African country of Swaziland have been up in arms for months demanding an end to the rule of Africa’s last absolute monarchy. Swaziland is officially ruled by King Mswati II since 1986 and has experienced brutal repressions against toiling masses and dissenters.

On October 20 this year, the police in the country’s capital Mbabane brutally assaulted workers protesting for their rights. Teachers, nurses and public sector workers were attacked while they were on their way to deliver a petition to the Municipal Council of the capital city, appealing for decent working conditions, a salary review, and basic trade union rights.

The Swaziland Association of Teachers (SNAT) said, in a statement, that the security forces fired teargas, used grenades and live ammunitions. Two buses ferrying public workers to the peaceful gathering were also stopped by the police and their passengers shot at with live bullets.

According to reports, at least, 36 workers were injured in the police violence. SNAT also denounced that a student, who was not part of the workers’ demonstration, was shot dead by a stray bullet.

The call for democracy has grown since mid of June this year, when protests broke out in the Manzini Region of the Swaziland demanding right to elect the Prime Minister through a democratic process. The protests quickly spread across the country with students, teachers and various sections of working class joining hands, calling an end to the authoritarian regime of Mswati II. At least, 28 people have died in the police violence and many others tortured, detained or abducted.

With workers and students taking the lead in demanding democracy and rights, the authorities have embarked on acts of harassment and union busting against trade unions and students’ organizations. Members of Trade Union Congress of Swaziland (TUCOSWA), Swaziland National Association of Teachers (SNAT) Swaziland National Union of Students (SNUS) are regularly faced with arrests, detentions and physical threats.

The ruler of Swaziland, Mswati lives a lavish lifestyle, while the national poverty rate of about 63 per cent and an unemployment rate of 41 per cent. ν

The people of Honduras have unitedly defeated the conservative and neoliberal forces backed by the United States and elected the first female president Xiomara Castro of the left-wing Liberty and Refoundation (Libre) Party. According to reports, Castro of the Libre Party has obtained over 53% of the votes, and is leading the presidential race by a 20% margin.

Castro’s victory is a big blow to the US imperialist project in Latin America. Her husband Manuel Zelaya was ousted in the US-backed coup d’état in 2009. On June 28, 2009, Honduran Special Forces detained President Manuel Zelaya from his residence at gunpoint and sent him to exile in Costa Rica. The coup allowed the Honduran right wing to re-entrench itself in the country and they remained in power using fraudulent elections.

The last electoral process, in 2017, was marked by widespread irregularities leading to protests across the country demanding a re-election. The government of Juan Orlando Hernández, belonging to right-wing National Party of Honduras imposed a curfew and launched violent repression against protesters. More than 30 people were killed during the police violence. Despite the protests, JOH was declared the winner and managed to secure a second term.

Libre Party was founded in 2011 by the National Popular Resistance Front (FNRP), a left wing coalition of organizations that opposed the 2009 coup.

The victory of Castro and Libre Party comes at a point when Honduras have been facing  decades long rampant neoliberal policies that plunged the country into a “neoliberal hell.” The Latin American country had been witnessing skyrocketing prices and inflation and widespread impunity for murders, rapes, and other abuses committed by Honduran security forces – “and all with the help of increased US military and police aid”.