The Construction Sector: Changes, and the Union Practices 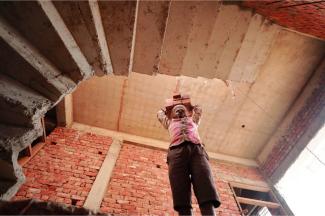 [This is a paper presented by Comrade SK Sharma, the General Secretary of AICWF (All India Construction Workers Federation), affiliated to AICCTU in an all-India workshop held at Ranchi, Jharkhand on 9 – 10 Nov. 2022]

The construction industry is divided into three sectors. The two primary sectors are Infrastructure and Real Estate. The infrastructure sector comprises of roads, power, bridges, ports, rails, and urban transportation & building projects. The real estate sector comprises of housing, retail, hospitality and commercial.  Apart from this, the third sector is the private small and medium house building construction of individuals and small roads, bridges construction by petty contractors in urban and rural areas.

The construction sector in India is one of the largest employers of migrant and casual workers. It acts as gateway for urban employment once people seek a way out of agricultural work. Rise in migration is driven by growing opportunities in construction sector because of the rapid growth of small cities across the country.

The report of the Second National Commission on Labour warns that "The present trend towards induction of modern technology in the construction industry is likely to transform the traditional labour market and indicates that there would be increased mechanization and manual and women workers would, therefore, be increasingly eliminated from large construction project.” [AB2]

There are two major players in the industry as far as decision making and implementation is concerned - builders or developers and labour contractors. The labourers and workers are not aware of industry structure or way of operation.

In most cases, the developer gives the contract to the labour contractor in two manners: -

Traditionally, the construction sector has been a highly profitable labours intensive industry whose profits have come largely from total exploitation of the work force. Even the minimum wages are rarely paid in this sector. No labour laws operate in construction sectors, not even on the large site and job security is unknown.

The recruitment to big infrastructural projects is undertaken through circuits that are regional and even national while the casual labour markets respond to specifities of local social history. The migrant workers in an infrastructural building site/mega project site are recruited through contractors who operate with workers across multiple sites in the country, thus involving the mobilization of large number of workers.

A small house building construction site, however, is deeply embedded in local relations of power where trade unions influence wages through everyday intervention in the casual labour market.

Some workers sell their labour power on a daily basis. They wait at intersections and junctions in cities in the morning to meet their employers and/or contractors. These meeting places are called labour chowk or nakas. Capital, faced with social history of labour in specific area, recruits workers from far away area, e.g. in Karnataka from north and north-eastern India.

There are three categories of construction labourers:

i) Local labourers who are from the city and nearby villages.

ii) Seasonal migrant workers who migrate for the stipulated period other than the monsoon.

India's 4 crore construction workers are literally the builders of modern India. They build the roads and highways, the railway tracks, airport, and ports that connect the vast subcontinent and make India one country, spanning all its distances and diversities. Construction Workers are the backbone of the economy as they create the infrastructure necessary for industrial growth.

Yet these workers, about one third of whom are women and children, who are creating the base of the new economy, themselves live in a time warp, trapped in low skilled, low paid, insecure working conditions bound by feudal working relationship often in bondage.

As per India Labour and Employment Report 2014 an overwhelming 92 percent of workers in India are engaged in informal employment, majority of them have low earnings with limited or no social protection. India has 36.2 million workers working in the informal construction sector. While the registered workers are covered under the welfare schemes formed under building and other construction workers (regulation of employment and condition service) Act 1996; the data shows a registration of a mere 30 percent of these workers. In 2014 in Orissa, it was only 2%. Though the government is collecting cess at the rate of one percent of the total project cost as per the building and other construction workers welfare Cess Act 1996, the expenditure of the fund for the benefit of workers stands at a mere 10%. In 2014 in Orissa, it was only 0.01%.

Payment of wage is one of the major issues being confronted. Another wage practice is that of not paying wages at all. The culture of wages includes non-payment, under-payment, and various breaches of agreement by contractors/sub-contractors.  The contractors promise a wage when they recruit workers and once the work starts, they delay the payment, pay less than what they promised and often do not pay at all. Breach of contract and cheating are considered outside the parameters of Capitalist rationality. Wages make us question the nature of agency of workers in surviving, resisting, and transforming capitalism.  Unionized construction workers can defend wages. Wages figure as one of the forms through which landscapes of capitalist relations changes on the ground.

The Casual nature of Employment affects the family income and livelihood. Absence of Social Security – about 93 percent of the workers suffer due to lack of social security. Workers work under uncertain working hours, and they work more than the normal hours without any overtime payment. They work under unsafe working conditions. While some developers pay for insurance of the labourers against any accident, provide safety guards like helmet, safety belt and gum shoes and provide sanitation, most developers do not provide any amenities or safety guards.

According to ILO, in Asia Pacific region 12.7 per lakh workers died in fatal accident during work and 3,80,000 workers die every year due to occupational diseases. According to the ILO, 6,00,000 lives would be saved every year if available safely practices and appropriate information to prevent occupational diseases is used. However, if capitalist profits determine the life of the workers, it is not possible.

The bricks kilns & stone quarry workers are usually far from human settlements, treated as bonded workers force to live in semi–internment conditions. Apart from the lack of shelter, lack of pure drinking water and electricity are the main issues being confronted by them.

Women workers in the construction sector do the most strenuous and unskilled job like brick making, stone quarrying, assembling of construction material, lifting of stone, bricks, and cement etc. The situation of women labourers is restricted to defined tasks and low wages. The wages paid to women is less than that paid to their male counterparts. No special facility is provided to pregnant women workers and no creche provided for children of women workers. Sexual harassment of women workers in the industry is also quite widespread. Women are most vulnerable to violation of labour laws and exploitative labour practices.

Sections of Construction Workers to be Mobilized

The workers engaged in construction sector are socially and economically marginalized in other ways too. Most of them are mainly adivasis, Dalits, backward castes, minorities, homeless and landless labourers. The biggest part of construction workers are migrant labours, due to which they are unable to organize themselves in pursuit of their common interest. This is because of certain constraints like casual nature of employment, illiteracy, lack of mobility, poverty, small, scattered size of establishment and lack of cooperation amongst workers. That's why 90 percent of them are still out of any trade unions or organizations.

Both migrant and non-migrant in the construction sector is largely informally employed with about 90% of migrants in rural areas and 67% in urban areas working as casual wage labourers. Migrant construction workers are mainly unskilled Seasonal migrant workers who work as wage labourers in agrarian sector.

Impact of the Labour Codes

After a long struggle, construction workers forced the Central government to enact

It is necessary for us to come together to fight against the Labour Codes that has resulted in the complete decimation of the rights of workers. It is necessary to build a class struggle against employers, contractors, builders, big corporate companies, and the government demanding increased benefits, job security, wages, safety from accident and occupational diseases, better living standard, shelter, and rights to dignified working conditions. We must re-orient our practice of mobilization and work culture. Class struggle need not necessarily mean struggle only against employers, contractors, builders, big corporate companies etc. It can also mean the struggle against the state.

We should be prepared to function effectively even after the scrapping of Construction Labour Welfare Boards. Seriously pursuing the above reorientation in our practice and work style, may be helpful in retaining the movement vibrant and dynamic even in the absence of Boards.

By this way only we can strengthen class struggle and the workers federation.

[AB1]Add a link in the reference