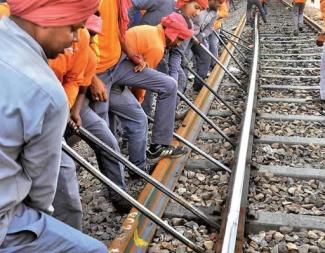 History of the Indian Railways gangmen dates back to the days of British imperialism when the first railway track was laid between Boribunder (Mumbai) and Thane in 1853. Poor Peasants having been uprooted from the land, left their villages for livelihood and got themselves engaged as labourers by a private railway company under the East India Company in laying railway tracks. Even in plague-affected areas they were forced to work hard without medical aid.

Even after Independence such annals of exploitation continued to evade the notice of the then political leaders of the country. They were employed by State Railways on daily rated wages without social security and were forced to work long hours beyond 12/14hours a day. Laying of  tracks, carrying wooden sleepers and unloading of ballast involved hazardous manual jobs. Gradually they got unionized and fought for 8 hours of duty, ganghut (resting room) and recess time. The designation 'Gangman' is replete with the East India Company’s notorious legacy of inhuman torture and exploitation. With their union's intervention the nomenclature got changed to Trackman first and   then to Track Maintainers as it stands now. But there is hardly any change in the working conditions, occupational safety and health of such a category of   staff. The railway trackmen are the most vulnerable section of railway men to accidents. They are often run over by the running trains and getting killed while attending to repair work or any flaws in the railway tracks. No full- proof safety measures or devices are provided to save them from accidents.

They are required to walk for kms. along the railway tracks for an average of 8 hours a day in inclement weather and  in remote places  by the side of  dense forests, often carrying 20/25kg monitoring equipment and other tools. They are duty-bound to check whether the ballast on track-bed below the sleepers is packed correctly, repair cracks and fishplate damages and make sure nuts, holds and welding are intact and check on the clips that hold rails to the sleepers.

Gangmen's Life during the Modi Regime.

During the first wave of the Pandemic Covid19 many gangmen were exposed to the deadly virus while carrying rails together with no scope to maintain physical distance. They had to carry out their daily task without masks, gloves, PPEs, head-covers and sanitizer bottles. Even during the second wave they were not treated as Frontline Workers and railway health infrastructure to remote places is so poor that most gangmen are not vaccinated against Covid infection and are dying without treatment.

Out of total gangmen's strength during the mid-90s, the privatisation policy reduced the strength gradually to 2.5 lakhs  as on today.  During this period massive contractorisation in track laying/replacement work has taken place.  Even track patrolling and general maintenance have been outsourced.  As a result there has been a massive reduction in posts, although this category is considered crucial in providing safety and security for the passengers and the crews.

The working conditions are worse so much so that the ganguts where they take rest remain in dilapidated condition with broken windows and roof leaking- even with no provision of drinking water and electricity. They're forced to work in subhuman conditions.

Being frustrated with the activities of the established unions they have formed their own organisations which, in turn, are closely associated with the left federation--Indian Railway Employees Federation. In some of the zonal railways the gangmen are organised in the unions affiliated to IREF & AICCTU to fight for their demands.

India has 67,367 km of railway tracks that are taken care of by track monitoring crew on a daily basis. Existing vacancies are not being filled up and 50 per cent of such vacancies are already abolished, throwing extra burden of work on the gangmen . The less said about the safety measures, the better.  After the abolition of a separate railway budget, allocation for the safety fund got drastically slashed during the Modi regime, jeopardizing passengers as well as gangmen's safety.  Instead of using modern means of communication, the gangmen still use the archaic system of bursting detonators to alert Loco drivers when a trackman sees a crack on the track. He starts running 600 metres to fix the detonators in order to warn the driver of danger. During the Modi regime approximately 768 gangmen were run over by trains while on duty on tracks.

Modi's new code on occupational safety, health and working conditions excludes gangman in railways whereas it brings the Mines and Dock workers under clause 6(1) (a) of the act ensuring that the workplace must be kept  free from hazards which may cause or likely to cause injury to the employees.

Will the National Occupational Safety and Health Advisory Board as mooted in the code advise the Ministry of the Railways about the gangmen's safety, the most vulnerable section prone to accidents in Indian Railways ?