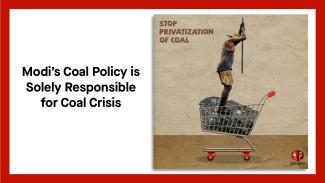 The present coal crisis, which has pushed the thermal power plants to the verge of closure in many states, is another addition to the list of devastating outcomes of the Modi government’s policies over the last more than seven years. Mid-night demonetisation, GST, sudden and unplanned cruel lockdown, handling of Covid-19, NMP and continuous, daily shocks of hikes in fuel prices, to name a few in the series of Modi’s policy decisions which have plunged the nation and its common people in a crisis and devastated people’s lives and livelihoods for the profits of his crony friends. Rather, Modi has become a synonym for shocks, crisis and devastation.

In the first week of October, a number of states, including national capital Delhi, started raising concerns about potential blackouts as a result of low coal inventory at thermal power plants with an average of four days’ worth of coal stock left against a recommended level of 15-30 days. Rather, the crisis had started 2-3 months back due to coal shortage in the face of the rising demand for power in the post-Covid period, with central government doing nothing to address this evolving crisis. Even after several states raising the concern, the central govt. continued to deny any coal crisis. The central government’s attitude of deliberate ignorance towards coal-power crisis rightly became comparable to its criminally apathetic attitude towards Oxygen crisis killing thousands of people during 2nd wave of Covid-19 pandemic. Modi government has also been charged by commentators with Policy paralysis and catering to the interests of private coal mining companies. However, after a lot of hue and cry the govt. started holding top level ministerial meetings involving the PM himself but just to offer reasons behind coal shortage like heavy rains, spurt in economic activities in the post-Covid period, sharp increase in prices of imported coal, etc., which were all evident from the beginning and should have been addressed in a timely manner. Meanwhile, Coal India Limited (CIL) augmented coal production, and coal supplies were increased to thermal plants bringing some relief for the time being. In this instance, we should note that coal and lignite fired thermal power plants account for about 54 per cent of India’s installed power generation capacity but currently account for about 70 per cent of power generated in the country.

This is the first-ever major coal crisis witnessed by the country since the nationalization of this sector in 1973. This crisis is not a surprise. If we look deeper into this crisis we find that it is a ‘Modi-made’ crisis occurring mainly due to reversal of the policy of nationalisation to give entry to private players, particularly his crony friends (essentially a pack led by Adani), dominating the mining and power sectors in order to mint money from these vast natural resources belonging to the country.

It starts with the policy of the Modi government, what he calls ‘freeing the coal sector from decades of lockdown’ and thereby opening the coal sector for commercial mining (mining by the private sector without any end-use restrictions) including 100 per cent FDI, dismantling CIL and finally doing away with the nationalised character of the coal sector. During the tenure of the governments before Modi’s, the mines were opened up to the private sector mainly for their captive use, but the commercial sale of coal thus mined was not allowed. Therefore, such mines still do not contribute substantially to coal production. The opening of the coal sector for commercial mining — which was immediately resisted by workers in the coal sector through a three day strike in first week of July — essentially started through auctions on 18 June 2020. This was the period of Covid, resultant lockdown/restrictions and virtually paralysed economic activities which helped private players to acquire coal mines at very low bids. So, in an easy ride to power on the waves of anti-Coalgate protests and the anti-corruption movement during the Manmohan Singh Regime, it is ironic that the Modi government has now virtually handed over the coal sector to his cronies and friends for a pittance.

To prepare the grounds for opening the coal sector for commercial mining, the CIL, which is the central government institution for coal production contributing 80 per cent to total coal production in the country, was weakened in a systematic manner. During 2014-16 (the initial years of Modi rule), CIL showed record production of coal so that not a single power plant in the country was short of coal. CIL had accumulated reserves and a surplus of around Rs 35,000 crore in 2015. This should have naturally been used for expansion plans. On the contrary, the Modi-1 government sucked out (as it did in the case of many other Central Public Sector Undertakings as well) most of these funds through forced dividends and buybacks to balance its ‘own budget’ and serve his crony friends, leaving CIL with only around Rs 8,000 crore as reserves in 2019. The CIL was obviously strapped for funds for its expansion plans. CIL was weakened by various measures, apart from stopping its expansion, including non-appointment of a regular CMD for more than a year since 2017, compelling CIL to invest in three fertilizer plants and ironically diverting its operations to setting up toilets under Modi’s pet project of Swachh Bharat Mission. This caused a stagnation of CIL’s coal production levels, which was 606 MT in 2018-2019, 602 MT in 2019-2020 and 596 MT in 2020-2021, that is, a decline of 10 MT. The production this year has further come down and in the present crisis, the production of CIL was 249 MT in the April–September quarter. While CIL was being weakened, the Modi government started auctioning off commercial mining in 2020; the two phases till August 2021 have offered around 100 coal blocks for commercial mining. While the production of coal by CIL is dwindling, there is no coal production worth mentioning by private owned mines as most of them are non-operational. Adding to this, the coal that was imported in the first three months of the crisis has also come down to due to soaring prices affecting the imported coal based power plants which are in private hands. This is what has given rise to the coal crisis, threatening a power shut down, directly emanating from the coal policy by the Modi government of freeing the coal sector from ‘decades of lockdown’ disguised as ‘Atmanirbhar Bharat’ (Self-reliant India).

'Coal for the Rich'

Leading the pack of bidders, Adani has bagged some of the biggest and richest mines by making the most of very low bidding during the lockdown period. As India’s largest coal mine developer, Adani has coal mines spread across Chhattisgarh, Madhya Pradesh, Odisha, and Maharashtra, apart from those in countries like Australia and Indonesia. At the same time, Adani’s coal company (Carmichael Coal) in Australia has also announced its readiness to export first coal from its Australian mining project this year. Just when prices of imported coal were soaring and India was entering into coal crisis, David Boshoff, CEO of Adani group’s Australian business arm (Bravus Mining & Resources India) announced in the month of June 2021 that India will be a ‘foundation customer’ for Carmichael coal and Bravus has already secured the market for 10 million tonnes per annum production. So at a time when the global prices of imported coal are too high and Adani is all set to import coal to India from its coal mines in Australia, the Modi government seems to leave no stone unturned to promote his business.

Meanwhile, the Modi government has started utilising this crisis as an opportunity to further push the interests of private players and foreign companies in coal mining and the power sector, as it did during Corona and lockdown to pass several anti-worker, anti-farmer and pro-corporate laws. The narrative that is being developed is that due to several legal and administrative hurdles in acquiring mines and making them operational, and above all, in the face of growing resistance by the people directly affected by mining, it is costlier and more difficult to produce coal in India for private mines than to import it. So the need is to remove these hurdles and further ease the path of doing business. The government is therefore moving ahead to take care of this need in the form of some immediate steps and assurances. Despite a record rise in international coal prices, the government is advocating that power generators using local coal should use up to a 10 per cent blend of imported coal for power generation. At the same time, ways and means are being explored as indicated by Power Minister RK Singh’s statement ‘that the government is looking at the law to see how imported coal based plants can be made operational.’

At the same time, the voices of advocates of privatisation have become louder in favour of increasing electricity tariffs and clearing the Electricity Amendment Act Bill (EAA) in the coming session of Parliament, the indication of which again has been given by Power Minister. Passing of this EAA Bill will totally throw open the power sector to private players.

In the wake of this crisis, purchase bids have already far outstripped supply leading to the average market clearing price of Rs 15.85 per unit up from Rs 2.35 per unit a month ago on the India Energy Exchange (IEX). It has been advised that generators could seek to increase the price they charge to discoms under Power Purchase Agreements with power distribution companies as these companies are currently meeting shortfalls in power supply by purchasing power at significantly higher rates on power exchanges. Imported coal-based generators, mainly owned by corporates (like Tata and Adani), which were closed for some time have already geared up to the situation and are making agreements with states at increased prices.

Although not much has been said and done by the government so far, in the near future there will be some major announcements and measures from Modi government seemingly to remove so called hurdles and push the interests of private players, particularly the Adanis, in the coal mining and power sector. The Coal policy along with EAA is not only directed towards wholesale privatization, but it will further increase the burden of electricity tariffs on various sections of common people and lead to ruin of employment and livelihood and increase job-insecurity.

The ongoing resistance against acquiring these mines will have to be further strengthened and working people and democratic forces will have to be battle-ready to resist and reverse these policies of the devastation of lives and livelihood and of putting India on sale.

Meanwhile, again in the background of the coal crisis, it is being said that there is a need to explore the field of renewable energy, and, you guessed it! — Once again, it is Modi’s crony and friend Mukesh Ambani who is being designated the leader in this sector, having recently acquired the biggest solar panel company of Europe! π