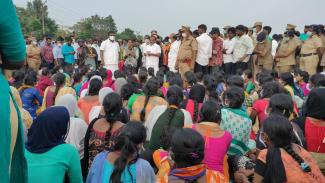 Don’t play with the lives of the workers!

Taiwanese Foxconn company situated near Sriperumbudur,  Tamil Nadu supplies spare parts to Apple-I phone and Amazon’s Fire stick employing about 6000 women workers. About 200 workers staying in one hostel provided by company fell ill after taking  food on 15.12.2021 and were hospitalized. While many workers were returned after treatment, whereabouts of few workers were not known. Annoyed over the issue workers spontaneously started protesting. Since there was no proper response either from company administration or from Government they squatted en mass at the Chennai – Bangalore highway  on 17.12.2021  disrupting traffic. Then only District Collector and other Police officials came to the spot to pacify workers. Workers were anxious to know the condition of their colleagues and administration was unable to disperse them. In the meantime Trade union leaders and worker vanguards arrived in support of their demands. Government instead of arresting the Foxconn top officials for the mayhem, roughed up women workers and arrested union leaders, including CITU District secretary. DMK Government was flayed for its police action by trade unions and left parties including its electoral allies.  Workers dispersed only after knowing through video call that the  condition of admitted workers is stable.

AICCTU strongly condemns the Police action. Foxconn is known for their anti worker attitude through out its worldwide operations, and this incident is no exception.

To avoid snowballing of the protest to much larger scale, Government announced that all workers are given 7 days paid leave. Also transportations are arranged by the Government to take them to their native places.

Foxcon is to be held accountable and its Top officials are to be arrested.

Release all those arrested, including trade union leaders and Ms.Vaishnavi, an Independent Journalist.

Government should release a medical report of all those affected by food poison.

Government should come out with the time bound report on the condition of working women's hostel.

A team consisting of representatives from Trade unions also should be permitted to inspect Foxconn factory comprehensively and give report to the Government.