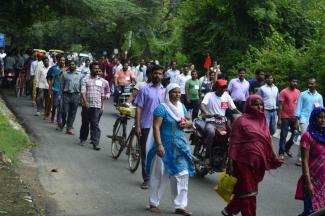 Jawaharlal Nehru University (JNU), like any other educational institutions, does not merely comprise of teachers and students, but also hundreds of workers who toil every day to keep the campus functioning. It is workers of the campus who keep the campus clean, run the mess in hostels, keep library and class rooms functional, maintain necessary services like electricity, keep the campus green and beautiful as well as make administrative work possible. Majority of these workers, now a days, are hired on contractual basis through private contractors. And it is the contractual workers of JNU who have been facing blatant violation of their legal rights by the JNU - contractor nexus.

Since the nationwide lockdown in 2020, the violation of workers’ rights by the JNU administration has assumed aggressive dimensions. Non-Payment of Wages, Threat, Caste Abuse and Retrenchment are the issues workers confront today.

More than 50% of mess workers of JNU were retrenched as soon as the lockdown was announced. These workers, many of whom are migrants from different states, were forced to go back home as they were suddenly thrown into a horrible situation of joblessness and hunger. Several others continued to stay back in Delhi paying the room rent, even when they didn’t have any income, with the hope that they would be taken back when the campus reopened. While, a full-fledged reopening of campus has still not been declared, many hostel messes started operating as the lockdown was rolled back in a phased manner. Some of the mess workers were called back to work in the hostels where mess facility had started. The JNU administration made these workers work for several months without payment in the name of recovering money that was paid during the first few months of lockdown. This is a blatantly illegal practice as workers were denied wages for work they had done for several months.

While the country was reeling under the death waves of Corona, it was the sanitation workers who worked with commitment to fight Corona without a day’s leave so as to keep the campus clean which was an unavoidable necessity to keep everyone else safe when staking their own life. But these workers who were at the most vulnerable situation of being infected by the deadly virus were not even given any basic safety equipments like gloves, mask or sanitiser by the contractor or by the JNU. The sanitation workers were forced to handle garbage, to clean toilets and dustbins without the most basic safety gears.

To top it all, the sanitation workers are being forced to work for several months together, without any payment. The non-payment of wages has been repeatedly occurring in JNU for the last two years. The lockdown has economically devastated the contractual workers. Non-payment of wages for months together has pushed the workers into a vicious cycle of indebtedness from money lenders with high interest rates. Despite repeated intimation by the workers and their union (All India General Kamgar Union, affiliated to AICCTU), the delay in payment continues.

Frustrated with the situation, the workers engaged in segregation of garbage went on a strike after duly issuing notice to JNU administration and well after submitting their demands. JNU administration that is guilty of repeated violation of workers’ rights responded by deducting wages for eight days invoking the clause ‘No work, no pay’.

The workers were threatened and abused with casteist slurs, by the representatives of Sudarshan Facilities Private Limited, the contractor, for joining the union and for strike after they ended it.

On 10th of November, the above said new contractor asked workers to submit their identity documents so as to make them appear as new recruits. In the same set of papers, something similar to an undertaking in the name of ‘Seva ki Sarte’ or ‘Conditions of Service’ was also attached. The so-called conditions of service stated that workers will never engage in any union activities or call for any strikes and workers were forced to sign. This is nothing but an unfair labour practice by the JNU and the contractor, When one of the workers, Mr Govind Kumar, pointed out the illegal nature of the conditions he was orally terminated from service while others, who are mostly illiterates, were forced to sign.

Is it a crime for a youth from Dalit community to be educated and be aware of the rights of workers? Is it a crime to make one’s own colleagues aware of the illegal nature of the papers and conditions of service being forced on them?

It is the JNU Administration and the contractor who are guilty of violating the legal rights of the contractual workers time and again.

Sanitation workers are still made to work without payment for months

No salary slips are given to workers

Legally mandated bonus is being denied for last three years

The order of Equal Pay for Equal Work given by the office of Labour Commissioner in 2018 has not been implemented by the JNU, in clear violation of law.

Unfair labour practices are being resorted to by the JNU admin and Govind Kumar is being punished for raising his voice against the injustice and illegal actions of the management.

Sanitation workers are being abused with casteist slurs for joining the union of their will and choice and for raising voice for their rights.

The All India General Kamgar Union has been raising their voice in every possible forum against the violation of rights of the workers. It is time that we extend our solidarity with the struggle of contractual workers of JNU. νν