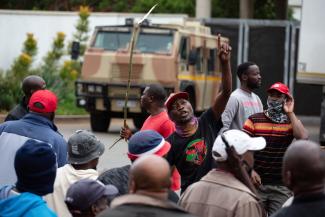 Further, the workers are demanding a wage increase of 10%, the unions are demanding that the government take over the company and run it with democratic participation of workers.

More than 5000 workers are participating in the strike that are going on at Clover factories in South African cities of Clayville, Durban, Gqeberha, Polokwane and Cape Town.

John Appolis, General Secreatry of GIWUSA said Clover told the unions three months ago that it intended to save R300 million on labour costs by retrenching 1 000 workers and introducing a six-day work week with compulsory work on public holidays. Clover also intended to lengthen the work week by making employees work a long 12 hour-day, instead of a nine-hour day, without overtime.

The workers are also demanded withdrawal of Milco SA, which is owned by the Israeli Central Bottling Company from Clover. Clover was purchased in 2019. FAWU and GIWUSA said CBC/Milco SA is “complicit in the human rights abuses and oppression of the Palestinian people” as the parent company operates in Israeli occupied Palestinian territories.

Amid the ongoing strike action, Clover management is trying to break the workers’ action by deployed armed private security guards and armored vehicles as an intimidating tactics. But the workers are stands firm their demands and have said that if Clover continues its intimidating actions, they will occupy the factories.νν

Hundreds of healthcare workers in Adelaide, South Australia organized protest action on December 14 protesting against unsafe working conditions which they argue put both patients and care-givers at risk. The protest was organized by United Workers Union (UWU) and essential workers from two of the city’s major hospitals, Royal Adelaide Hospital and Queen Elizabeth Hospital were involved.

The workers pointed that despite the workforce shortages, the Liberal Party government of State premier Steven Marshall is planning to cut down 2,000 jobs in the health sector in the next two-and-a-half years and the health system is being turned into a profit margin for a multinational corporation.νν

The teachers at the University of Bangui have embarked on a 21-day strike action in the Central African Republic (CAR) demanding pay rise and better working conditions, including staff vacations.

The current strike comes of two earlier protests that lasted for three and eight days. The strike action was initiated after no response form the government headed by Prime Minister Henri-Marie Dondra. νν

Sanitation Workers at Facebook HQ in UK Calls for Strike

Sanitation workers at Facebook's offices in central London (United Kingdom) have unanimously voted for strike to be organized on December 24. The call for strike follows months of protests against excessive workloads imposed by their contactor, Churchill Cleaning, and the dismissal of union representative Guillermo Camacho last month.

The workers said that with increase in workload in May, operatives have reported a range of health and safety issues including general exhaustion, back pain, the regular use of painkillers, elevated stress levels, and, in one case, internal bleeding.  According to reports, prior to the pandemic, the 22 cleaners, who work eight hour days and earn £10.85 an hour were required to clean five of the office. But after a Facebook office expansion, they are now required to clean 14 floors with no pay increase or additional workers to help.

Camacho, an elected union representative and a cleaner at Facebook's Brock Street office was removed from his job after he organized protests in July this year against the harsh working conditions in which sanitation workers are forced to work. νν