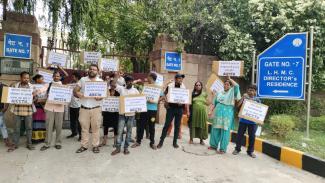 Sanitation workers, the core constituent of the workforce that runs every institute, are most often the ones whose legal and social rights are violated and overlooked by the powers that be. Particularly, institutions like hospitals and nursing homes will, effectively, stop functioning without the most primary service provided by the sanitation workers. When the country was experiencing the deadly effects of the Covid 19, it is the sanitation workers, alongwith the health staff of the hospitals, who saved people from the dangerous disease through their dedicated services. Yet, these are the workers who are being dispensed off, in complete violation of laws and procedures, from several hospitals all over the country. We still remember how, in the peak of the Covid wave, the Modi-led central government enacted a drama of ‘ornamental rhetoric’ and ‘respects’ to the frontline workers for their yeoman services in saving the nation from the disease. It is indeed ironic that the very same central government is violating the Delhi High Court order to reinstate the sanitation workers of Delhi hospitals.

After a spate of retrenchments of contractual medical staff, massive retrenchment of sanitation workers have taken place in various Delhi hospitals. In the hospital complex of LHMC alone, including Lady Harding Medical College, Sucheta Kripalani Hospital and Kalawati Saran Children’s Hospital, around 357 contractual sanitation workers were illegally retrenched. These workers have rendered services to the institute for more than a decade and were ruthlessly retrenched in an arbitrary and illegal manner.

Union Busting and Victimisation of Workers

The recent retrenchment of the sanitation workers should be seen in the context of their protracted struggle for rights and union formation. Most of the retrenched sanitation workers have been working in the institute for many years. In fact, several of them have been working for more than a decade. They formed their union Kalawati Saran Contract Karamchari Union (affiliated to AICCTU) in December 2017. In 2019, more than 100 workers of Kalawati Saran Children’s Hospital started their struggle for implementation of legal minimum wages. After several rounds of litigation, these workers got Rs 1.3 crores as arrears of their unpaid wages. Subsequently, they also succeeded in enforcing the central government’s rate of minimum wages from June 2021. The workers are relentlessly fighting a legal and political battle for implementation of EPF and ESI, equal pay for equal work under CLARA , 1970 and for regularization of their services. While their petitions are still subjudice in various courts, the hospital administration has retrenched them in April 2022.

Since then, the workers have been fighting an energetic battle against the illegal and arbitrary retrenchments. They have been holding protest sit-ins at the gate of LHMC for almost a month now.   In the meantime, through the intervention of the union, the Delhi HC ordered reinstatement of the workers with pending cases before it.

Hence, it is fully clear that the responsibility of compliance lies on the hospital management run by the government which is the principal employer in this case. It is utterly shameful that even after the direction of Delhi HC, the workers have not been reinstated yet. The central government as well as the hospital administration are clearly violating the legal rights of sanitation workers. Even to implement a HC order in a government institution, the workers had to go for another round of protests, face police crackdown and day long detentions, etc., to demand their legal right of reinstatement. Very recently, on 24 June, one of the sanitation workers and an activist of AICCTU, Comrade Nitin, was physically assaulted by a police personnel of Mandir Marg police station. The AICCTU has filed a complaint and is committed to ensure that the police personnel is punished for assaulting a Dalit sanitation worker.

The hospital administration has most shamelessly replied to the demand for implementation of the Delhi HC order that they have communicated the order to the service provider. This is nothing but an attempt to evade its responsibility as the principal employer. The AICCTU is determined to carry forward the battle until workers are reinstated.

The struggle of the sanitation workers of LHMC hospital complex in Delhi resonates in every other places of the city and also of the country. Forced into a caste ordained profession, the sanitation workers are being systematically denied their rights. The sham contract system has made the situation worse. It is only through forming unions and building up a collective resistance against the inhuman and systematic exploitation, the fight for dignity and rights of sanitation workers can be taken to its logical conclusion.