‘Unauthorised Colonies’ of Delhi and the Vindictive Bulldozer 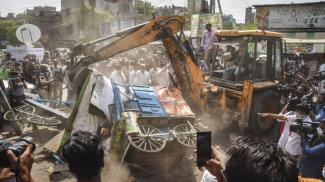 The history of unauthorized housing in Delhi can be traced back to the planning failures of the state, particularly the Delhi Development Authority (DDA), which has through successive master plans failed in its goal to build enough lower and middle income housing in the city. Unauthorised colonies (UAC) are deemed as such as they are built on land which is neither zoned for residential purposes nor earmarked for other development work in the city’s masterplan. Here, it is important to note that the Delhi has both elite and poor unauthorised colonies - they range from the bungalows of Sainik Farms to the slums of poor like Jahangirpuri and to the ghettoized Muslims of the Shaheen Bagh. This piece will focus on the spatial injustice faced by the low-income residents of the Delhi’s unauthorised colonies and not the elite informality that very much exists in the city - as the elite have historically escaped persecution through evictions in Delhi.

It is a historical fact that the DDA never built enough low-income housing for working class citizens of Delhi. To address this historical lacuna of housing and left with no or little choice, the working-class citizens have been left to “auto construct” the city with their own labour and money to fulfill their basic housing needs. The state, instead of rewarding this labour and recognising its own shortcomings, has always viewed these housing typologies as illegitimate and using this language of the law, has sought to demolish these human settlements time and again. This is proved by the fact that in the past decade, the DDA has demolished 7000 more homes than it has built.

According to statistics presented in the India Housing Report by the Center of Policy Research, approximately 50 Lakh citizens or roughly 30% of Delhi’s population lives in these unauthorized colonies. These unauthorized dwellings lack basic services and amenities ranging from poor and unsafe physical infrastructure, to lack of sanitation and water facilities and lack of public spaces. This deliberate withholding of basic services by the state has only decreased the viability of these residential colonies.  The threat of evictions is a real and constant fear in the lives of so many of Delhi’s residents. There are other legal roadblocks in the UACs - the owners of the houses cannot get loans from banks by mortgaging their properties and neither can prospective house owners get loans to buy cheaper houses for themselves and their families. This has only exacerbated the housing crisis in Delhi.

The state, instead of finding a resolution to the severe shortages of affordable and viable housing for all citizens, has weaponized the so-called illegality of these areas and swung between offering authorisation to the colonies as an election tactic and / or carrying out demolition drives in these areas to create an image of being “tough on violations”. Regularizing Delhi’s 1639 unauthorised colonies has been a recurring issue in Delhi’s assembly elections for many years now. The latest round of this was seen in the Delhi 2020 elections when the BJP rolled out the Pradhan Mantri - Unauthorised Colonies in Delhi Awas Yojana. In short, PM-UDAY to confer legal land titles and provide services to Delhi’s 1700 odd UACs. Many researchers and housing rights activists have pointed out the gaps in this scheme which looks at all UAC housing in a homogenous manner and its complex and online application process means that many residents do not apply for authorisation under the scheme.

Also, it is important to say that housing rights cannot be viewed in a silo and are in fact deeply connected to people’s livelihoods. As seen in the latest spectacle of brutish state power in  Jahangirpuri, not only were people’s houses demolished by the bulldozers but also their livelihoods - from corner juice shops and local grocery stores to street vendors who sit and sell wares on the footpaths. Therefore, we must recognise that Delhi (like every other Indian city) is a city of informal livelihoods and informal housing. To declare over 50 lakh citizens as unauthorized or illegal, the state only highlights its own deliberate failures to plan an equal and just city.