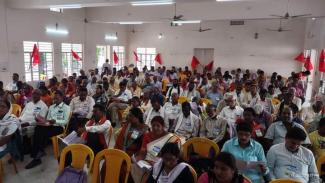 ‘Halt Price Rise, Give Fair Wages, Ensure Regular Jobs’- these were the central slogans of the 10th Bihar State Conference of AICCTU held on 16th October, 2022 at Hajipur in Vaishali district. The conference was held at a time when, on the one hand,  all existing rights of the working class of the country are being done away with the implementation of the four labour codes and on the other, communal hatred is being spread relentlessly to divide the people of the country.

Comrade Rajiv Dimri, National General Secretary of AICCTU inaugurated the conference. In his inaugural speech, he discussed about the present political scenario in the country at length. He said that the working class in India is going through most difficult times today. To counter this offense, our preparation and organisational strength also need to be unprecedented.

He said that under the present regime, the working class of India is facing multi faceted attack. From demonetisation to destruction of rights and silencing- the working class is at the receiving end of it all. Today, the working class is faced with the task of challenging the corporate interest led all round privatisation on the one hand and the divisive communal politics of the Modi regime on the other.

In the delegate session of the conference, Comrade RN Thakur, the General Secretary of Bihar AICCTU presented his report on behalf of the outgoing committee. The delegates presented their views on the report and gave several important suggestions. The report of the conference was passed after accepting relevant proposal of changes.

The conference adopted the following tasks-