Demanding Justice for Invisibilized Mine Workers of Ballari 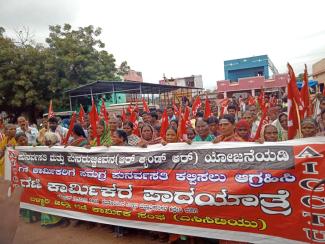 Shantamma worked for 30 years in the mines of Sandur, Ballari district in Karnataka – from earning a mere Rs. 50/- a month. Her children were born in the mines and grew up there. In 2011, she was thrown out of employment, and not paid a single rupee as compensation. Today, she works as an agricultural worker earning a mere Rs. 100/- a day when there is work, and with no earnings whatsoever when there is no work.

Umesh suffered serious damage to his eyesight and his respiratory system due to his work in the mines. He was forced to spend lakhs for his medical treatment. After being thrown out of employment, he was unable to find any job. His sons were forced to discontinue their studies and had to start working to sustain the family.

Amaresh was born and grew up in the mines at Ballari. His mother, a mine-worker too, had to take care of the entire family with Rs. 200 a week. The school he studied in was over 20 kms away, and there was no transportation available. Poverty, lack of transport made him give up school mid-way, and he became a helper in the mines.

Shantamma, Amaresh, Umesh and his sons came together with thousands of other mine-workers from 11th to 13th October for a padayatre from Sandur to Ballari demanding compensation for the mine workers of Ballari who had lost their employment when the mines were closed in 2011. Their struggle of over a decade is for their rightful share.

Exploitative Conditions of Work of Mine-Workers

As of 2011, Ballari district had 148 mineral leases covering an extent of 10,868.44 hectares and employing more than 25,000 mine workers directly. The rampant illegal mining since the 2000s came to light with the report of the then Karnataka Lokayukta, Justice Santosh Hegde and culminating in the Supreme Court directing the closure of all mines in Ballari in September 2011. The extent of illegal mining, the huge amassing of wealth, especially by the Reddy brothers were written about. But, what was invisibilized was the tens of thousands of workers whose labour was exploited for decades in the mines and who found themselves without any employment or compensation overnight.

In July 2011, with the orders of the Supreme Court, more than 25,000 workers were thrown to the streets. The mine owners used the pretext of the Supreme Court orders to further deny the workers their statutory rights pertaining to dismissal, retrenchment and compensation. While the mine-owners had made raging profits between 2003 to 2011, the workers, who had not been paid even minimum wages were thrown to the streets all of a sudden without any recourse, and denied any statutory process and benefits that accrue under law. The workers who were primarily from the neighbouring villages were largely from Dalit, minority and other vulnerable communities, with a large number of the workers being women. With the closure of the mines, the workers and their entire families, numbering more than 1 lakh people, including young children and senior citizens, were left with no source of livelihood and nothing to fall back upon.

The condition of the mine workers, from the beginning has been highly exploitative - not paid minimum wages, no basic facilities, no safety equipment, etc. It was through the exploitation of the workers that the mine-owners made huge profits. Any attempt at unionizing resulted in immediate termination of employment and even threats to life.

The Report of the Karnataka Lokayukta on the allegations of illegal mining activities in Ballari found that there was a complete collapse of the administrative and governance system, and found that “…it is observed that due to a big margin of profit in this illegal trade a mafia type of operation have started with the full connivance and support of Politicians, Officials of the Department of Police, RTO, Mines, Forest, Revenue, Commercial Taxes, KSPCB, Labour, Weight and Measurement department and others.”

Exploited by the Mining Companies, Ignored by the State

While on the one hand, the mining companies who have built their profits on the sweat and exploitation of these workers have not provided them with any compensation. On the other hand, the government has completely neglected these workers, and have not taken any steps to ensure that the mine workers complied with the law while denying them employment or taking any steps towards their rehabilitation. While steps are being taken for the rehabilitation of the environment, these workers and their families, who are thrown to the streets have been completely ignored.

In fact, several of these mines have restarted operations while others are now being auctioned and there are employment opportunities in the same. However, these illegally retrenched workers whose rights were grossly violated when the mines were operational and then closed, are even being denied their statutory right to ‘first right under law’ to re-employment. Instead new persons, especially migrant workers from other states, are being employed through an illegal system of labour contracts and sub-contracts. Thus, even though the mining work has restarted, the mine-workers who had lost their employment are not being given employment, in complete violation of the law.

Meanwhile, the Supreme Court in the case related to illegal mining in Samaj Parivartana Samudaya vs. State of Karnataka directed the State of Karnataka to draw up a Comprehensive Environment Plan for Mining Impact Zone (CEPMIZ) to look at ameliorative and mitigative measure for socio-economic development and eco-restoration in the mining impacted regions of Ballari, Tumakuru and Chitradurga districts. Through the orders of the Supreme Court, an amount of Rs. 19,443 crore were collected as fines. However, the plan fails to acknowledge the suffering of the workers and ensure a comprehensive plan for the rehabilitation of the workers.

Padayatra to Demand a Comprehensive Rehabilitation Plan for Workers

The Bellary Zilla Gani Karmikara Sangha, affiliated to the AICCTU, undertook a Padyatra of 70 kms over three days from Sandur to Ballari from October 11th to 13th. The padayatre was inaugurated by Social Activist Medha Patkar and social activist and Kannada cine-actor, Chetan Ahimsa.

In her inaugural address, Medha Patkar noted the importance of the padayatre, which was for livelihood, equal share, for change and for justice. She spoke of the need for the working class and the farmers’ struggle to come together to fight against the pro-corporate anti-people government that is looking to privatize ‘jal, jangal, zameen’, and the need to show that India is built by the farmers and workers. Stressing on the need to fight the communal agenda of the government, she said that we would not allow the people to be divided on the grounds of religion or caste. The Government is saying that they will only give minimum to the people – minimum wages, minimum support price, but we will not accept this – we want our equal share, she said. Our fight is for what is rightfully ours, our fight is to protect the core values of the Constitution, she declared.

Chetan Ahimsa spoke of how struggle is the only way for justice, and the manner in which the farmers’ struggle had compelled the Government to withdraw the anti-farmer laws. He declared his complete support for the mineworkers and their demands.

Thousands of workers started the padayatre from Sandur highlighting that the Rs. 19,443 crore that was collected as fines was all a product of their labour and demanding their rightful share in the same. Women, children, senior citizens were part of the padayatre that went through several villages highlighting the demands of the workers, with the residents of the villages also assuring complete support to the struggle.

After 70 kms, the padayatre culminated in a protest outside the office of the Deputy Commissioner, Ballari on October 13th. The workers were assured that their concerns would be looked into and the officials agreed that it was necessary to have a special rehabilitation plan for workers. A meeting was set up to discuss the special rehabilitation plan proposed by the workers under the chairmanship of the Ballari Deputy Commissioner.

The rights of workers can no longer be ignored and it is necessary that the Government immediately steps in and set right the historical injustice that has been done to the mine-workers. The struggle of the mine-workers of Ballari is one for justice, dignified life and equal share.