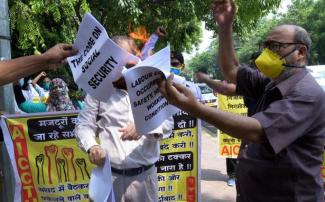 For several years, the Union Government has been pushing through deregulatory labour reforms to promote ‘ease of doing businesses’ and economic growth. Since labour is a subject that both Centre and States may legislate upon, the reforms have been implemented by States based on the Union’s scheme across the country at different times. Ultimately, the scheme of ‘reform’ is made clear in the four labour codes that seek to replace existing labour legislation and has been passed in parliament.

In August 2021, the V.V.Giri National Labour Institute and the Indian Institute of Public Administration came out with an Interim Report titled ‘Impact Assessment Study of the Labour Reforms undertaken by the States’. The Report looks at primary and secondary data pertaining to select states to draw conclusions regarding the impact of four legislative reforms and four administrative reforms. It purportedly seeks to look at the impact of 4 legislative changes and 4 administrative changes in six select states. The legislative reforms include increase in thresholds for applicability under three laws, being the Industrial Dispute Act (1947) [“ID Act”], Factories Act (1948) and Contract Labour (Regulation and Abolition) Act, 1970 [CLRAA] as well the introduction of Fixed Term Employment. The administrative reforms include Self-Certification, Single window clearance system, Transparent Inspection system, and Online Filing.

A close reading of the report shows that authors have engaged in selective picking and choosing of data to come to unsound and unwarranted conclusions. The fact that the primary data has been drawn only from employers’ associations is a clear indication of the unsoundness of the data to draw conclusions. All the existing studies relating to negative impacts of de-regulation have been excluded from the table of ‘Results of Important Studies on Labour Reforms’ leading to a false impression that the studies are uniformly in favour of deregulation.

The report looks at employment trends during two periods – the first period (2004-05 to 2011-12) and the second period (2011-12 to 2018-19) to conclude that there have been increases in overall employment in the country. Importantly, absolutely no link has been made to the labour reforms in this section and the trends perceived to exist are not even claimed to be attributable to the labour reforms. The report suffers from a number of flaws, most importantly the use of absolute numbers conceals more than it reveals. It also ignores important data about increasing number of unemployed persons in the same secondary data that is being referred to. It also tries to highlight a transition towards formalization of employment in a flawed manner.

Pertinently, the increase in jobs in the formal sector is equal, and even higher in states such as Tamil Nadu, which have not implemented the reforms, so no conclusion can be drawn on the impact of the reforms on the perceived increase in formal employment.

The Report also tries to highlight a shift in distribution towards larger plant size. However, no connection has been made with the labour reforms. In fact, it would be a logical fallacy to suggest that the legislative changes exemption smaller enterprises from the ambit of regulation could increase the number of large establishments that continue to be regulated!

The report attempts to assess the impact of the labour reforms through a Difference-in-differences [DID] analysis to test changes in states where the reforms have been amended as opposed to states where they have not been. At the outset, it may be noted that the analysis is limited to the legislative changes and not the administrative changes. Hence the impact assessment of administrative changes is solely through employer association data in a subsequent section. Even in this section, the analysis fails to make out any substantive indications of improvement after the labour reforms.

Though the analysis attempts to introduce control variables to account for the differences in the industry, State and year, there remains serious flaws in the analysis. Taking two comparisons as examples, we see the following:

The report concludes that there is no significant increase in employment outcomes in the post amendment period as compared with the pre amendment period. Even in the analysis, the base year was taken as 2013, with the assumption that amendments were made in 2014-15. In fact, FTE was affected in 2006, so no conclusions on FTE may be drawn from this comparison.

Here, the base year was taken as 2014-15 and analysis was conducted till 2017-2018. However, Andhra Pradesh only implemented FTE in 2018 so no conclusions on FTE may be drawn from this comparison.

As already discussed, the only primary data analyzed in the interim report is the data / opinions provided by four employer associations, which naturally embrace the changes. However, the reasoning adopted by the employers is very revealing in terms of the adverse impact on the workers. For example, merits of the amendment in threshold in the CLRAA according to these associations include flexibility in maintaining efficiency and productivity, reduction in long-term labour costs and shorter hiring process and ease of separation, whereas the amendments demerit the unavailability of skilled contractual workforce on demand and need for training every time the contract workers get replaced. Workers are reduced to their mere labour potential with no thought to their lives or security.

A convoluted argument is made that contractualisation of workforce effectively amounts to increasing formalization! The reasoning is that they are formalized under the contractors, which leads to improvement in the employment quality as such workers are offered better working hours and working conditions and social security. Effectively, the establishments are being enabled in contracting out of liabilities towards workers despite taking their sweat and blood.

Notably, barring one association, all others agreed that reform in the CLRAA has encouraged engagement of more contract labourers. However, the authors of the report do not analyse whether this is a positive or negative step that ought to be encouraged by the State – though in a different part it had been argued that the shift towards directly employed workers was a welcome development given the increasing contractualisation of the workforce.

In respect of FTE, one of the associations reported that as many as 50 per cent of all new jobs are given by FTEs for short periods extending up to one year. Only 20% of such jobs are renewed.

The labour law reforms essentially push workers into informality and dilutes the rights of workers in small industries. However, the study concludes that “the impact of the four major legislative reforms and the four major administrative reforms have had their own significant positive impact on different sectors of the industry and businesses ecosystems in terms of ease of doing business; employment generation, especially in the formal sector; attracting new enterprises/start-ups; attracting investments; increase in size of establishments; according social security benefits to employees; growth of certain labour intensive sector like textile, apparel and leather and finally on the overall economy.”

This is simply not a conclusion that can be drawn from the material in the report! Disaggregating, this overbroad conclusion finds positive impact in terms of seven aspects, all of which are deeply problematic.