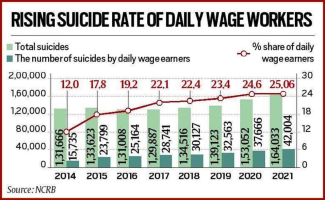 The latest report by National Crime Records Bureau (NCRB) on Accidental Deaths and Suicides in India –2021 has been made available just a few days back. Hidden among the mass of data and tables and charts is a stark indication about the life – and death – of the daily wage worker. Of the total of 1,64,033 suicides, 42,004 suicides were by daily wage workers - 1 in 4 persons committing suicide are daily wage workers.

It is also worth noting that a very large number of workers working under insecure conditions are from historically oppressed communities. The Periodic Labour Force Survey for 2018-19 found that the magnitude of informal workers was highest among those from the Dalit Community at about 84 per cent. The working conditions of daily wage workers – lack of job security, lack of wage security, lack of any form of social security and the long and arduous working hours create an environment where they are constantly immersed in economic uncertainty and social support of any kind.

In most cases they are denied even minimum wages and labour laws being constantly and completely violated. Many of them have worked for several decades performing the same work in the same place but are denied permanency and designated as ‘daily wage’ workers. This is most common among workers working in the “D-Group” - usually caste ordained occupations performed traditionally by Dalits in government and urban local bodies. With almost no access to institutionalized credit systems, they are compelled to borrow under usurious interest rates and consequently falling into debt traps.

The unplanned lockdown in 2020 and 2021 highlighted the vulnerable conditions under which daily wage workers work with absolutely no social security. The lockdown immensely worsened their situation – with a steep decline in wages, wage theft and loss of jobs.

This condition of daily wage workers is a result of the conscious neo-liberal policies of the State attempting to keep workers disorganized. The steep rise in the number of suicides among daily wages workers from 2014 can be directly correlated to the anti-worker policies brought in by the Government and this includes the regressive changes in labour laws and the policies pushing for “ease of doing business” at the cost of the worker. The NCRB data showing the steady increase in the number of suicides by daily wages workers from 2014 is a clear indicator of a failing system. Not only is the Government failing to even recognize this and find ways of alleviating the problem but has exacerbated it by the introduction of the four new labour codes that effectively destroy the hard-won rights of the working class and will only result in worsening the conditions of the daily wages workers. The Codes not only pushes more people from the organized sector into the unorganized sector and into conditions of great insecurity, it also takes away even the minimal rights that daily wage workers are entitled to.

The suicides of daily wages workers has to be recognized as a clear consequence of institutional violence -State policies that reduce workers to “cheap labour” to suit “ease of doing business” policies.