The Wage Code - 2019 and The Draft Code on Wages (Central) Rules, 2020: An Assault on the Fundamental Right to Minimum Wages 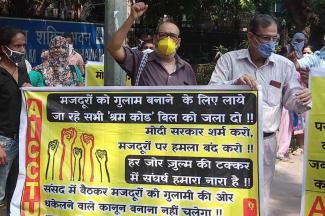 The Wages Code, 2019 and the Draft Code on Wages (Central) Rules, 2020 puts forward a direct assault on the most fundamental rights of workers. One of these is the right of workers to minimum wages, which this article concentrates on.

The Constitution in Article 43 speaks of a “living wage” for workers and provides that the State shall endeavor to secure, by suitable legislation or economic organization or in any other way, to all workers - agricultural, industrial or otherwise - a living wage and better conditions of work to ensuring a decent standard of life and full enjoyment of leisure and social and cultural opportunities. Further, Article 39 provides that the State shall direct its policy towards securing – for its citizens, men and women equally - the right to an adequate means of livelihood and that the operation of the economic system should not result in the concentration of wealth and means of production to the common detriment.

While, the dream of the Constitution is one of a living wage, unfortunately, the law hitherto, the Minimum Wages Act, 1948 only provided for a “minimum wage” to the workers. However, with the coming of the Wage Code, 2019 and the Draft Rules being proposed by the Central Government, even this minimum wage is being denied.

With the growth and development in society, the wages recognized as minimum wages is required to be increased and its various components is to be developed. In fact, the idea of minimum wage is to grow into a living wage, which recognizes workers as full human beings and provides enough to ensure their development and participation as full citizens of the country. It is only when the basic needs of workers are met, they would be able to spare time away from the workplace for the building up of citizenship and to participate as citizens.

Less Than Minimum Wage is Nothing But a Forced Labour

The Supreme Court in People's Union For Civil Liberties vs Union Of India & Others [AIR 1982 SC 1473], held that where a person provides labour or services to another for remuneration which is less than the minimum wage, the labour or service provided by him clearly falls within the scope and ambit of the words "forced labour" prohibited under Article 23. What we see with the bringing in of the Code on Wages, 2019 and the proposed Draft Code on Wages (Central) Rules, 2020 is the complete erosion of this most basic right to minimum wages and a step by the Government that pushes all workers into a condition of forced labour.

Manner of calculating the minimum rate of wages as per the Rules that would result in workers working under conditions of forced labour.

Rule 3 of the Draft Code on Wages (Central) Rules, 2020 provides for the manner of calculations of minimum wages and provides the following criteria:

What we see with the coming of the Wages Code, 2019 and the Draft Code on Wages (Central) Rules, 2020 is thus a complete destruction of the most basic rights of the working class, and a far cry to the dreams of the Constitution of an equal and just society.