No to GPS Bands for sanitation Workers in Ranchi 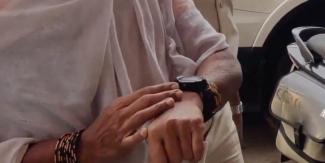 (A memorandum submitted by AICCTU to the Ranchi Municipal Corporation)

This move of the Municipal Corporation is in blatant violation of the rights of workers and are nothing but modern chains of slavery. It is degrading and an assault on the workers' dignity and blatantly casteist, especially since sanitation workers are from mostly Dalit, Adivasi and other oppressed sections of society. Do note that reports reveal that in few towns and cities where GPS tracking of sanitation workers has been attempted, workers have complained that it has caused them grave physical and mental health problems.

Of course, this imposition is only on sanitation workers, which betrays the casteist and classist intentions behind the same. RMC intends to create an illegal and obnoxious level of hierarchy where higher officials, sitting in their AC offices, can function in the most unaccountable manner, and yet demand the right to monitor the every movement of workers below them.

This amounts to chilling surveillance slavery of sanitation workers in forcing them to wear GPS bands with no regard to ethics or their right to privacy. This intrusive surveillance systems is being implemented unilaterally and with no legal or scientific basis.

The sanitation workers suffer from wage and job insecurity, irregular salaries, lack of safety wear and decent working conditions. We demand that the RMC ensure that all these fundamental issues are dealt with immediately. RMC continues with the contract system, which is illegal and hence we demand that the contract system is abolished and the workers are brought on the direct rolls of the RMC. Instead of addressing these basic issues, RMC seeks to introduce this casteist and classist policy of GPS bands.

Furthermore, Ranchi is reeling under a heatwave and the safaikarmacharis are being forced to work in the searing heat without any steps from the RMC to address the adverse impact of working in such heat. The National Disaster Management Authority (NDMA) has mandated the steps to be taken to “minimise the impact during the heat wave and to prevent serious ailment or death because of heat stroke”, including:

• Drink sufficient water and as often as possible, even if not thirsty

• Wear lightweight, light-coloured, loose, and porous cotton clothes. Use protective goggles, umbrella/hat, shoes or chappals while going out in sun.

• Avoid strenuous activities when the outside temperature is high. Avoid working outside between 12 noon and 3 p.m.

We additionally demand that the RMC immediately limit the working day to 12.00 noon and provide the abovementioned facilities including light-coloured uniforms, protective gear, ORS, etc. free of cost to sanitation workers.