Say a Loud No to Bank Privatisation 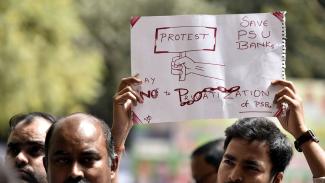 The winter session of parliament is beginning on November 29. This session is likely to take up the key financial issue of privatisation of banks. During 2021-22 budget, the Finance Minister Nirmala Sitharaman had announced the privatisation of two nationalised banks and one general insurance company. Accordingly, the General Insurance Business (Nationalisation) Amendment Bill, 2021, was passed in the monsoon session, though the particular insurance company to be privatised had not been identified. Similarly, in this session, the Banking Regulation Act, 1949, and the Banking Companies (Acquisition and Transfer of Undertakings) Act, 1970 and 1980, are slated to be taken up for amendment. This will pave the way for privatisation of banks. Lot of speculation is going on as to which two banks will be privatised. Names of four banks are doing the rounds -Central Bank, Indian Overseas Bank, Bank of India and Bank of Maharashtra, but according to reliable sources, while the amendments are likely to be placed on the table, identification of particular banks may be taken up later.

For quite some time the central government is on a privatisation and disinvestment spree. Its motto is : Government has no business to be in business. In February, Prime Minister Narendra Modi had announced that the government intends to sell 100 public sector companies, which will fetch Rs. 2.5 lakhs crores. In future, government will have minimum presence in only four sectors -defence and atomic energy, telecom and communications, oil, coal and similar fuels and insurance, banking and other financial services. All the rest will be privatised or sold. He even went on to say that if buyers were not available, then companies/businesses will be summarily closed down. The government is ruthless; it doesn’t care about the future and welfare of the employees of these PSUs.

Let’s focus on bank privatisation in particular. For the government,  particularly since 2014, public sector banks have been a major concern. They regularly single out the mammoth amount of Non Performing Assets (Rs. 6,17,000 lakhs crores as of March 2021) in these banks and contend that these banks are a drain on the nation’s economy. They say public banks are inefficient, the staff are casual and even allege that many of them are corrupt. Hence, they argue that these are no longer viable and most of them are beyond redemption.

The fact is the present mess of NPAs has been created by high officials in banks and the government and some corrupt ministers. Let this be known that advances above Rs. 100 crores is mostly processed and sanctioned by the highest officials, and the staff and officers have hardly any role in it. The highest bank officials are nominated by the government, who dole out huge loans to their cronies which after a certain period of time invariably turn bad. It is this unholy nexus which is squarely responsible for the huge amount of bad loans. Bank unions, particularly AIBEA (All India Bank Employees Association), have pointed this out time and again but to no avail. Years ago, AIBEA had drawn up a list of 2426 companies who owe the banks a whopping amount of Rs. 1.47 lakh crores. Even after repeated demands to apprehend these defaulters the government has done nothing.

The government contends that it has infused Rs. 4.50 lakh crores of capital into the PSBs since 1994. The fact is that a bulk of this capital is periodically siphoned off to finance the lackeys and cronies of the highest officials. Now they have resurrected an old concept of ‘bad bank’ which had turned out to be a failure years ago. This has been done for a specific purpose. Government wants to privatise but nobody wants to buy a unit which has a baggage of bad loans. So, NPAs of banks are shifted to this bad bank, their balance sheets are cleared so that they become lucrative for potential bidders.

What will the bad bank do with this mammoth amount of bad debts? Usually they sell these assets at a much lower rate, quite similarly to what has happened in the case of Air India. There is also the ‘Insolvency and Bankruptcy Code’ which is used to bail out defaulters. Here we can examine the case of Videocon which had been a reputed brand selling electronic goods in the recent past. This company had a debt of Rs. 46,000 crores in the market, and unable or unwilling to repay, it declared itself insolvent. Its assets were sold to Vedanta for a paltry sum of Rs. 3,000 crores and rest of the debt was simply written off. This is the gist of how capital of PSBs is being looted rendering them sick.

From time to time, mandarins in the finance ministry have a brainwave and want to rectify this situation. They come up with the idea of creating big banks. They mourn that the SBI is the only entity among the 50 largest banks in the world; so they merge and consolidate some of the banks into larger ones. In the process, 27 PSBs are reduced to 12, causing immense hardship to the staff and the customers. Many bankers are forced into a situation where they have to opt for VRS, many are arbitrarily transferred. Computer software of different banks have to be matched which lead to hiccups going on for months, hampering customer service. This again enforces the popular narrative that bank staff are inefficient.

After this process has been done away with, they return to their pet theme of ‘privatisation’. For them privatisation is the panacea for all the ills that afflict the banking system, including the chronic problem of NPAs. How good or effective is privatisation? For this, we can cast a glance at the period before bank nationalisation in 1969, the heydays of private banks. In the period between 1935, when RBI was formed, to the year of independence, there have been 900 bank failures. From 1947 to 1969, 665 banks failed. Every bank failure was a catastrophe for the customers as many of them lost their entire deposits. After nationalization, 36 banks failed but they were rescued by existing PSBs. Many of us would surely remember how the failing United Industrial Bank was rescued by Allahabad bank in 1989; similarly, in 2004, Global Trust Bank was saved from collapse by its merger with the state-owned Oriental Bank of Commerce. Even in recent times it is the private banks which have been on the brink of collapse. When IDBI Bank and YES Bank were in crisis LIC and SBI rescued them by purchasing almost the majority of their shares. Laxmi Vilas Bank, almost a century old, was rescued by Development Bank of Singapore. In this way, the government cleverly turned an adverse situation into an opening for foreign capital in the banking industry. The promoters of Punjab and Maharashtra Co-operative Bank have been so profligate that it has been under the strict vigilance of RBI since 2019. Its customers have had to face enormous difficulties and some of them were driven to suicide.

So much for the efficiency of privatised banks. There is also a popular perception that customer service is better in private banks than in PSBs. Here accounts are usually opened with a minimum of Rs. 5ooo, which is beyond the means of 90% of Indian people. Hence, customer base of private banks is small and basically consist of well-to-do people. Private banks are reluctant to open branches in remote areas; they are reluctant to finance weaker sections of the people. In terms of implementing government schemes, they are way behind the PSBs. Take for instance the Jan Dhan or zero balance accounts, the performance of private banks is much poorer than that of state owned banks; while the PSBs and rural banks opened 40.48 crores accounts, private banks opened only 1.27 crores. Hence, the perception that private banks mean quality is merely a myth peddled by a miniscule section of the population.

Well, this is a government of the tycoons, the ultra-rich and so they push the privatisation agenda time and again. The bank unions are not sitting idle either. According to Shri Kamal Bhattacharya, veteran leader of AIBEA, the UFBU (United Forum of Bank Unions) has decided that as and when the Banking Amendment Bills are tabled in the parliament, unions will go on strike within the period of the winter session. Preparations are in full swing. Signature campaigns against privatisation have been carried out even during the Durga Puja festival. This is one battle which the bank staff and customers have to confront together, hand-in-hand, shoulder-to-shoulder. Long Live Workers-Customers Unity!