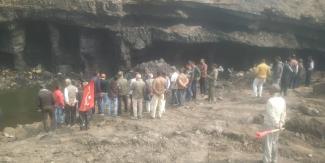 Nirsa, the coal capital of Dhanbad, bore witness to the deaths of a dozen women and men on 1st February, 2022, in a mining accident. CPI-ML General Secretary comrade Dipankar Bhattacharya, the state secretary Com. Manoj Bhakt and MCC (Marxist Coordination Committee) ex MLA Arup Chatterjee, visited the accident site of collieries at Nirsa on 3rd February along with several activists.

They collected accounts of the accident and associated developments. They also visited injured people in the hospital. Com. Dipankar Bhattacharya said that coal mining is the biggest sector in Jharkhand. But, privatization of public sector by the union government and the unjustified system of large-scale outsourcing has resulted in continuation of mining of coal in the closed and abandoned collieries and has turned the parallel, irregular or unsafe operations into a sector in itself.

Calling such mining operations as “illegal” only helps the police and administration to terrorise the people, workers and the families involved. It is not justified to call them illegal but for calling them as “Unsafe Mines”. No one else but the union and the state governments are responsible for this. The “Unsafe” mining is going on unabated in connivance with the nexus of police, coal mine administrations and politicians and thus making it no more “illegal”.

As it is happening unabated, year-long and in such a large scale and for decades together, *it is better to regularise such unsafe mines and the union government should be held responsible for such unsafe mines and their operations. It is better to streamline such parallel mining operations so as to streamline them and to provide safety and security to the workforce involved.* Bringing such mining operations under Coal India can help in streamlining the sector. He also said that the union government should be held responsible for all mining accidents, disasters and other issues in whatever category the mines belong to.

Comrade Dipankar Bhattacharya pointed out the paradox that officials denied any accident and death while accidents and deaths are the hard reality that keeps recurring and are an irrefutable fact. He demanded that the government and the higher officials of the Coal India should investigate the accident by instituting a high-level inquiry and to take action against the guilty responsible for the unfortunate incident. He also demanded a compensation of Rs 15 lakh each to the workers killed in the accident and also demanded providing better and free treatment to the injured people and sufficient compensation to them. He said that proper treatment arrangements should be made immediately.

AICCTU demands that the Modi-led BJP government should –

• Bring them under Coal India, streamline their operations and make them safer!

• Pay Rs 15 lakhs as compensation for the loss of lives and Rs 5 lakhs to the injured!