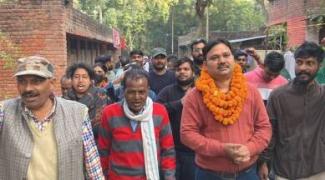 Sanitation workers form a key part of India’s workforce. Alongside construction workers, domestic workers, waste pickers, and others, they are part of an army of labour that build and maintain our towns and cities. Majority of them work on contract, with no social security. Most of them are Dalits. They live amid enormous precarity and lack of dignity.

JNU is known as a premier academic institute, but it took a series of powerful workers’ movements since 2008 to ensure minimum wage and social security benefits for the contract workers on campus. Till date, the workers are not paid regularly and arbitrarily transferred between departments in order to prevent collectivisation at worksites. Women workers, who usually finish their morning chores at home before coming for work, were recently given morning duty. Workers face regular harassment of this kind from the administration, ostensibly as retaliation against a strong student-workers’ united voice on campus.

Over the last few years, CPI-ML has added significantly to its presence in the Lado Sarai area over and above its presence in JNU. Participation in the CAA/NRC movement took our activists beyond the university campus, to the nooks and crannies of South Delhi, especially to the urban villages that dot the area. Later, students and trade union activists reached out to the working classes of the area through covid relief. Of course, there was already a regular interaction between students and JNU workers beyond the campus, in the workers’ neighbourhoods around the university. The election campaign grew organically out of this process.

The campaign team agreed to put up a worker leader who had been politically active inside JNU campus and beyond, as a candidate. After months of delay, the elections were announced on 4 November, and scheduled for 4 December. Parties and candidates were left with barely a month to file nominations and to campaign for the election. It was during the filing of nominations that the campaign team got a first-hand view of how the electoral system is tilted towards big parties and against the working poor.

For our working-class candidates with little personal resources, contesting elections in a meaningful manner was a challenge. The nomination forms asked for a range of paper documents. Many would consider these documents to be basic: date of birth certificate, bank details, documents certifying even minimal forms of property ownership (land, house, jewellery etc.) However, India’s poor is also document poor. This issue had come up sharply during the country-wide protests against the National Register of Citizens (NRC). It has also been highlighted in campaigns against making Aadhar mandatory.

There was a strong possibility that the Returning Officer would reject our nominations because of inadequate paperwork. This meant that the campaign team had to zero in on two candidates instead of one, and consequently find twenty proposers who were registered voters of the ward and had their voter identity cards with them. CPI-ML being a state recognized party in a state other than Delhi, each of its candidates required ten proposers.

If you are wondering why these requirements can prove to be rather difficult for contesting candidates, here are some pointers for you. One of our candidates – Ms. Urmila Chauhan –is a retrenched worker of JNU. She was retrenched for being a militant union leader. JNU has even declared her out of bounds, to prevent her from continuing to provide leadership to workers on campus. How could she update her passbook from the JNU branch of State Bank of India (SBI) in a time bound manner, when the guards stopped her whenever she tried to enter the campus?

As far as the twenty proposers are concerned, each had to fill a form and then travel in person to a designated office a few kilometres away to collect a Certified Voter Copy. Only then they became eligible to propose a candidate or contest the election. With contractors threatening to throw workers out of jobs for minimal absence, most workers wondered if they could risk this visit.

Finally, two people filed nominations – Ms. Chauhan and Mr. Jitender Kumar, another worker leader of JNU. Mr. Kumar, a Dalit, is a sanitation worker on contract. He was the party’s first choice candidate. We found a way to make sure that he did not miss duty even once during the nomination process and during the campaign. He joined the campaign after the duty hours. Yet, within a week of filing the nomination, the contractor under whom he worked – Rakshak– issued him a show cause notice for contesting the election.

The notice claimed that any involvement in elections went against Rakshak’s code of conduct which was binding on its employees. When pressurized to explain such a blatantly illegal and unconstitutional move, Rakshak failed to produce any pertinent clause in their code of conduct and indicated that the notice had been issued at the behest of the university administration. The notice meant that Mr. Kumar could be suspended form work within three days and eventually retrenched.

The campaign team immediately issued a response threatening legal action against Rakshak and appealed to the RO to take immediate action against the agency for going beyond their jurisdiction and challenging a nomination which had been approved by the RO. Notably, the model code of conduct issued by the Election Commission mandates a no-objection certificate from the employer if the candidate is employed by the government. No such requirements exist in case of private contractual employment. This intervention by the campaign team led to the prompt withdrawal of the show cause notice. Mr. Kumar was able to contest as a CPI-ML candidate, but a question was firmly planted in our minds: if it is so difficult for contract workers to participate in the election process as anything other than voters, are they mere vote banks?

Mr. Kumar’s campaign pitch highlighted the history of union activities in JNU and promised to extend it to other areas of Delhi, especially among sanitation and other municipal workers. Aam Aadmi Party has been promising to make sanitation workers permanent but has so far reneged on the promise. The campaign focussed on our union’s (All India Council of Trade Unions: AICCTU) track record of campaigning for workers’ rights, to emphasize the fact that we are more of an around the year fighting force and not a one-dimensional election focussed party.

In areas such as Kusumpur Pahari, where workers do not have access to tap water, sewer lines, and where residents have not been granted land rights despite living there for generations, we strongly supported these demands. In the process, we raised the need for a party which represents workers’ interests to claim their space within electoral politics. This brought us in direct conflict with the Aam Aadmi Party in working class localities, where there was already a significant anger against the ruling Bhartiya Janata Party (BJP) due to price rise, unemployment, and fall in living standards. There was also genuine concern about the possibilities of demolition of working-class colonies if the BJP were to be empowered again in the municipality. We highlighted the issue of slum demolition to emphasize on the need to vote out the BJP. Comrades from Dhobi Ghat (near Jamia Milia Islamia) whose houses were bulldozed last year and who are now with our union, joined the campaign in Kusumpur.

Our campaign focussed first of all, on the need to keep the BJP out. However, when the question of alternatives came up, we were able to highlight the limitations of the Aam Aadmi Party. The fact that our candidate was a sanitation worker, for whom the broom is an everyday reality and not a mere election symbol, struck a chord in sanitation workers’ colonies. We highlighted the fact that AAP had been silent on the bulldozing of houses and has not installed clean tap water in workers’ colonies. The regular visit of water tankers is an improvement indeed, but a local water mafia has grown around them causing much inconvenience to people.

Our team was quite energized by the positive reception our campaign received among the Dalits and working people in the ward. It was also encouraged by the students, teachers, and permanent workers of JNU. The reception was not fully reflected in the vote share. The use of money power and alcohol to influence voters was rampant. Voters also sensed that the Aam Aadmi Party (AAP) was a more “winnable” alternative to the BJP at present.

The election was still very important for us in terms of political outreach in the area. Our young activists also got a sense of the political terrain in Delhi. During the election campaign we felt a strong need to focus on area-based organizing alongside unionization of workers. Above all, we felt that a political space does exist for a Left-oriented democratic politics to emerge as an alternative to the BJP in urban and semi-urban areas of the country, if we can build a base among the working classes, Dalits, and women.