2022-The Year Gone By: Glimpses of Struggle of Labour against Capital- A National Overview 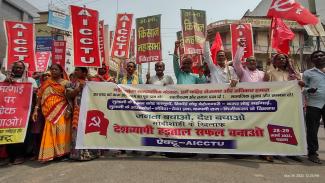 The Year After Covid

India started the year 2022 at a very low rank on the Human Development Index (HDI), released by the United Nations Development Program (UNDP). India was ranked 132 out of 191 countries and territories. This shows how poor the majority of our people are, and how badly the country needed economic policies that favoured the poor and the working classes.

Labour Codes, All Out Contractualisation and Sell Out of Public Resources: 2022 from the Ruling Class

With little significant improvement in standard of living, the year 2022 has been marked by thorough preparations for implementing the anti-worker labour codes. The Government of India organised a Labour Ministers’ conference at Tirupati on 25–26 August 2022 without any representatives of any central trade unions. The conference was virtually inaugurated by Prime Minister Narendra Modi.

The conference was based on four themes: 1. Integrating e-shram portal with others so as to make it a single portal for any social security scheme by the union and state governments. 2. Swasthya se Samriddhi for supposedly improving medical care and services through ESI hospitals run by State Governments and integration with PMJAY (Prime Minister Jan Arogya Yojana). 3. On framing rules under Labour Codes and modalities for its implementation. 4. Vision “Shramev Jayate@2047” or Vision 2047.

This was nothing but yet another step towards scripting modern day slavery, denying minimum wages, robbing job security, health, and social security, and preparing grounds for a renewed enslavement of women.

The Agneepath scheme, which contractualized army labour, shows that the government is ready to push through contractualisation even at the cost of national security.

The Modi government is considering gig and platform work, without an iota of any security, as the model of work for 2047 while the demand of trade unions and workers in the country is to provide legal protection to these emerging sections of workers.

Artificial Intelligence and Robotics can change not only the nature of work but also the lives of the people. No interference of the state in workers lives is nothing but a jungle raj of corporate capital, where workers would be pushed to survive at the mercy of capital. Unfortunately, this is the dream of our Prime Minister. And it came to the fore even more strongly in 2022.

Resistance of the Working Class

The year gone by has also witnessed protracted workers’ movement at the workplaces and beyond. The most inspiring of them was the energetic nationwide protest by the country’s job seeking youth against the devastating Agneepath scheme that has introduced all out contractualisation even in the army.

Among other sectors, under the banner of AICCTU, sanitation workers, construction workers, and sections of industrial workers have fought militant battles for their rights at the workplaces as well as for their right to the city. Teachers and other professionals facing retrenchment have also launched strikes demanding better pay and secure working conditions.

The National Council Meeting of AICCTU took place in July in Coimbatore. It resolved to intensify the struggle against the disastrous policies of the Modi regime. It decided to launch a country-wide campaign in the month of September 2022, which saw protests all over the country.

The nationwide campaign demanded the repeal of the four anti-labour codes and scrapping of the National Monetization Pipeline, in addition to protesting the escalating unemployment, skyrocketing price-rise, rampant privatization, contractualisation of work force, massive retrenchment, wage cut and dismantling of social security including welfare boards.

In November, a Scheme Workers’ Mahadharna happened in Delhi which witnessed a mobilization of 3000 people from all over the country. Subsequently, the workers’ issues were highlighted sharply in the Delhi Municipal elections, building on the yearlong organizing in Delhi’s working-class neighbourhoods around workers’ right to the city.

In Bangalore, the movement of the ITI workers continued, and the year ended with a workers’ movement against retrenchment breaking out in the Yazaki factory in Bangalore in which AICCTU is playing a key role.