Alternative Model of Struggle Against the Modi’s Vision 2047 for Labour? 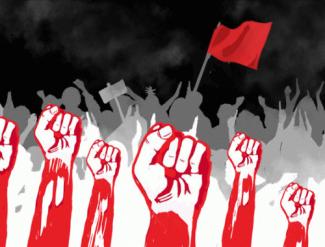 [A speech by Comrade Shankar V, the president of AICCTU at the inaugural session of the 42nd conference of AITUC at Alappuzha, Kerala on 17 December 2022]

Dear comrades of presidium, my colleagues of all central trade unions, the General Secretary of WFTU, the representative of ILO and other international guests and more importantly, all delegates who are not only delegates of the conference of AITUC but also the representatives of the working class of the country, I extend my revolutionary greetings to you all, on behalf of AICCTU, the All India Central Council of Trade Unions.

We are discussing about halting neo-liberal policies and anti-labour Codes but the Modi government is analysing the implications of the implementation of labour reforms. The so-called labour conference, without any labour representatives, but with state labour ministers and officials, held at Tirupati in August 2022, says that the impact of reforms is very positive in states where the reforms are partially in force. Neither the statistics nor practical experience displays anything to substantiate such an argument of fallacy.

The said analysis claims that the Codes will help in the formalisation of the industry. It is obvious that industry may get formalised if dominated by corporates while the workforce is completely informalised which is the norm of the day. When the Codes exempt industries employing less than 300 workers from adherence to labour laws, more than 70 percent will be out of the purview of any law. Hence, it is not formalisation but informalisation and extreme levels of exploitation are the motto of the Modi government. The government says that they are the “New Codes for a New India” but actually they are the “Corporate Codes for a Slave India” which are implemented by the rulers. They are not labour laws anymore.

Privatisation is in full swing now. The Modi government began the same even when people were reeling under Covid 19. As the bourgeoisie in India cannot purchase a huge and mammoth sector like railways, the same is being divided and handed over to Modi’s corporate friends. Tracks for Adanis trains for Ambanis and stations for Tatas – this is the formula being adopted. As it is easier to hand over government-owned, profit-making companies and corporations to the private, Mr Modi has also invented a new route of National Monetisation Pipeline (NMP) to hand over all infrastructures and wealth of the country like roads, minerals, and natural resources.

The concept of social security is turned topsy-turvy. The responsibility to provide social security to the toiling millions is not that of employers or the government but that of workers themselves. Social security is not a benefit for contributing to the generation of wealth of the country and of the employers through the blood and sweat of workers but it is contributory. The workers should pay out of their pocket and buy an insurance scheme from the government under the Codes. The amount of return depends on how much a worker is willing to part with. More the payment, the more the benefits.

Tirupati labour ministers conference has also made it very clear that the e-shram, which is supposed to be the portal for migrant workers’ data collection, will be turned into a single window agency for delivering social security to the workers. The inference is obvious that all sector-wise social security boards, including construction, beedi and other unorganised workers welfare boards and funds are bound to be dismantled. The fate of crores and crores of rupees lying with such welfare boards is not yet spelt out. The private fund managers are waiting on the wings to grab all the funds lying with welfare boards and throw them into the speculative financial market.

Trade union rights, particularly the right to strike is being snatched away. Right from introducing a cumbersome process of registering a union to the crooked procedure to go on a strike, every right is being snatched away. Earlier, at least, there was a penal provision to fine and jail employers for any major violation of applicable labour laws which was never really enforced anywhere across the country. Now, all employers are exempted from any penal provisions while clauses are introduced to penalise workers and unions for going on strike. The Codes say that workers can be fined Rs 10,000 for organising a strike and that the leaders may even be arrested for any irregularity in following the mindless procedures. Modi’s attack on workers in favour of the corporate bourgeoisie is comprehensive.

The Vision 2047 being proposed by Mr Modi is perceiving a work model of gig and platform workers where employer – employee relationship is much blurred. They are entitled only to social security insurance benefits and even the employer is not responsible for their social security. Other labour laws applicable for industrial workers are not applicable to them while the same has been applicable in several western countries. Vision 2047 claims that the present strength of 77 lakhs of gig and platform workers will be increased to 2.5 crores in 10 years and the same will be the model for the proposed world of work. This section of workers is not only denied several rights but also refused any decent wages or decent life. This is the model of employment, equivalent to self-employed (the pakora wallahs), being dreamt by the Modi government to get rid of unionisation and any decent life for workers.

Moreover, this kind of pattern further accentuates informalisation of employment, informalisation of work relations and lumpenisation of the workforce that is considered to be a hotbed (fertile ground) for the growth of anarchy and the politics of Hindutva. The kind of Vision 2047 perceived by Modi is only creating a vast army of the unemployed and unorganised workforce in order to enable an objective and inclusive growth of the politics of Hindutva. This is the most dangerous aspect of Mr Modi’s Vision 2047 for labour. Against the backdrop of growing corporatisation and informalisation, stringent laws are needed to streamline industrial relations to protect labour. On the contrary, Modi’s Vision 2047 only advocates informalisation and anarchy against streamlining the relationship.

The cruel incident of migrant workers walking thousands of kilometres during the Corona wave is still not erased from our memories. Only fifty percent or more of those migrants returned to their workplace while most of them are still longing for employment in their villages. Even the budget allocation for MNREGA is already slashed and the workers are languishing without employment. Unemployment has ballooned to disproportionate levels. Even those workers who returned to their workplace, despite joining the same job, are getting only half of the wages that they were entitled to earlier. In such a situation, Modi’s Vision 2047 is nothing but a slaughter of human beings.

Against the backdrop of the implementation of neo-liberal policies, we are witnessing raging outbursts that are very spontaneous, momentary, anarchic and outside the purview of established trade unionism. We have learnt reports of an HR manager’s death at Pricol in Coimbatore. Two workers are still serving life terms. We are a witness to the incident in Yanam where the factory was burnt down by an angry mob. We have seen hundreds of workers languishing in jail as a result of developments in Maruti. We have seen workers teaching a lesson to the employer who indiscriminately fired at striking workers of a factory in NOIDA. These are not part of the struggles of established trade unions but are angry spontaneous outbursts of enraged workers. We are only afraid that if these point to the alternative models of struggles of desperate workers against the regime of industrial jungle laws like the Codes. The Modi-led BJP government is only advocating industrial anarchy against industrial democracy and is snatching away all possible avenues of legal remedy to the problems of workers.

In order to oppose the attacks of the Modi-led BJP government, the platform of Central Trade Unions has proposed an all-India workers convention in Delhi on 30th January 2023. The workers across the country will assemble to devise a counter strategy to fight out the attacks by the Modi government.

We appeal to workers to turn the year 2023 into the year of workers' struggles which can ultimately enable people to overthrow the Modi regime from power in 2024.

The farmers of the country waged a historic, yearlong battle at Delhi borders to force the Modi government to withdraw the pro-corporate, anti-farmer legislations. They were victorious in their relentless struggle. The workers too expressed solidarity with the struggles of farmers. The working class salutes the victorious farmers’ struggle. We also witnessed young women garment workers of Bangalore on a war path which forced the Modi government to withdraw the anti-worker circular on the PF issue.

But, workers, because of their nature of employment and livelihood, may not sit in the struggle for a longer period. But, a day will certainly come when workers will march to the Parliament, the corridors of political power. On that day, they will not only sit outside but would also seize and capture the parliament. They will capture political power. And on that day, they will pave the way for the emancipation of the working class from the clutches of the ruling classes, from their cruel exploitation, from the vagaries of the labour market. They will rewrite history. The days are not far away if the Modi government will continue to follow the beaten track of creating modern slavery.

I, on behalf of AICCTU, once again greet the 42nd all-India conference of AITUC a grand success!