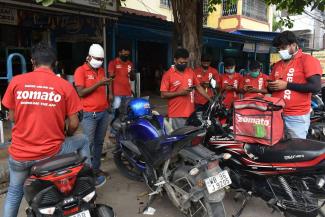 Gig workers are a category of workers who have been placed at the height of structural vulnerability and state failure due to collaboration between exploitative platforms and a crony corporate anti-people state. Though definitionally, gig workers are entitled to far-reaching protections under existing welfare legislation, they have been deprived of their rights through de-facto exclusion. With the advent of the labour codes, their exclusion is being codified.

While there is nothing new in the Union Government’s policy of precarity, the institutionalisation of fixed term employment, the entrenchment of rampant contractualisation and the commodification of labour has been seen in administrative and legislative changes across the country over the past few years. Similarly, gig workers are a massive category whose rights are being systematically negated. In fact, earlier this year, the NITI Aayog estimated that there were 77 lakh gig workers in 2020-21, which was expected to reach 2.34 crore by 2029-2030.[1] It is to this mass of workers, employed by platforms such as Uber, Swiggy, UrbanClap etc., that labour law protections are being denied.

The ground reality is that gig workers suffer from lack of steady wages, social security, paid overtime and safety mechanisms. A recent report prepared by the Indian Federation of App-based Transport Workers (IFAT) in collaboration with the International Transport Workers' Federation (ITF) in respect of Uber and Ola drivers found that 95.3% of workers completely lacked insurance - accidental, health or medical.[2] It was also found that a vast majority of workers suffered from occupational health issues, including backache, constipation, liver issues, waist pain and neck pain. It found that the insecurity of employment is an impediment in unionising and engaging in collective bargaining. Importantly, the Supreme Court has held that non-payment of minimum wages would amount to bonded labour – but gig workers are not even guaranteed minimum wages.

The corporates and the state operate under a fallacious assumption that the work performed by gig workers falls outside the ambit of existing labour legislation. Gig workers are termed as “partners” or “agents” instead of workmen, and the relationship between platforms and workers is not considered as a relationship of employment.

Is there an employer-employee relationship between the platform and the gig worker? If so, do gig workers fall under the ambit of existing law? Both these questions must be answered in the affirmative.

Whether or not there is a jural relationship of employer-employee between the parties is governed by a host of factors laid down by the Supreme Court in various cases. In different countries, the courts have developed different tests with many common factors. In India, some of the most common tests used to determine whether there is a relationship of employment are the following :

None of these factors in themselves is decisive, but the question is one of fact, which is to be decided by balancing all the factors.

In one case, the Supreme Court was looking into the question of whether agarias were workers.[3] These agarias were employed by salt companies, and were granted pattas of saline land from which to produce salt. The companies argued that such agarias were not workers/employees as they perform piece-rate work, and they are under no obligation to work for fixed hours or days and are to be paid wages not per day or hours. Hence, it was argued that the agarias are not workers, but could only be termed as independent contractors. The Supreme Court rejected this contention, holding that a person can be a workman even though s/he is paid not per day basis but by the job.

Importantly, the court also held as follows: “Rules regarding hours of work etc., applicable to other workmen may not be conveniently applied to them and the nature as well as the manner and method of their work would be such as cannot be regulated by any directions given by the Industrial Tribunal. These difficulties, however, are no deterrent against holding the agarias to be workmen within the meaning of the definition if they fulfil its requirements.”

In another case, the Supreme Court considered the question if bidi rollers were workmen, and held that if operation was of a simple nature and did not require supervision all the time, the control could be exercised at the end of the day by the method of rejecting bidis which did not come upto the proper standard. Such supervision by the employer was sufficient to make the workers, employees of the employer, and not independent contractors.[4]

Again, in another case, the Supreme Court held, “A person can be a servant of more than one employer. A servant need not be under the exclusive control of one master... There is, of course, no reason why a person who is only employed part time, should not be a servant and it is doubtful whether regular part time service can be considered even prima facie to suggest anything other than a contract of service,” while finding that tailors were workers.[5]

Recently, the UK Supreme Court has concluded that the Uber drivers of Uber would be workmen falling within the ambit of labour legislation, using similar tests of control and dependence.[6] Importantly, one of the factors that was considered was the heirarchical relationship between drivers and Uber. The court looked at the following factors:

The Court went on to hold as follows:

“it would be inconsistent with the purpose of this legislation to treat the terms of a written contract as the starting point in determining whether an individual falls within the definition of a worker. To do so would reinstate the mischief which the legislation was enacted to prevent. It is the very fact that an employer is often in a position to dictate such contract terms and that the individual performing the work has little or no ability to influence those terms that gives rise to the need for statutory protection in the first place. The efficacy of such protection would be seriously undermined if the putative employer could by the way in which the relationship is characterised in the written contract determine, even prima facie, whether or not the other party is to be classified as a worker. Laws such as the National Minimum Wage Act were manifestly enacted to protect those whom Parliament considers to be in need of protection and not just those who are designated by their employer as qualifying for it.”

Vitally, the court used the rule of purposive interpretation to interpet applicability of labour laws. It noted that the purpose of labour laws is to protect vulnerable workers, and held, “The reason why employees are thought to need such protection is that they are in a subordinate and dependent position vis-à-vis their employers: the purpose of the Regulations is to extend protection to workers who are, substantively and economically, in the same position.”

Gig workers in India fall within the same formula of control and subordination to platforms. They have no control over the employment contract, the remuneration, the penalties, etc. The IFAT report mentioned above discusses “the role of app-based companies in exploiting workers through an opaque algorithmic system, which determines who gets to work and how they will be compensated. These systems also determine penalties and grievance redressal, which have an impact on the occupational health and safety. Critically, the design of systems and logics of compensation are completely invisible to workers, undermining their capacity to protect their rights.”

The control and supervision levelled by the companies over these workers leads them to fall within a jural relationship of employer-employee. Having answered the question of jural relationship in favour of the workers, they would be entitled to all protections under existing labour legislation.

The Code on Social Security, 2020, defines a gig worker as “a person who participates in a work arrangement and earns from such activities outside of a traditional employer–employee relationship.” The Code also defines platform work as “a work arrangement outside of a traditional employer-employee relationship in which organisations or individuals use an online platform to access other organisations or individuals to solve specific problems or to provide specific services or any such other activities which may be notified by the Central Government, in exchange for payment’. Not only do the definitions of platform workers and gig workers overlap, but they are absolutely lacking in clarity of who such a worker is. The only concrete action appears to exclude such workers from the ambit of “employee”.

Thus, a formal employment relationship is now replaced by placing gig/platform workers on par with unorganised workers. Gig workers are to be registered under e-SHRAM [National Database of Unorganised Workers], and schemes for their benefit may be framed by the Government. The only responsibility of the management to the worker is contribution towards the fund, which will be between 1-2% of annual turnover, but shall not exceed 5% of the amount payable to gig workers / platform workers.

Importantly, the term gig worker/platform worker finds no mention in any of the other three Labour Codes. Effectively, these workers are placed outside the ambit of all protections, including maximum work hours, safety measures, payment of wage regulations, working conditions, standing orders and registered trade unions. They are also placed outside the ambit of industrial dispute resolution methods under the Industrial Relations Code.

In his reply to a question in Lok Sabha, the Labour Minister stated, “The Code on Social Security, 2020, envisages social security benefits through formulation of schemes for gig and platform workers. However, no scheme has been finalized as the provisions under the Code relating to gig and platform worker have not come into force. For the purposes of complaints, there is no definition of gig workers in the existing central labour laws.”[7]

The proliferation of gig workers through the development of digital platforms has been tainted by the anti-people regime. Though definitionally and through established criteria laid down by Supreme Court, gig workers must be considered as engaged in a relationship of employment and entitled to benefits, they have been deprived of their statutory dues by these platforms, which term them as ‘partners’ to deprive them of their rights. The State has also miserably failed to implement the rights of these workers, which is only to be expected in a capitalist regime that openly places the ease of business of corporates over workers’ rights. These workers, who have been entrenched in disorganisation and vulnerability, must fight to claim their rights, with support from all sectors of the working class across the country.