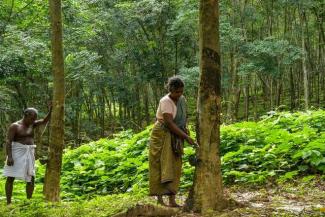 The state government owned Rubber corporation, producing natural rubber, is situated at Kanyakumari, the southernmost tip of the country. The plantation corporation started its operations since 1984 and is spread over an area of 4000 hectares. It is engaged in growing and maintaining the plants, harvesting latex from matured trees and in uprooting the aged trees. As per the company’s website it’s objective was to provide employment to the locals of Kanyakumari district and to adapt repatriates from Sri Lanka. It employs more than 2000 workers including field workers. But the official claim is only 800 daily wage workers and 400 casual workers.

CPIML and AICCTU units in Kanyakumari district found a massive corruption in plantations which was possible only if the top management and the unions operated hand in glove. In the course of enquiry, it was revealed that only a portion of the actually harvested latex reached the official records while the remaining was being eaten away by the corrupt officials. There were also fraudulent means adopted in the export to a Korean company. In 2018, large number of rubber trees were uprooted because of Okhi cyclone and the management - contractor nexus made huge money by selling them by fraudulent means. Money was being swindled in the name of maintenance.

On the other hand, we also found records for distributed umbrellas and bed sheets to workers which never was. Workers' colonies are in a dilapidated condition. Mandatory ESI benefit is not provided to workers while the ESI hospital did not even have medicines for venomous snake bites or animal bites which are quite common. More than 16 unions are operating in the plantations but none of them raised the issues of massive corruption.

In the meantime, we exposed the corruption in tender process in media at an appropriate moment with substantial evidence. We also filed writ petitions in the Madurai bench of the Madras High court to stop the scam and save workers and the state run corporation. On one such petition, the High Court ordered the executor of a tender to pay 10.75 lacs as compensation.

We supported workers when struggled for the implementation of wage revision as per settlement and organised solidarity movements. In this process, few hundreds of workers, disappointed with established unions, joined our union affiliated to AICCTU.

We are preparing for a bigger battle to ensure better wages, better working and living conditions of workers and to save the corporation from the nexus of corrupt bureaucrats and contractors.