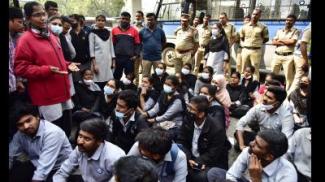 With inflation at an all-time high and the stagnation of wages, Britain has witnessed several workers strikes for the past couple of months. The British Rail workers have begun 2023 with a week-long strike from Tuesday, thus disrupting railway services to all those returning to work from the Christmas vacations. There have been several rail strikes in the recent past, and workers in ports, telecommunications, postal, nurses, airport staff, paramedics, teachers, among others have joined the demand for higher pay to tide over the skyrocketing inflation, which is at a 40-year high, reaching 10.7% in November 2022.

As part of the ‘Make Amazon Pay Coalition’ – a global movement protesting against the e-commerce giant, covering 40 countries, workers in India joined this movement as well. ‘Make Amazon Pay’ is a coalition of over 80 unions, civil society organisation, environmentalists, including greenpeace, Amazon Workers International, etc., and is co-convened by UNI Gobal Union, who are demanding that the workers be paid fairly and that the right to collectivisation be recognised, along with showing its commitment to environmental sustainability. In India, the Indian Federation of App-based Transport Workers, Telangana Gig and Platform Workers Union, Hawkers Joint Action Committee and Gig Workers Association planned to join the protest, which includes gig-workers and street vendors from Maharashtra, West Bengal, Bhopal, Bihar, Uttar Pradesh, Rajasthan, and Uttarakhand.

The Union Minister for Labour Bhupender Yadav has said that retrenchments and lay-offs have to be carried out as per the law laid down in the Industrial Disputes Act, otherwise the same would be illegal. He made the statement in light of the multiple lay-offs in multinational and prominent Indian companies (Wipro, Byjus, Unacademy, etc.) in the country. He stressed on the re-employment of retrenched workmen, while responding to questions during the session in Rajya Sabha, and added that the state governments are the jurisdictional authorities in sectors of EdTech, social media, information technology and other such related sectors. He added that the Union government has not maintained any data on mass retrenchments in regard to the digital/technology sector.

Meanwhile, the Minister for Information Technology Rajeev Chandrashekhar has said that the government “probably cannot intervene” to stop lay-offs in the IT sector, but is working to ensure that the unemployment caused due to the job losses are “soft landings”. He said that the “laid off employees are talented people and they will land on their feet and find their place somewhere else”, and that the government has spent Rs. 460 crore to start a digital platform called ‘FutureSkills Prime’ to allow for youngsters within the industry to look for alternate skills and to generate opportunities.

The statement of the Labour Minister comes at a time when the labour laws have been overhauled to favour companies and the rate of unemployment is at an all-time high. In the recent past, several thousand people have lost their jobs due to lay-offs in companies like Facebook, Twitter, Google, Microsoft, Byjus, Wipro, Pepsico, etc.

The ticketing staff of Hyderabad Metro Rail Limited boycotted work on January 3rd, 2023 and went on strike demanding an increase in their wages, which affected the train operations across 27 metro stations, which therefore witnesses long queues and crowding at the station. The workers have not received a hike in their wages for the past 5 years, and have faced difficulties due to non-payment of salaries. They are currently being paid Rs. 11,000/- and are demanding a basic pay of Rs. 18,000/- per month. The workers said that their working conditions were abysmal, including delayed salaries, no weekly offs, no lunch breaks provided, etc., and that their grievances were not being addressed by the Management. The ticketing staff are all employed through an agency of sham contractors.

The Government of West Bengal announced in November 2022 that they will fix minimum wages for domestic workers within three months from the already published date of the gazette notification, and that they will be included under the Minimum Wages Act, 1948. Several states like Delhi, Kerala and Tamil Nadu have already prescribed minimum wages for domestic workers. Domestic workers earn meagrely for long hours of work, and face severe caste, class and gender oppression and exploitation during the course and due to their nature of work. They work without weekly holidays or any other employment benefits. The domestic workers’ unions have sought for Rs. 75 per hour to be set as the minimum wage and for four days holiday per month.

The implementation of the Mahatma Gandhi National Rural Employment Guarantee Act was implemented from 2005 and the Central Government has now constituted a committee to review the implementation of the scheme which guarantees 100 days of employment per year for every rural household. The Committee, headed by the former rural development secretary to the Union of India – Amarjeet Sinha will look into how the NREGA can be made more effective and what changes can be brought in in terms of focus and governance structures, and will also look into the “cost of providing work which has increased since the scheme was first implemented”. Reports state that in the financial year 2020-21, the number of person-days of work provided stood at 389 crores, as compared to 2021-22 when the demand for NREGA stood high creating 363 crore person-days of work.