Stop the “Survey”, Another Name for Denial of Welfare! 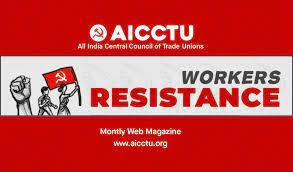 AICCTU demands Tamil Nadu government to stop the state level survey regarding welfare board pension beneficiaries and to withdraw the GO 115 and 152 which allows outsourcing in place of vacancies of permanent workers.

The construction and other unorganised sector welfare board members of Tamil Nadu are entitled to a pension of Rs.1000 per month if they fulfil the eligibility criteria stipulated by the board.

The state labour commissioner, by his order dated 2.12.2022, has instructed the district board authorities to re-apprise the pensioners with field survey. Directive is being issued to survey each pensioner with a 11 point questionnaire which includes questions reg the income of the family APL/ BPL, number of gas cylinders, value of the property they own (10 L or above), linking of Aadhar, etc., among others. The officials are also instructed to take a photo with the pension beneficiary during the survey and get it pasted in the survey form.

The pension benefits are distributed only after verification by the board officials after ascertaining truthfulness of the claim. Ordering one more survey, that too without the approval of welfare board of trade union representatives, smacks of foul play. It appears that the government has ordered the survey with an ulterior motive to illegally snatch away pensions of the senior workers.

The state Unit of Tamil Nadu AICCTU has protested the attitude of the government and has also issued a press statement to stop  the survey forthwith. Demonstrations are planned in front of welfare board offices of the districts.

The GO 115 and 152, are allowing outsourcing in place of permanent vacancies of sanitation workers and drivers in local bodies. AICCTU calls upon the state government to withdraw these anti worker orders as it would mean a great social injustice against workers by a government of much trumpeted Dravidian model.