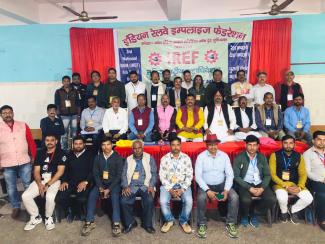 The 3rd all-India Conference of Indian Railway Employees Federation (IREF), affiliated to AICCTU,  was held successfully on 11-12 December 2022 at Dhanbad, Jharkhand. The conference began with an open session of well decorated mass meeting on 11th, against New Pension Scheme and Privatization of Railways. The mass meeting concluded with a clarion call to wage a determined struggle against the attacks on working class by Modi led BJP government.

The mass meeting was inaugurated by the General Secretary of AICCTU, Rajiv Dimri, and was addressed, among others, by Sarvjeet Singh, the GS of IREF and Manoj Pandey, the president of IREF, Vijay Kumar Bandhu, the President of NMOPS (National Movement for Old Pension Scheme), Amrik Singh, the president of the Front Against NPS in Railways (FANPSR) and Vinod Kumar Singh, CPI (ML) MLA from Jharkhand.

The Delegates session began in the evening with inaugural address by Rajiv Dimri, followed by presentation of work report by Sarvjeet Singh. After deliberations and contributing to enrichment of report by several delegates, the report was passed unanimously. Followed by this, a 65-member national executive committee was elected. Manoj Pandey and Sarabjeet Singh were re-elected as President and General Secretary of IREF. More than 200 delegates participated in the conference.

Congratulating the newly elected committee, Rajiv Dimri said that IREF has been able to develop and assert its identity of an alternative federation in Railways, in a situation when all major and recognized unions have surrendered before the anti-worker policies of government. IREF, through its consistent struggle against privatization, including 100-days Action Plan and National Monetisation Policy, has championed the cause of young employees, who are affected the most by NPS. IREF has also emerged as the only federation fighting for the cause of contract labour in various zones. He Underlined the role of IREF as the first federation in the current situation to take an exemplary initiative of launching NMSR (National Movement to Save Railways).  NMSR was launched with the aim of uniting Railway employees and common masses against the privatisation of railways. He called upon railway workers to make it a mass movement against the sell-out of railways by the Modi government.  He also emphasised the need for strengthening and streamlining the organisation as a pre-condition for raising the struggles to newer heights and for establishing IREF as a real alternative centre, in the coming days.

The conference concluded with passing of resolutions against the NPS, rampant privatization of railways, contractualisation of workforce, 4 labour codes, etc. The conference also resolved to stand in solidarity with the struggling workers of railways at international level. Comrades from Dhanbad were felicitated for playing a major role for the successful conduct of conference at the end.

[Presented at the 3rd all India Conference of IREF (Indian Railway Employees Federation), affiliated to AICCTU, at Dhanbad on 11-12 Dec. 2022]

The present situation is characterised by unabated corporate-fascist onslaught on lives, livelihood and rights of the working class and the toiling masses, on our national property and resources, on the secular fabric, constitution, and democracy. The declining Indian economy coupled with back-breaking price rise, loss of income and wages, rising hunger, malnutrition, inequality and poverty, record unemployment with massive destruction of jobs and retrenchment, all-out contractualisation of workforce, etc., have become a hallmark of the Modi government. In fact, the Modi govt. has become a synonym of devastation and destruction.

While workers and toiling masses continue to suffer, the Modi government is working overtime to snatch workers’ rights through implementation of 4 labour codes, to pursue the drive of unbridled privatisation and to gift away the nation’s property and wealth through National Monetisation Pipeline to his friends like Adani and Ambani. From Notebandi (demonetisation) to cruel and whimsical deshbandi (Lockdown) - the policies and measures of the Modi government have proved to be catastrophic to the lives and livelihood of working masses. Particularly, the Covid crisis and lockdown were used by the sadistic Modi as an opportunity to aggressively force its corporate, anti-worker agenda. Today when the economy is nose-diving, the entire burden of Modi-made crisis is being shifted on to the shoulders of toiling people.

The country is plagued by unemployment. More than 20 crore workers have lost their jobs in last few years. 8 years of Modi regime has taken the unemployment rate to around 8 percent. The posts in the government departments are being done away with. Even in the post-COVID period, the contractual and other informal workers are being thrown out of jobs in thousands. In this situation, Modi government’s “Rozgar Mela” (Employment Fair) is nothing but a mockery, a contempt for the unemployed. After more than 8 years in power, Modi govt. has offered a ‘gift’ of just 75,000 jobs in place of 16 crore jobs (2 crore per year) that he promised in 2014.

On the other hand, the earnings of 23 crore workers are depressed to levels much below the prevalent statutory minimum wages. Modi’s promise of providing Lockdown wages to workers never saw the light of the day. India’s downslide on the Global Hunger Index continues uninterrupted.

The 4 labour Code Acts, along with FTE (fixed term employment) that force workers into slavery, have been enacted by way of repealing 29 existing labour laws. These codes will snatch away all the legal protection and rights. The government claims that they are the “New Codes for a New India” but actually they are the “New Codes for a Corporate India” enacted to facilitate the corporate mantra of ‘Ease of Doing Business’. Also, EDSA (Essential Defence Services Act) was brought for one year to snatch away the right to strike including protest by Defence workers.

The unbridled process of privatization has, through the policy of Monetization (NMP), reached the level of virtual free sale of all public and national property to the corporates (including sectors of strategic importance life, like Railways, Defence, Banks, Insurance, Mining, etc.).

The rampant contractualization of work force has reached the extreme level of contractualizing the jawans of Indian Army, in the name of Agnipath, putting an end even to the dream of permanent and dignified job in the Army.

As these miseries aggravate and attacks escalate, the Sangh brigade-Modi regime, especially in view of coming 2024 parliament elections, is leaving no stones unturned in fomenting communal hate and polarization on a regular basis centring on the politics of Hindutva. This is clearly a nefarious design of the Sangh Brigade - Modi regime to divert the attention of working people from their real issues and struggles, to side-line them and to divide their struggling unity. At the same time, the Modi regime is stifling the voices of dissent and protests with all kinds of repressive measures, branding any opposition to its policies as anti-national activities. Under the said plea, the government is making indiscriminate use of repressive Acts including UAPA. Thus, a regime of Hitler-shahi is being desperately established in the country to confront the rising people’s issues and movements against the Modi regime. So, while resisting the pro-corporate agenda and repressive Raj of the Modi government, in equal force, the working class should also combat and thwart the all-pervasive communal agenda of the Modi government.

Braving the combined onslaught of corporate capital and repressive Modi regime, the working class is resisting these attacks at various levels unitedly and determinedly. In recent past, the platform of ten central trade unions which includes AICCTU, organized a series of strikes apart from other forms of protests, including successful all-India strikes on 8-9 January 2019, 8th January 2020, 26 November 2020 and the latest one on 28-29 March 2022. Also, various sections of working class – from organised to unorganised and contractual - came to roads in protests which also include massive country-wide strike actions by workers of Bank, Insurance, Coal, Defence and Scheme sectors. The state govt. employees in different states and Vizag steel plant workers waged relentless struggle against privatization.

In the meantime, the historic farmers’ movement has forced the Modi government to repeal 3 anti-farmer Acts. Forced by the movements of working class and the youth, the issues like unemployment, price-rise, restoration of OPS, etc., have been able to find their echo in political discourses, in several assembly elections in this period. Some non-BJP state governments have also gone to the extent of declaring withdrawal of the NPS. Also, the central government has been forced to slow down or defer some of its pro-corporate measures. Amid these struggles, the IREF has played a leading role in resisting the ongoing privatization / corporatization and the latest attack of National Monetization Pipeline in Railways, apart from struggle against NPS.

But, decisively pushing back the Modi government’s blatant corporate agenda still remains the major task before the working class movement.

Definitely, the working class movement today is facing the most difficult situation and serious challenges ever. Only through the united struggles of workers and other sections of the people, the bulldozing by Modi Government on the livelihood and rights of people, its destructive policies, its communal, divisive and fascist designs can be stopped, and finally, the anti – people government can be ousted.