The COVID Pandemic and The Impact on U.S. Workers 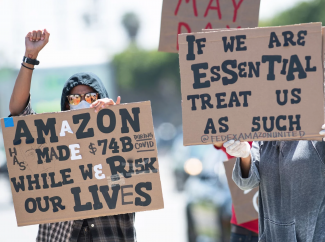 The World Health Organization (WHO) declared a Global Health Emergency from the novel coronavirus/COVID outbreak on January 21st, 2020. It was only declared a US national emergency on March 13th and, subsequently, billions of dollars in federal funding were promised to fight the disease’s spread. As of June 2021, there have been close to 35 million COVID cases and nearly 615,000 deaths in the U.S., the richest country in the world. COVID related deaths have fallen since January 2021 as millions of Americans have been vaccinated. This article will give a snapshot of how workers were affected, what measures were taken by the government, and who benefitted from the pandemic.

The Guardian newspaper's project, ‘Lost on the Frontline’ that was released recently, documented 3600 healthcare workers in the U.S dying from March 2020 until April 2021.  A key finding is that Asia/Pacific Islanders and black people accounted for nearly 50 % of the healthcare worker deaths while accounting for 20% of the U.S. population. Nurses and support staff died in large numbers. 70% of the healthcare workers' deaths occurred outside the big hospitals, largely, in nursing homes and elderly care facilities. There were widespread shortages of masks, personal protective equipment (PPE), lack of COVID testing and grossly inadequate safety regulations in place.

Immigrant workers, who are close to 23 million, represent 1 in 5 essential workers. These workers were on the frontlines during the COVID pandemic in sectors like medical, agriculture, food services, transportation and health care. 5 million workers who were 'undocumented' (they have been disparagingly called 'illegal aliens') risked their lives for the country.

There are more than 2.5 million workers in the grocery and food industries. United Food and Commerical Workers Union (UFCW) represents 1.3 million workers in grocery stores, meat packing, food processing and other industries.  More than 90,000 of these workers have been infected or exposed to the virus with close to 500 deaths. Researchers looked at death records from California Department of Public Health and estimated that during the pandemic there was relative excess mortality in certain professions in the working age group. When 2020 is compared with 2018 and 2019, mortality was extremely high in food/agriculture workers (39% increase), transportation workers (28% increase), and manufacturing sector workers (23 % increase).  When they stratified the excess mortality based on race, Latinx workers had experienced 36% increase and Black workers had experienced 28% increase in mortality as compared to 18% increase among Asian workers and 6% in White workers. In all races, food/agriculture workers experienced the highest increase in mortality.

Union Benefits during the Pandemic

The U.S. has close to 160 million people in the work force.  According to the Bureau of Labor Statistics, 9.6 million people in U.S are self-employed. About 25 million people are in government jobs, which includes also the military. More than 120 million workers are in the private sector. The union membership rate in the public sector, excluding the military, is 34.8% vs 6.3% in the private sector. About 1 in 8 essential workers in food services and agriculture and 1 in 10 in healthcare were covered by a union contract. Between April and August 2020, COVID related safety complaints increased by 350% in workplaces per Occupational Safety and Health Administration. Workers represented by unions fared significantly better during the pandemic than non-union workers. In the private sector, health care, social assistance, transport, warehouses, the job loss rate was lower in the year 2020 than in industries such as leisure and hospitality not represented by unions. International Long Shore Workers (ILWU) represents around 45,000 dockyard workers in the West coast. ILWU has a glorious history of showing solidarity with oppressed people around the world - its workers showed solidarity with Palestine by refusing to unload an Israeli ship in Oakland earlier this month. The union also takes care of its workers well, it negotiated for protective equipment and procedures with its employer Pacific Maritime Association (PMA). This resulted in significantly less morbidity and mortality to their workers. 94% of workers who had a union contract had access to health benefits from employers, compared to 68% of non-union workers per research published by the Economic Policy Institute. 90% of union workers were eligible for pay during sick time, compared to 73% of non-union workers.

Just before the pandemic hit in March 2020, 200,000 workers were filing for unemployment benefits in the U.S. The figure skyrocketed to 2.9 million workers filing for unemployment benefits on March 21, 2020.  The unemployment rate jumped in April 2020 to 14.8% a level not seen since the 1930s. The Coronavirus Aid, Relief, and Economic Security Act, known as the CARES Act enacted by the U.S. Congress on March 27, 2020 released a $2.2 trillion coronavirus stimulus package. There was one-time $1,200 'stimulus' check for most adults, with $500 more per child. In addition, $600 was added to state unemployment benefits. Combined state and federal assistance were instituted with the intent to enable Americans who lost jobs to have food, heat and electricity and pay rent. However, systemic racism and inequalities continued to plague the system during the pandemic. Only 7% Latinx (people from South and Central American ethnicity) workers received unemployment insurance (UI) although they accounted for 25% of the unemployed. Unemployment rate amongst Black workers has been 73% higher than white workers. Half a million black women and 3.5 million women in total, lost employment during the pandemic last year. Decades of neglect of government unemployment offices has led to inadequate and delayed response to workers' needs. Even though, $ 9.5 billion was meant for agriculture sector, still a significant number of farm workers, who were undocumented, had no relief.

Due to ongoing hardships, even as COVID cases have fallen across the states, President Biden signed into a law, the American Rescue Plan Act of 2021 on March 11. This $1.9 trillion coronavirus relief package was passed with the goal of boosting the economy and providing help to ordinary Americans. The act includes $1,400 payments for most Americans as well as other assistance to struggling households. The Center on Budget and Policy Priorities has been tracking hardships faced by Americans and reports that 20 million adults have not had enough to eat and 10.5 million adults are unable to pay rent. Black and Latinx people were more likely than white people to report lack of adequate food to eat- 15 percent for Black adults and 17 percent for Latinx people, compared to 7 percent of white people.

The CARES act and American Rescue Plan Act have helped Americans to some extent from going hungry, however, benefits are not enough and there is inadequate infrastructure and safety net to take care of the poor and undocumented immigrants. While millions of Americans suffer from unemployment, the inability to pay rent and the lack of free and accessible health care, the collective wealth of American billionaires increased from $2.95 trillion to $4.56 trillion (between March 18, 2020, and April 12, 2021). Amazon founder Jeff Bezos's wealth has increased to $161 billion while more than 20,000 Amazon workers were affected by COVID.

The late Richard Levins, scientist and Marxist, wrote an article in Monthly Review more than 20 years ago, titled "Is Capitalism a Disease?". He talked about the poor state of public health care in a technologically advanced country.  He also referred to the extremely profitable pharmaceutical industry in that article. The COVID pandemic laid bare everything he wrote from the unpreparedness of the U.S health care system to the massive profits it generated to the pharma companies. The National Institutes of Health, which is publicly funded, developed the technology that helped Pfizer and Moderna pharma companies to make the COVID vaccines. The U.S government has bought the vaccines from the companies to vaccinate the population free of charge resulting in huge profits to the companies. Pfizer reported that the vaccine brought in $3.5 billion in revenue in the first 3 months of 2021.

The COVID pandemic in the U.S is affecting millions of workers and has exposed the contradictions in the capitalist system and intensified the inequalities. The good news is that across the country support for labour unions at this time is extremely high. There have also been several demonstrations across states to highlight the housing crisis and cancel rent payments. Multinational demonstrations to end systemic racism and police brutality have erupted all over the country during the pandemic. While the US is far from any radical transformation in the 'Belly of the Beast', these struggles must provide the necessary revolutionary optimism. π