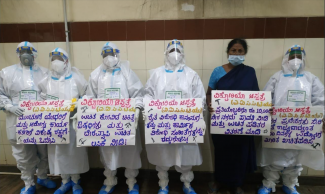 Tens of thousands of workers under various schemes of the central government observed country-wide Demand Day on 31 May 2021 as a response to a call by “All India Scheme Workers’ Federation” (AISWF), affiliated to AICCTU. Displaying their demand-placards, wearing black badges and raising slogans, scheme workers, including ASHA, Mamta and those in Anganwadi, Mid-day Meal, etc., observed Demand Day at their workplaces (PHCs) and residential areas. They also submitted memorandum addressed to the Prime Minister, Union Health Minister and State Chief Ministers.

On this occasion, AISWF National Convener and AICCTU Vice-president Shashi Yadav said that various sections of scheme workers are being forced to engage in Covid duty without any safety equipment and for a pittance. ASHA workers are being paid only Rs. 1000 as Corona allowance which is not even sufficient to pay rickshaw-tempo fares to move around in villages. Anganwadi workers and helpers are denied of this meagre amount also. Mid-day Meal workers are being forced to work but are not given any allowance. Mamata workers are working directly in Operation Theatres (OTs) but are also denied any allowance. The scheme workers did not even receive even their meagre amount for months and as a result, they are at the brink of starvation. The government considers scheme workers to be bonded labour with no rights and denied them applicability of any labour laws in the country. Scheme workers are getting infected and falling ill, but the governments make no arrangements for their treatment. A large number of ASHA and other scheme workers on Corona duty have died but the governments do not even care to have statistics for this. Worse still, they do not even get the benefit 50 lakhs insurance in case of Corona death.

Sanitation and various other sections of Municipal workers and contract Health workers employed in various government and private hospitals observed country-wide Demand Day on 3 June 2021 as a response to a joint call by “All India Municipal Workers’ Federation” (AIMWF) and Contract Health Employees Federation (CHEF), both affiliated to AICCTU. Displaying their demand-placards, wearing black badges and raising slogans, these workers observed Demand Day at their workplaces – gates of corporation offices, hospitals and in residential areas and protested against the complete failure of the Government to ensure their most fundamental and basic demands.

The Demand Day was observed in several states by several thousands of sanitation, municipal and health workers. Sanitation and other sections of Municipal workers demonstrated and displayed their demands placards in several districts of Bihar including Gaya, Siwan, Bhagalpur, Nawada, East Champaran, Motihari, Patna; Bangalore and other districts  in Karnataka; Dhanbad in Jharkhand; Coimbatore and Chengalpattu, Tenkasi, Namakkal Kanyakumari, Salem and Tirunelveli districts of Tamil Nadu; Allahabad, Kanpur in U.P.; Bhilai in Chattisgarh, Srikakulam and Krishna districts in Andhra Pradesh;  and Telangana, apart from other places.

Various categories of Contract health workers demonstrated and displayed their demands in Kalawati Saran Hospital and RAK College of Nursing in Delhi, NIMHANS and Victoria Hospital in Bangalore, District Government. Hospitals in districts including Dharampuri, Kanyakumari in Tamil Nadu, Eta, Allahabad, Kanpur, Raebareli in U.P., apart from other places. Demonstrations were also held at Srikakulam and Vijayawada in AP and at Palakurti, Janagaon dist of Telangana.

Frontline workers expressed their anger and resentment against the criminally insensitive and indifferent attitude of the central and state govts through their protest in the form of ‘Demand Day’. The governments at the centre and various states are denying all the rights while these workers are engaged in the frontline of the country’s war against Corona and also getting infected and dying in large numbers. They are neither provided any risk allowance, nor any proper safety gear and medical or life insurance.

They are not paid minimum wages, not provided any form of social security. More importantly, they work 24x7 without any security of life or job and under constant threat of termination. They are denied even the most basic of amenities including toilets, drinking water, etc. and are made to suffer in an inhuman and unhygienic working conditions. As if these indignations are insufficient, they are also the victims of the casteist and classist prejudices and biases of the state.

Free Vaccine for All!

Ensure availability of protective gear, equipment, etc. for all!

Railway employees observed “Black Day” on 25th June 2021, at the call of Indian Railway Employees' Federation (IREF), affiliated to AICCTU, against snatching away of DA (Dearness Allowance) and DR (Dearness Relief) of railway employees by the Modi government, under the garb of financial crisis and Corona Pandemic. The employees throughout Indian Railways organised decentralised, smaller gatherings, displayed demand placards and raised slogans demanding immediate restoration and payment of DA for railway employees and DR for pensioners, with arrears from January, 2020. They also demanded restoration of Old Pension Scheme (OPS) for workers who joined Railways on or after 01.01 2004 and also demanded withdrawal of government policy of corporatization and privatization in Railways.

Next Day, i.e., on 26th June, the “Front against NPS” in Railways, organised a twitter campaign demanding restoration of old Pension Scheme (OPS).

The sanitation workers of Municipality in Angul, Odisha, demonstrated on 19 June and began their strike against the highhandedness of contractor and executive officer and also demanding immediate payment of pending wages and providing vaccination and masks.

In Municipality of Angul, Odisha, the contractor did neither paid the wages, nor provided any vaccination to the sanitation workers who work even during Covid period. When the contractor did not listen to workers’ demands, the general secretary of the Safai Karamchari Union, along with other members, met executive officer for remedy but the competent officer too refused to listen and on the contrary, accused workers unionisation and union activities. He also abused and threatened the general secretary, Mithun Behera, of termination from the job.

As a protest, workers resorted to stoppage of work, led by the union president and AICCTU National Council Member, Tapan Mohanty. The contractor in order to thwart the strike by workers resorted to the unfair labour practice of bringing some outsiders. But the workers and the union effectively stalled the illegal action of bringing outsiders by the contractor. In order to suppress the movement and to finish off the union activities, the Executive Officer filed FIR against the GS Mithun Behera and two others. Undeterred by the management action, the union also filed counter FIR against the said officer and two other municipal staff. As of now, the work is stopped completely and workers are on strike.

Gearing Up Against the Codes…

The Labour Department of West Bengal government convened a meeting of all Central Trade Unions in the state on the issue of Central Labour Codes. The Labour Minister of the state and all officials of the labour department were present in the said physical meeting held on 21st June 2021.

The meeting started with a brief introduction by the labour commissioner, following power point presentation of all four labour codes. The salient aspects were pointed out, departure from the previous ones were mentioned and grey areas were also noted. In some cases, for example, on the question of framing Model Standing Orders, the power has now been grabbed by the centre violating norms of federal nature of the government structure. After each session, opinions were also sought from the trade union representatives.

All Central Trade Unions suggested to pass a resolution against the anti-worker Codes and the anti-Farmer acts in the state assembly and also insisted that the state government should honour the popular people's mandate against the policies of Modi government in the recently held state elections.

The leadership of INTTUC, the labour wing of Trinamool Congress, the ruling party, also strongly protested against the labour codes and in unison with other CTU's, resolved to fight the anti-labour codes. The labour minister indicated a positive approach and requested the trade unions to submit their concrete objection on the codes by the end of this month so as to help to articulate the government  stand.

A memorandum of objections to labour codes was also submitted to the Minister and Principal Labour Secretary. Comrade Atanu Chakravarty, state president and Nabendu Dasgupta, state secretary were part of the delegation on behalf of AICCTU. Other central trade unions, CITU, INTUC, AITUC, AIUTUC, HMS, UTUC, TUCC, and INTTUC also joined the all trade union delegation.

Weeklong Campaign against the DMK Government!

Tamil Nadu unit of AICCTU went on a weeklong campaign to highlight the demands of unorganised workers in the state, including workers of construction, beedi, powerloom, sanitation, civil supplies, electricity, call taxi and transport who are worst affected by Covid Lockdown. Workers of each sector demonstrated a day each since 15 June that culminated in a participation of thousands of workers on 21 June when the first session of the assembly led by DMK government in Tamil Nadu began. Corona relief of Rs.10,000 per month to all workers for a period of 6 months, Supply of food kits with essential commodities through ration shops, Free vaccination to all, Rs.10,000 per month for 6 months from the corpus lying with the construction workers welfare board were the main demands. The demonstrators also demanded relief to other welfare board workers through government grant, declaration of loadmen of civil supplies corporation also as frontline workers with government relief, etc. District units of AICCTU submitted memorandum to the newly elected members of the legislative assembly.

As a part of the call of central trade unions to express solidarity to the struggling farmers, AICCTU joined an impressive demonstration of farmers in front of the Raj Bhavan in Chennai. Comrade Eraniappan, Honarary State President of AICCTU addressed the gathering of farmers and workers on behalf of AICCTU.

As a part of 15-25 June, 10 days joint protest call by Central Trade Unions, ASHA workers from Chatrai Mandal raised voice against the anti-worker labour codes and for re-enforcing the inter-state labour laws. Comrade Pullarao addressed the protesters highlighting the demand for free supply of free ration, vaccines and health and life insurance facilities for all frontline workers.

Protests were held at Kakinada against the price rise of petrol and essential goods under the banner of CPIML and AICCTU. Comrade G Satyanarayana led the protest along with others.

The sanitation workers of RIMS hospital at Srikakulam were denied legally due minimum wages of Rs 16,000 per month as per Andhra Pradesh GO No. 549. RIMS sanitation workers, under the banner of AICCTU, won the struggle after a prolonged battle for implementation of the same. Finally, the management was forced to agree to increase minimum wages from the present level of Rs 11,000 to 16,000, as per the GO, along with all attendant benefits, including PF.  Hundreds of sanitation workers joined the victory public meeting held at Srikakulam on 18th June which was addressed by the district convener Comrade D Ganesh along with others. π