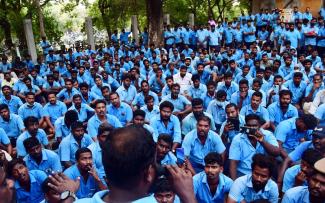 Over 1,500 workers, out of the 2,000 workers, of Chennai Metropolitan Water Supply and Sewerage Board held a protest in front of their headquarters seeking regularization of their jobs. These workers who are hired on temporary basis, render essential and continuous service, and have been doing so for the past several years. However, the apathy of the Board in disregarding their service and not making timely payment, ensuring other benefits, supplying them with safety gear such as boots, goggles and masks, providing uniform, among other concerns that were raised by the workers who sat in protest for over three days. The workers stated that despite having made several representations to alleviate their working conditions, the Board had turned a deaf ear consistently.

Occupational Safety a Must

We all read about the tragic death of 27 workers in the Mundka fire in Delhi, where a majority of the deceased were women workers. This has brought to light the horrible working conditions of many workers, which has resulted in workplace accidents and deaths and the apathy and the silent complicity of both the employers and the State. Lapses on part of the employers always go pardoned, whereas the workers’ family suffer from the loss of a loved one and a breadwinner. This has been repeatedly highlighted in case of death of workers during manual scavenging. While in the past two weeks, the media focused on the Mundka fire, there were several other incidents across the country, which did not make it to the national media, and yet brought out the unsafe working conditions of crores of workers whose cry for help has not and will not be heard. Three workers died in a factory plant owned by Zuari Agro Chemicals when the workers tried to cut open a gas tank with a flaming gas cutter, resulting in the fatal industrial accident. The Factories Department found several lapses on part of the company as there was no plant manager onsite to supervise the work. Three other workers sustained injuries in an explosion at the Tata Steel coke plant in Jamshedpur, during a dismantling process in a non-operational unit. In another incident in Kinnaur district of Himachal Pradesh, three constructions workers were injured and two others trapped when a tunnel for a hydro-power project which was under construction collapsed. Two other migrant construction workers who were working on laying sewerage pipelines in Bengaluru drowned to death after water from a drain flooded an underground pipeline. The two workers had gone 20-feet inside an underground pipe for welding work during the night and without any safety equipment, when a nearby drain overflowed due to the torrential rains in the city for the past two weeks.

Vedantu, an EdTech company, has fired over 600 of its employees, with 200 contractual workers in early May 2022, and about 424 employees a fortnight later, citing “volatility” in the EdTech market. It has been stated that the number of workers laid off amount to about 7% of their total workforce. Further, it has been reported that several start-ups companies like Byjus, Unacademy, Lido Learning, Meesho, Trell, Furlenco, and Vedantu have laid off close to 2,500 employees in the country. The EdTech companies have stated that after a 2-year long stint in rendering service for online education, schools have returned to normalcy post the COVID-19 situation, and therefore, these platforms have reported a decrease in the number of users. While the company has been quoted as stating that the war in Europe, fear of recession, and massive correction in stocks globally has led them to take this decision, it is undoubtedly the workers who are to bear the brunt of this sudden move of the company, especially due to the rising unemployment rate and unprecedented price-rise within India.

Despite the good revenue for the Tamil Nadu state government, the concerns of about 30,000 rubber plantation workers have been unaddressed for several years. Ailed by the lack of payment of minimum wages and other social security measures in Kanyakumari district, many of these workers in private plantations are afraid to raise their concerns for the lack of job security. It is said that the wages of the workers are fixed based on the market price of the rubber, which goes against the implementation of the Minimum Wages Act, 1948. Although trade unions work with a majority of the workers, there are various obstacles in unionizing workers in private plantations which are less than 50 acres in size, since the workers also face the continuing threat of losing their jobs if they demand higher wages, ESI facilities, EPF facilities and other benefits accrued to them. The workers have been seeking that they be protected against severe injuries, accidents, animal attacks, health-related issues induced due to the harsh working conditions, along with payment of minimum wages and other benefits.

The Calcutta High Court directed the West Bengal Government to release the dearness allowance and arrears of the same within 3 months of the order, which is to be calculated on the basis of All India Consumer Price Index average 536 (1982=100) commensurate with their pay as per the West Bengal Services (Revision of Pay and Allowances) Rules, 2009. The West Bengal Government had moved the High Court against the order of the West Bengal Administrative Tribunal which had directed the State Government to make payment of dearness allowances and that the claim of the state government employees is based on a legally enforceable right up to the extent of the recommendations of the 5th Pay Commission. The High Court reiterated that payment of dearness allowance reinforces human dignity under Article 21, thus becomes a fundamental right of every employee. It is quoted – “What we feel, apart from acquiring the enforceable legal right to get Dearness Allowance using the methodology of All India Consumer Price Index, such right of the employees to sustain their livelihood with human dignity has been fructified or elevated as fundamental right as enshrined in Article 21 of the Constitution. Such right available to Government Employees who are the main workforce behind the functioning of a Government in right direction cannot be denied by the State. As observed by the Pay Commission, we are of the same view that to pay respect to the statutory rights of the Government Employees to get DA Allowances at the rate as above, the Government must generate all its resources.”

[Judgment of the High Court of Calcutta in State of West Bengal v. Confederation of State Government Employees, West Bengal, in WPST 102/2020, dated 20.05.2022]

The Karnataka High Court held that the CEO, Mysuru Zilla Panchayat and the AEE, Panchayat Raj Engineering Sub-division, Piriyapatna to be jointly and severally liable to pay gratuity amount along with 10% interest from the date of joining employment till the date of retirement. The Petitioners in the matter, who were the employers, disputed that the workers were not eligible for gratuity as at the time of retirement, they had already been paid their pension amounts and gratuity. The workers contended that they were daily-wage labourers at the time of joining service, and were thereafter regularized. They said that the pensionary amounts and gratuity were paid by taking into account the period for which they were regularized, and not from their date of joining. Taking into consideration the same, the Court held that “Of-course on their regularisation, respondent No.1 were governed by the Karnataka Civil Services Rules (KCSR) and they have received pension and gratuity on their retirement. However, admittedly the petitioners paid gratuity only covering the period from the date of their regularisation till their retirement on attaining superannuation. While paying gratuity, the petitioners did not take into consideration the services rendered by respondent No.1 from the date of their appointment as daily wage workers till the date of their regularisation. During that period, respondent No.1 was not governed by the KCSR or for any other rules for payment of gratuity.”