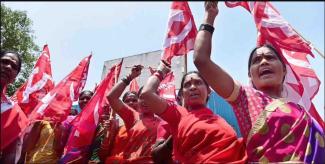 The Codes mandate prior publication of Draft Rules in order to ensure that the necessary sections of society are provided an opportunity to participate in its framing i.e. the consultative process. The value of a public consultative process prior to the making of delegated legislation cannot be understated. The Government has failed to ensure the publication of Rules in Kannada language, which amounts to exclusion of the vast majority of the working class, who form stakeholders in the present case. The failure to ensure the same deprives the working class across the State from participating in this Rule making process.

Objections to the Draft Code on Social Security (Karnataka) Rules, 2021

§  Sell or transfer property vested in it / acquired by it,

§  Do all things necessary for such purposes and for the purposes for which the said Social Security Organisation is established.

§  Invest any moneys vested in it, which are not immediately required for expenses properly defrayable

§  From time to time re-invest or realise such investments:

§  Constitute for the benefit of officers and staff or any class of them, provident or other benefit funds

This has all been made subject to the conditions as may be prescribed by the appropriate Government. By Rule 29 of the Draft Rules, these powers are delegated to the Board, and it is prescribed that these conditions shall be as decided by the Board by a resolution approved by not less than 2/3 majority. This is an impermissible sub-delegation and the Board, which is not subject to the mandate of prior public consultation etc. is granted these wide powers.

As per the proviso to section 7(3) of the SS Code, at least one member of the Board shall be a woman. This is absolutely inadequate, and does not correspond to the proviso to Section 6(12) in respect of Social Security Board, which mandates that adequate representation shall be given to persons belonging to the Scheduled Castes, the Scheduled Tribes, the minorities and women. The State should have prescribed better representation but the proviso to Rule 4 of the Draft Rules states that one member amongst the worker / employer nominees is to be a woman. This must be rectified.

As per section 6(13), the term of the State Unorganised Workers' Board shall be three years. However, in the Draft Rules, the term of nominated members has been made subject to the pleasure of the government. This must be amended to ensure that workers who raise issues are not victimized by removal from the Board.

In respect of BOCW (Building and Other Construction Work) Cess, previously, Union Government had framed Rules. As per the same, to file an appeal against an order, a deposit of 1% of the amount in question was required to be made. Now, the same has been reduced to 0.5% in Rule 27. The draft rules ought to be amended to maintain a deposit of 1% to prevent frivolous appeals.

Rule 10 contemplates outsourced staff of the Board. There should be no outsourced staff in a State body, and civil servants are required to be appointed as permanent staff. The increasing contractualisation of employment results in a grave insecurity of tenure to the working class, and the State as a model employer must rectify this and not to perpetuate the same.

There are a number of major gaps in the Draft Rules, that will result in denial of workers’ rights.

The lack of prescription in this regard will gravely affect the rights of the working classes.

The OSH Rules, 2021 in providing for an Inspector Cum Facilitator, has empowered the Inspector to photograph any worker in Rule 55, in complete violation of the right to live with dignity and right to privacy of the workers as protected in Article 21 of the Constitution. No such photography must be permitted save with the express informed permission of the worker. Further, Rule 55(4) must be amended to make it mandatory for the inspector to carry out an inspection upon receipt of a complaint, and must not leave it to the discretion of the inspector to decide whether or not an inspection is needed, as this defeats the very purpose of a complaint seeking inspection.

The OSH Rules, 2021 contemplate various registers to be maintained. However, the registers and forms, significantly dilute the protections present in existing enactments, and reduce to a great extent the compliances required by the establishments, in the name of ease of doing business. This only serves to the interests of the businesses and further the exploitation of already vulnerable workmen. For example, the registers fail to mention the number of adult workers, child workers, cleanliness, as required till now under the Factories Act, 1948, or the records of building workers including the number of hours of their work, work performed by them, day of rest etc. under the Building and Other Construction Workers (Regulation of Employment and Conditions of Service) Act, 1996.

Thus, in serving corporate interests, the OSH Rules, 2021 betray the working class and must be withdrawn.