Delhi Master Plan 2041 is Not a People-Centric Plan ! 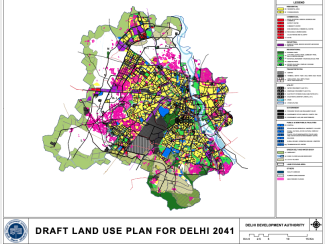 The draft, released at a time when the city is still recovering from the aftermath of the pandemic, sought suggestions and objections within 45 days and later extended for another 30 days on demand. The 450 page document is enforceable by law and valid for the next 20 years.

Delhi is one of the cities that witnessed an exodus of migrant workers during Covid lockdown due to housing issues, food insecurity and unemployment. Over 70% residential housing is still marked as ‘unauthorised colonies’ despite occupation for several decades. Absence of proper titles, particularly in resettlement colonies, have forced a significant population to live under constant threat of evictions. The recent demolition of Khori Gaon, in Faridabad city, has left more than1 lakh residents homeless. The DDA itself has been at the forefront of several demolitions of slums and housing colonies. A research report shows that in the last decade alone the DDA has demolished 7000 more houses than the number of houses it built.

A spatial assessment of informal settlement (JJ Colonies) has shown that only 0.6% of Delhi’s land is under “slums” whereas the area covered by a small car multiplied with the number of registered cars is about 2% of Delhi’s land (IIHS Working Paper). The master plan does not recognise informal housing in its land use surveys and label the residents as “encroachers” or “illegal / unauthorised” residents cutting off more than 30% of Delhi’s citizens from basic services like sewage, water supply, sanitation etc. Further, the plans have failed to control factories and landfills from flouting building bye-laws and development control norms leading to accidents and loss of lives. The master plan estimates the total housing stock needed till 2041 at 34 lakhs without providing break up on the types or affordability of housing. The basis of the calculation is not transparent. There is no guarantee of protection from eviction or proper rehabilitation.

The plan needs to focus on rental housing by reframing norms of spatial regulation, zoning and DCRs, encourage rental housing including inclusionary zoning as per new national rental housing policy, explore other forms of housing such as migrant housing, hostels, and accomodation for women, LGBTQ communities, dalits, and minority communities.

The draft talks about ‘fare rationalisation’ in the context of public transport instead of accessibility. The plan should focus on manifold increase in public transport and last mile connectivity to all localities.